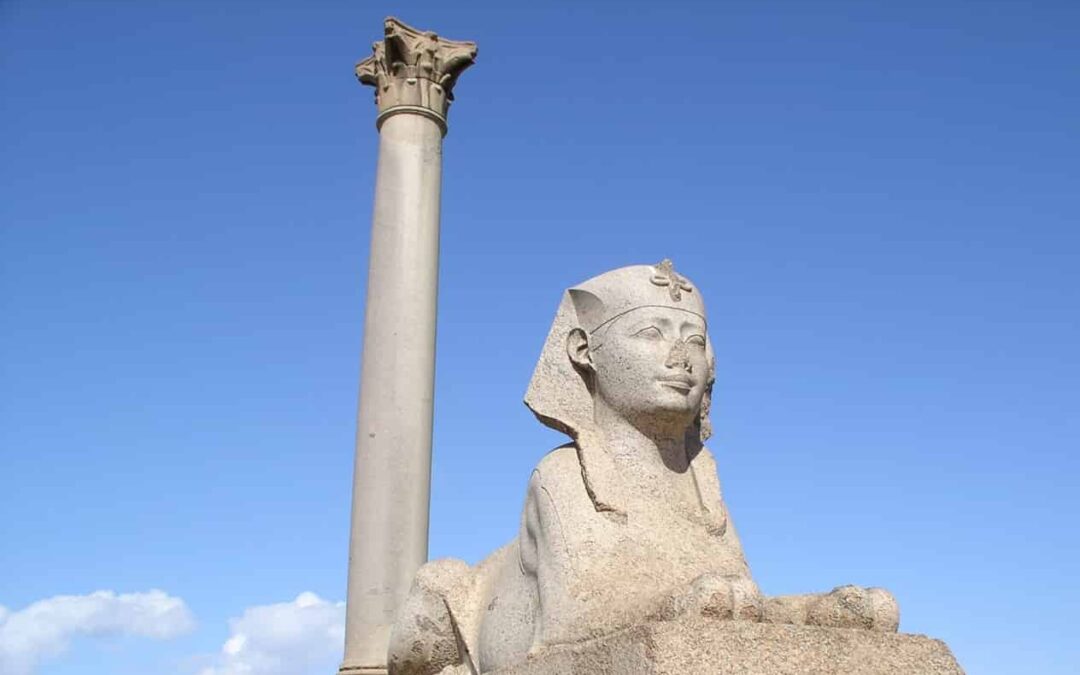 There are many Alexandrians founded by Alexander the Great along the itinerary of his campaigns (Alexandria Ariana, Alexandria Arachosia, Alexandria Bucephalous …). But none like Alexandria the Great. The so-called “Pearl of the Mediterranean” was the most important Greek city in Egypt and one of the most fascinating of antiquity.

As the capital of the Ptolemaic empire, it became the great cultural and commercial metropolis of the Mediterranean from the end of the 4th to the 1st century BC.

Two events defined the conquest of Egypt by Alexander the Great: Its symbolic legitimation, with the consultation of the oracle of Amun in Siwa, and the founding of Alexandria.

On the way to the Siwa oasis, Alexander decides to create a city that will constitute the crossroads between East and West. Thus, upon his return in April 331 BC, the foundation ceremony of the first great site that would bear his name takes place.

Its geographical and symbolic position prevailed in the choice of the place. The city would be born with an imposed vocation of a great maritime and commercial port open to the Mediterranean.

There was no other city in Egypt that could perform this function, since all the great urban centers of the Pharaonic era were traditionally located on the banks of the Nile.

Alexander chose a small fishing port called Rhacotis, located at the mouth of Canopus (today Abu Qir), west of the delta. This land constituted a wide and fertile strip limited to the south by Lake Mariout. Off the coast was the small island of Pharos.

The city was conceived as a true Greek polis, in an ambitious urban project designed by Alexander himself and made a reality by the Greek architect Dinocrates of Rhodes. Cleomenes was in charge of its supervision.

Planning began by enclosing the city behind strong defensive walls. The streets, wider than the traditional Greek ones, followed an orthogonal layout, forming rectangular grids, arranged in such a way that the north wind would cool the city in the hot summer season.

However, away from the arms of the delta, the lack of fresh water forced the construction of a supply channel that linked with the Nile.

This system was completed in the city with a complex network of cisterns that ensured the supply of drinking water to each house. The network was maintained until Ottoman times; today only some of the hundreds of cisterns that existed are preserved.

Alexander would leave Egypt in May of 331 BC to suppress a rebellion and continue their campaigns in Persian land. He would never set foot on Egyptian soil again or see his dream come true.

Since Ptolemy I, who had been general of Alexander the Great, took control of the Egyptian land, his recently inaugurated Lagid dynasty legitimized itself by presenting itself as heir to the Macedonian conqueror.

The Ptolemies focused their interest on Alexandria because it embodied the spirit and memory of Alexander. The city and its founder were to be indivisibly associated. It seems that this was the intention of Ptolemy I in having Alexander buried in the city he created.

He managed to “divert” Alexander’s corpse during the funeral procession on the way to Macedonia and take it to Memphis, from where it was finally transferred to Alexandria.

There, Alexander’s body would rest in a gold sarcophagus, later replaced by a glass one. According to some sources, it was placed inside the Royal Palace itself. In this way, the Macedonian king was definitely linked to the new royal house.

At present there is no archaeological evidence that reveals the original location of Alexander’s tomb, although written sources place it near the mausoleum of the Ptolemaic sovereigns, known by the name of Sema. However, the location within the palace complex appears to be the most likely.

Alexandria became the crucible of the Hellenistic world. The Greek historian Diodorus Siculus describes it in the 1st century BC as the first city of the civilized world, at the forefront in elegance, wealth and luxury.

The royal residence, a large complex enlarged in successive reigns, also housed the museum and library. The palace was also the scene of frequent assassinations of kings and princes, which characterized the Lagid dynasty.

Its primacy made it a great multicultural city. Alexandria was a city created to be lived and enjoyed by its citizens. Urban planning was based on the needs of its inhabitants.

It had a large number of public spaces (agora, racecourse, stadium, gym …), embellished in each reign. It was growing so fast that construction activity was frenzied, overlapping one building with another.

At the time of Cleopatra VII it was the most populous city in the entire Mediterranean, rivaling Rome. The population was grouped into five neighborhoods named after the first five letters of the Greek alphabet.

Its cosmopolitan character made it different from the populations of the rest of Egypt. It was divided into three large groups:

The dominant nucleus of Greek-Macedonian settlers, the only defenders of the right to citizenship; the native Egyptians, who occupied the neighborhood located in the old enclave of Rhacotis; and a large number of foreigners from all over the eastern Mediterranean (Persia, Syria …).

Alexandria became the main focus of Greek culture in the shadow of its museum and its library. Both institutions had, in addition to an academic purpose, a highly relevant political significance.

They masterfully embodied the ideology and politics of the early Lagids (The Ptolemaic dynasty).

The expansion of the collections of the library of Alexandria became an end in itself, and in this attitude the imperialist ambition of the Ptolemies is perceived.

Faced with such a volume of entries, the library was quickly overwhelmed. It became necessary to construct another building, which would eventually become an independent institution.

The activity of the museum and the library made Alexandria a center for the creation and expansion of the Greek heritage. This “Hellenism”, through culture and education, would be the reference and the unifying element for a society as heterogeneous as the Alexandrian.

Thus the void of a common tradition was filled. However, this cultural identity went through a rather exclusive attitude towards the non-Greek, that is, towards the properly Egyptian.

The "living" statues of Rahotep and Nofret