History of Julius Caesar and Cleopatra 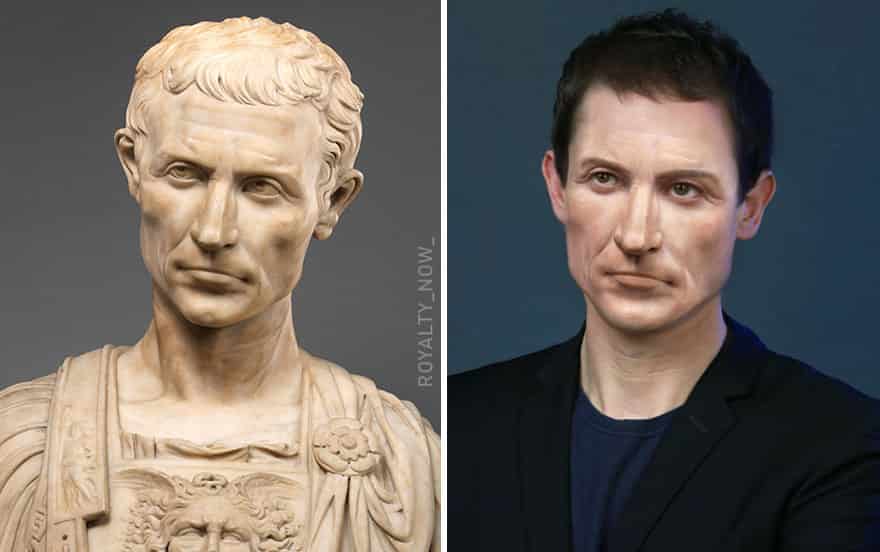 One of the most fascinating stories that they have given to write novels and have even been taken to the movies, is set in a real story.

In this article of Historicaleve we will focus on making a summary of the History of Julius Caesar and Cleopatra , who starred in one of the most important moments in the respective end stages of their different countries, as Cleopatra was the queen of Hellenistic Egypt, which would fall in the hands of Octavius in the year 30 BC While Julius Caesar was the figure that would end the Roman Republic and although this was killed by senators on March 15 of 44 BC left everything done for Octavius to end up being the emperor. Julius Caesar and Cleopatra: How they met

We do not know exactly how the first contact between the two dignitaries took place.

According to the history of Rome (and some of the remaining writings of Julius Caesar) it seems that Cleopatra would meet him around the year 48 BC at which time the Roman general had ordered Cleopatra and her brother Ptolemy to be reunited to put an end to the hostilities.

She, not trusting the aspirations of her brother’s agents, rolled herself up in a rug that was delivered as a gift in Caesar’s palace.

When opening it in his privacy, according to the story, the Roman general found Cleopatra practically naked, and ended up spending all night with her.

In theory it seems that Cleopatra was looking for allying with Rome to return to sit on the throne of Egypt that her brother had snatched.

Little else we know what was spoken in that room, but for the facts that we will continue narrating now in this summary about the history of Julius Caesar and Cleopatra, had to be also political issues, because from that moment they would become two inseparable.

After the first contact in his room, Julius Caesar  brought together all the brothers of queen Cleopatra and the same queen to end the problem of Egypt, which although being a separate kingdom, Rome had been designated by Ptolemy XII as legal guardian of the kingdom.

The problem was that after this distribution, none of the brothers was satisfied, so Arsinoe and Ptolemy XIII joined in rebellion against Julius Caesar and Cleopatra, and in that way although imprisoned by Rome, they were making a series of palace intrigues to put to the people of Alexandria against the lovers.

Thus, Aquilas (a general of Ptolomeo XIII) marched to the city with 20,000 soldiers of infantry and 2000 horsemen and completely surrounded the city.

During the course of the siege there was the fire of the port of Alexandria by order of Julius Caesar, where they were destroyed 72 Egyptian boats and 50 Roman triremes, to prevent them from falling into enemy hands.

This war lasted several months, during which Arsinoe managed to reach the rebel camp, where she was proclaimed queen of Egypt. After that, they won a series of battles and demanded that Julius Caesar release Ptolemy XIII.

Here we have to see the intelligence of Julius Caesar, who knew about the ineptitude of said teenager, whom he let go without any problem. After arriving at the camp of this, he was proclaimed king of Egypt and was put in front of the army.

Julius Caesar and Cleopatra had been waiting for their moment, as the reinforcement troops of Rome were arriving and when they arrived, it was the turn of the allies to begin the attack, causing the rebel army to retreat.

During this many drowned while trying to cross the Nile, and among them was Ptolemy XIII, who wore his golden breastplate, which was used by Julius Caesar to teach the people of Alexandria.

Thus the revolt ended and Cleopatra obtained the throne of Egypt in 47 BC in the same way Arsinoe was captured and sent to Rome to parade chained through the streets of the capital, in one of its triumphs.

And regarding Ptolemy XIV, being only 10 years old, he was allowed to live and he would also marry his sister (tradition in the family).

From the happy era to the murder of Julius Caesar

For a few months, the Roman general stayed in Egypt delighting in the Hellenistic culture, in addition to indulging in pleasure. From his relationship with Cleopatra would be born on June 23 of the year 47 BC Ptolemy XV, which was known by the inhabitants of the Alexandria as Caesarion.

After this, Julius Caesar left to carry out a series of campaigns, among which we find those that occurred in Ponto in the same year, 47 those of Tapso in 46 BC and those of Munda in 45 BC.

Between those stays even the queen of Egypt marched to Rome in two occasions accompanied by her son, one of them in year 46 BC and another one between 45-44 BC.

We have to know that Roman society never accepted the queen of Egypt among them, because they did not consider her legit, but Julius Caesar treated her as she was and even received official receptions; it is known that he put into the Roman pantheon the cult of Isis, as a sign of respect for his beloved.

The second trip of the queen of Egypt would end with the murder of Julius Caesar at the hands of the senators of Rome on March 15, 44 BC. Cleopatra and Caesarion had to march quickly back to Egypt to be safe.