Home / How Pyramids Were Built? 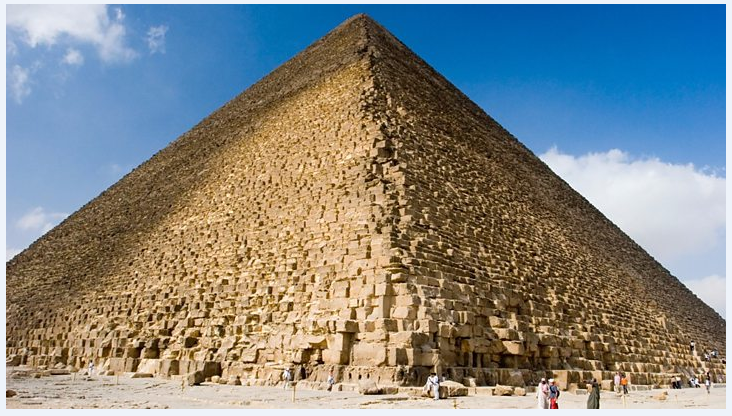 For centuries, people have racked their brains trying to figure out how the ancient Egyptians moved 170,000 tons of stone to the Giza construction site, but no one has come up with a credible answer until now.

What methods were used to build the pyramids?

This new revelation answers one the greatest mysteries in history. For a long time, archaeologists have known where the stones used to build Khufu’s pyramid we quarried.

The limestone came from 8 miles away in Tura, and the granite, from as far as 500 miles away.

How such large blocks of stone were transported across such long distances has always puzzled the archaeological community.

A group of archaeologists finally discovered the answer to this 4500-year-old puzzle hidden under the sands of the Giza pyramid complex.

Here, they unearthed an ancient papyrus, a system of canals, and the remnants of an ancient boat.

According to Pierre Tale, who deciphered the manuscript, the group realized that very same day that these three artifacts were the final pieces of the elusive puzzle.

Not only was the papyrus the oldest Egyptian document ever discovered, it also gave an eye-witness account of how the Great Pyramid was constructed.

What’s more, the boat and canals confirmed its claims.

What the Papyrus Revealed

The elated archaeologists discovered that the papyrus was authored by Merer, who supervised 40 sailors during the construction of the pyramid.

He narrates how thousands of supervisors like himself transported the blocks of hewn rock down the Nile and to the construction site.

More importantly, he narrates how the boats navigated through the canals dug right to the base of the pyramid, and he even describes the how boats were constructed from wooden boards held by twisted ropes.

He then goes on to state that the blocks were delivered to an inland port at the base of the pyramid for two decades, which was how long it took to construct the pyramid.

To the delight of the group, Merer’s description matched that of the network of canals and boat they had discovered.

Using the papyrus, the archaeologists pieced together the previously unknown details about how the pyramid was constructed.

Headed by Mark Leher, an experienced archaeologist, they even believe that they’ve identified where the inland port was, at the central canal basin at the plateau just off the Giza pyramid complex.

Can we build pyramids?

01 The great pyramid base

Consistent with Houdin, the great pyramid’s base was built the usage an external ramp till the base reached a height of about 60 meters.

Employees then slowly broke down the external ramp and used its blocks to build the rest of the great Egyptian pyramid.

As employees persisted building the rest of the great Egyptian pyramid, in addition they built and used an inner ramp to haul the heavy blocks.

This allowed them to construct the pyramid from the inside out. After the center of the great Egyptian pyramid became completed, employees filled inside the corners that had formerly held cranes.

Egyptologist Bob Brier located one area at the pyramid’s exterior that can be evidence of this type of corners. Primarily, the dissenter of the Egyptian pyramid was additionally covered with casing stones, which gave it a smooth look. Layout of the Egyptian Pyramid of Khufu

The Great Pyramid has each ascending and descending chambers Layout of the Pyramid of Khufu

This is the primary chamber of the great pyramid. Not like later pyramid chambers, its walls are blank.

A granite sarcophagus sits interior, however no lid has ever been discovered.

The name of this chamber is a misnomer. Many Egyptologists consider that it was initially constructed for King Khufu.

But, as he became still alive when the chamber was completed, it became abandoned.

This chamber lies underneath ground level.

It could were constructed in case King Khufu died early, however he might have also actually changed his thoughts about in which one he wanted to be buried.

Houdin believes that those chambers have been constructed to relieve weight on the King Khufu’s Chamber.

Others have thought that they had been for ventilation or to permit King Khufu’s soul to rise to heaven.

This lengthy, tight room slants upwards. It has a cor belled ceiling and benches along its sides, with slits reduce into every bench.

Egyptologists aren’t quite certain about its usefulness.

06 The entrance of the great Egyptian pyramid

The entrance wasn’t created till 820 CE by the order of Caliph Al-Ma’mum, who tunneled into the Egyptian pyramid so they may look for treasure.

The original entrance became sealed after the pyramid’s finishing touch.