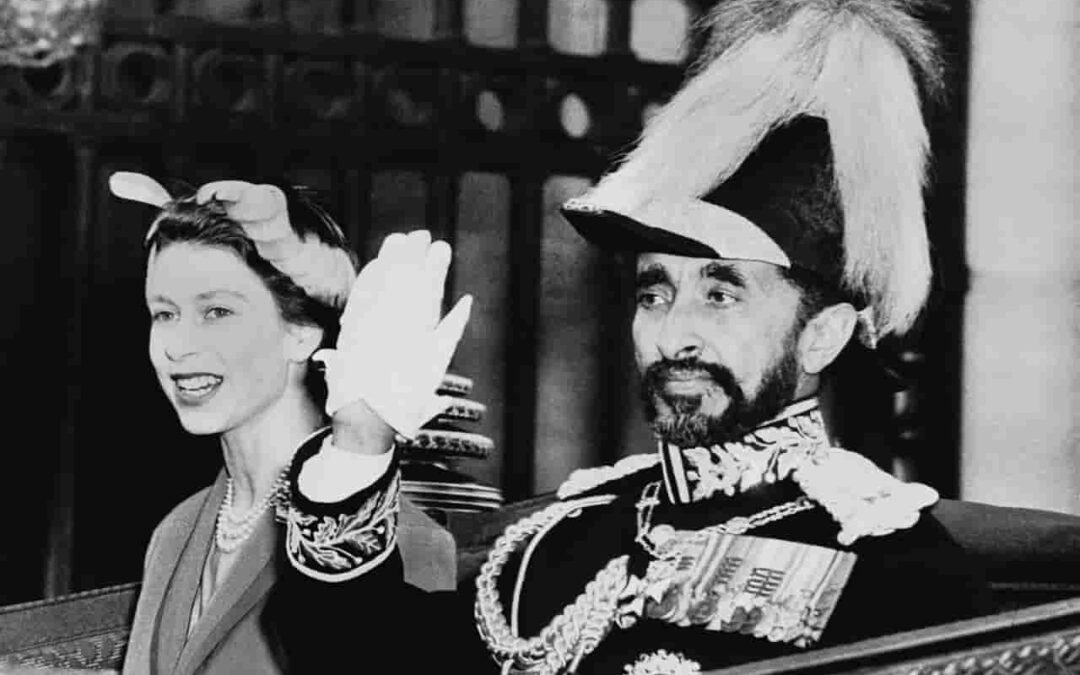 The Ethiopian emperor was a great African leader and a tireless fighter against colonialism, but he was also accused of ruling in an authoritarian and capricious way.

King of kings, Lion of Judah, Chosen of God or Most High Lord. Such epithets were used to target the ras (prince) Tafari Makonnnen, who was emperor of Ethiopia from 1930 to 1974 under the name of Haile Selassie I.

He was idolized by his citizens and by much of Africa subjected to Europeans, and even inspired a religious and racial liberation movement on the other side of the world, Rastafarianism.

But this image has been veiled by the caricature of a capricious autocrat capable of letting his little dog urinate on the shoes of the highest officials present at official receptions, who were forbidden to make the slightest gesture of protest towards the animal.

This anecdote illustrates the erratic behavior and bordering on the madness of His Most Sublime Majesty, described by the Polish correspondent Ryszard Kapuściński, who met with former courtiers who told him of the monarch’s decrepit attitude that plunged the country into chaos that would eventually cause his overthrow; some stories compiled in an essential book: The Emperor.

Who was the real Haile Selassie? The modern statesman revered by Jamaican anti-colonialists and Rastafarians or the character described by Kapuściński? He surely had a little (rather, a lot) of both.

Tafari (whose name means something like “Creator”) was born on July 23, 1892, and from a young age he gained the trust of Emperor Menelik II, of whom his father, Ras Makonnen, was an advisor.

His position was reinforced when he married Menelik’s great-granddaughter, Wayzaro Menen, in 1911, and his charisma made him regent during the reign of Empress Zewditu (1916-1930).

At just 24 years old, he set out to end the feudal regime in force for 700 years in Ethiopia, a country where confrontations between rival factions and palace plots were frequent.

Tafari Makonnen had to face several of them, led by princes annoyed by his influence and even by the empress herself, suspicious of his power and popularity among the people.

Journalists and politicians from all over the world were fascinated by the colorful ruler and his entourage on his continuous trips abroad.

His power and fame were increasing and in 1930, after the death of Zewditu, he was proclaimed Emperor of Ethiopia, for which he adopted the name of Haile Selassie, “The Power of the Trinity.”

The celebration lasted several days and cost three million dollars . Only in the banquet destined to entertain the national and foreign dignitaries the meat of 5,000 cattle slaughtered for the occasion was served.

The new emperor promoted laws limiting the power of the feudal nobility and promulgated Ethiopia’s first constitution : the country would become a parliamentary democracy … when he was ready for it. Thus, paradoxically, the emperor would be the guarantor of that democracy, exercising a totally centralized power.

Outside of Ethiopia, Selassie’s skills as public relations paid off during the 1930s. The emperor was seen as a liberator especially among the black community in countries like the United States, who adopted him as a benchmark.

In Jamaica they went even further: they saw in Haile Selassie the second advent of Jesus Christ, which would make possible the return to Africa of the entire black population of the planet to regain control of the continent that had been taken from them by the whites.

In 1936 he fled to London after the invasion of his country by Mussolini’s Italy. From there, he capitalized on the resistance against the fascist and colonial power, increasing his fame.

Time magazine dedicated its cover to him, naming him “Man of the Year.” In 1941, at the height of World War II, he got the support of the United Kingdom to dislodge the Italian army and regain his empire. The population received him as a true liberator.

All for the town but without the town

This second stage on the throne began as the first, with the emperor trying to modernize his country against the resistance of the powerful Ethiopian nobility, who were unwilling to part with their privileges.

The United States and the United Kingdom provided development grants to Ethiopia that helped establish structures such as a central bank, a new currency, or a national airline.

In 1955 he promulgated a new constitution that introduced a parliament elected by public suffrage, although he did not contemplate the existence of political parties.

Abroad his good press did not stop growing: he abolished slavery within his empire, joined the UN, of which he was a founding member, and became, together with Egyptian leader Gamal Abdel Nasser, the champion of decolonization.

He was received by heads of state from around the world and the royal houses visited Ethiopia on diplomatic trips of the highest level.

Although Haile Selassie presented himself as a reformer who wanted to renew his country, his rule was the expression of the emperor’s personal authority.

The example of good government and modernity on the international scene became an authoritarian regime within Ethiopian borders.

Among the highest ranking officials were the Pen Minister, charged with turning the emperor’s ambiguous recommendations into directives and laws; and the Minister of Police, responsible for applying the repression that the sovereign needed to control his country.

Like the harsh repression of the peaceful protest of the Muslim population of Harare in 1948, which claimed the autonomy promised by Menelik II.

In spite of everything, Selassie never stopped having wide support among the population.

The Addis Ababa court was a nest of conspiracies among the cliques that competed to win the favor of the emperor, who established a method of rewards and punishments to favor that rivalry and keep him away from the danger of a conspiracy.

Kapuściński depicts the emperor spending much of the morning listening to the various court denunciations and deciding the appointments and demotions of officials at will.

The only merit guiding these appointments was loyalty to the emperor.

“In the palace, the magnitude of power was not determined according to the hierarchy of positions but by the degree of access to the Most Honorable Lord”, or rather, the frequency of access “to the imperial ear”, to which a political measure whispered or denouncing a plot by an opposing faction, as described by the Polish reporter.

Another picturesque position was that of the footman of the third door, who opened the door to the emperor at the right moment so that he did not have to stop, but without appearing to invite him out of the room.

Or the official who marked the time to change tasks, nicknamed the cuckoo because he attracted the sovereign’s attention through ostentatious and repeated bows.

Little by little, discontent over the lack of economic progress and the slow pace of political reforms was permeating the population. In 1960, taking advantage of the emperor’s absence, on an official trip to Brazil, several generals of the imperial guard carried out a coup.

The plot was crushed and its leaders severely repressed, but the King of Kings never regained his mystical aura.

In 1974, a drought left several thousand dead in the country and despite Selassie’s efforts to present his umpteenth reform, a group of soldiers known as Derg turned the majority of the population against him, supporting a revolution and a military coup. that, this time, they would be successful.

On September 12, the military entered the imperial palace and arrested an octogenarian Lion of Judah, declared him incapable of governing, and established a military republic.

Some of those who had enjoyed the favors of the emperor were shot. Others fled abroad or, like the emperor, were imprisoned in the dungeons of that same palace.

Haile Selassie died on August 27, 1975, less than a year after being deposed. In principle due to an obstruction in the circulatory system due to a thrombosis, but the suspicions that he was murdered have never been dispelled.

He was buried next to the latrines in the basement where he was held. In 1992, five years after the fall of the military regime, his remains were transferred to the church of Ba’ata Mariam Geda.

Only in the year 2000 would the will of His Most Sublime Majesty be fulfilled to rest in the Trinity Cathedral with his wife, Empress Menen, who died in 1962.

According to the chronicles of the time, among the few thousand nostalgic who gathered in this last funeral procession were some Rastafarians, led by Rita Marley, who accompanied their messiah on his by now last trip.

In strange images: Halloween costumes of the 20th century