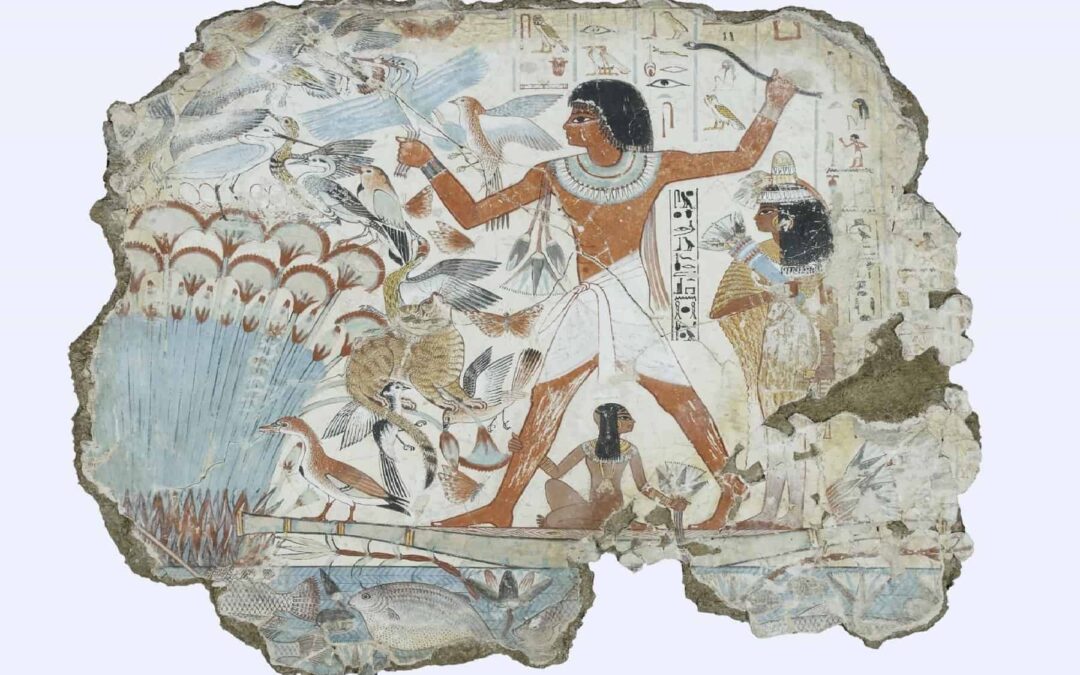 The Ancient Egyptians held animals in the highest regard. Both pets and wild animals were incredibly important to Egyptian society, from mummified cats to chariot-pulling stallions.

There are various symbols that define Ancient Egypt’s spectacular place in history.

The civilization is remembered for the pyramids, the Sphinx, hieroglyphics, pharaohs and distinct afterlife beliefs.

Another enduring element of Ancient Egypt is the role that sacred animals played. Ranging from household pets to sacred figures, animals, both domesticated and wild, played a major part in the civilization’s evolution from small settlements on the banks of the Nile, into a sprawling kingdom.

Like today, cats and dogs were popular residents of Ancient Egyptian households.

Many families had dogs as pets, but they also accompanied groups on hunts as well as being trained as guard dogs.

It is thought that Egyptian hounds were ancestors of today’s basenjis, greyhounds and mastiffs, and ancient inscriptions and hieroglyphics have included dog names like ‘Brave One’ and ‘Reliable’. Cats meanwhile, were slightly different. The Ancient Egyptians believed that felines watched over the home and were seen as spiritual guardians rather than pets.

They were very helpful to the Ancient Egyptians, as they preyed on mice and birds and, along with ferrets, were used to keep granaries and storehouses free of vermin.

It was illegal to export cats out of the kingdom and there was even a branch of government created solely to stop any underground moggy smuggling.

Killing a cat was a crime and anyone found to have done so was severely punished in front of a public audience.

The death of a cat was mourned in the same way as a human and the family of the deceased feline’s owner would all shave their eyebrows as a mark of respect.

Dog owners went one step further and mourned a loss by shaving their whole body.

Cats were by no means the only sacred animal. Scarab beetles were considered to be just as revered, as were some birds of prey like falcons and hawks.

Even some species of fish were seen as sacred and several kinds weren’t eaten by the pharaoh and the nobility for religious reasons.

Carp and catfish were eaten in high quantities but this was primarily by the lower classes.

As well as having a spiritual purpose, animals were domesticated to make daily life easier, especially in industry.

The Ancient Egyptians were an agricultural civilization and irrigation was used extensively and effectively using the water from the Nile.

Donkeys were kept on farms as work animals to pull ploughs and stamp down seeds.

Cattle were reared for their meat and milk and were a major part of the economy, with taxes put upon both their ownership and their trade.

Farm animals like goats, sheep, pigs, and ducks were also eaten and used for fat, leather and wool but the chicken was not reared until the time of the New Kingdom.

Some households kept monkeys as pets and they were trained to retrieve or steal things for their owners.

Early Egyptian farmers even tried to domesticate hyenas, but this idea was short-lived as it soon became clear that these wild beasts could not be tamed in the same way as dogs.

The use of animals varied between regions. For instance, bee keeping was more popular in Lower Egypt and the insect soon became a symbol of this part of the kingdom.

Honey was a widespread commodity and was used for food as well as makeup and medicine. Bee’s wax was used to help mummification and was a very sought after resource.

When an animal was killed, the Egyptians ensured that almost nothing was wasted with meat, milk, skin, fat, horns and even the dung all having a purpose.

North Africa was home to many wild animals as well as the ones domesticated by the Egyptians.

Jackals and snakes such as the asp were popular symbols of Ancient Egypt while antelope and gazelles were hunted for their meat.

Dangerous animals such as lions, crocodiles and hippos occasionally came into contact with humans and the Nile was home to flourishing shoreline wildlife such as birds, amphibians and insects.

The Nile was vital to the Egyptian way of life and deadly crocodiles and aggressive hippos posed a major threat to traversing the waterway. Because of this, they were both respected highly.

For pharaohs, lions and bulls represented their power.

Images of a bull viciously trampling over others, or a lion successfully hunting its prey would symbolize the strength of the ruler and of the kingdom that they ruled.

A further use for animals was in warfare. At its peak, the Ancient Egyptian war machine was dominated by chariot-based combat.

Powered by one or more horses brought in from conquered settlements, soldiers would wield bows, swords and spears from atop a chariot to cut down and trample enemy infantry.

Chariots were one of the most powerful units on the battlefield before the advent of cavalry.

Horses weren’t initially native to North Africa and only arrived in Egypt after its borders expanded under the New Kingdom.

Unlike later Ancient Greek and Roman warfare, horses were very rarely ridden and only the wealthy could afford a trusty steed of their own.

Donkeys and mules were used more prominently to transport equipment and supplies both in war and at peace when working the land.

Animals played a major part in death traditions and like people, were often mummified. The Ancient Egyptians believed in an afterlife and anyone that died wanted their possessions taken with them.

This included pets and animals they owned so animals as large as cattle were sacrificed, mummified and put into the tomb.

In the afterlife, they would once again accompany their former owner.

There were even different temples and cemeteries for all of the different animals that didn’t make it into their owner’s list of wanted possessions to take to the afterlife.

Animals weren’t just killed to escort their owner to the afterlife; they could also be their food on the journey to Duat, the realm of the dead.

This was usually fish or fowl and both were mummified carefully so they would be preserved correctly.

It was also believed that wild animals like crocodiles and hippos would be as much of a danger in the passage to the afterlife as they were during life.

Sacrifices were so common that during every year of Ramses III’s 31 year reign, 16,000 cattle and 22,000 geese were sacrificed. Many animals were sacrificed to their corresponding gods.

For instance, dogs were given as an offering to the jackal-headed Anubis, but cats were an exception and were never killed for the benefit of the gods.

Over 8 million dog skeletons and 500,000 mummified ibises have been found by archaeologists in the catacombs of the Saqqara burial site.

Many Egyptian gods were believed to be in the image of animals native to Egypt and acted as their representatives in daily life.

Bast had a cat’s head and Sobek had a crocodile’s head for example.

Geese, who were one of the symbols of the god of the Earth, Geb, were given free run of the house and garden to ensure that the god was happy.

The importance of animals to the Ancient Egyptians can still be seen in hieroglyphics and statues.

It’s still disputed whether animals and pets were worshiped as deities, but what is certain is that pets were beloved by the Egyptians and animals played a huge role in society.

Gods in the sky

The Ancient Egyptians were fond of birds of prey, as they lived between both heaven and earth

Falcons and hawks were the spiritual guardians of the pharaohs.

Hieroglyphs show the birds of prey spreading their wings behind rulers and they were believed to be an incarnation of Horus, the god of the sky as well as Montu and Socar, the gods of protection and strength respectively. Vultures were important birds to the Ancient Egyptians and stood for not one, but two gods.

They portrayed the ideas of royalty and protection and the gods they illustrated were Nekhbet and Mut.

Often depicted on temple ceilings, they were drawn with their wings stretched out. Now extinct in modern day Egypt, ibis were linked to Thoth, the god of knowledge. Common on the banks of the Nile, many have been found buried and mummified in ancient catacombs.

They were also associated with the gods Tehuty and Djehuty who held the power of language and had the intelligence to educate and teach men new skills. As well as birds of prey, the Ancient Egyptians admired the world’s largest land bird, the ostrich.

The bird was seen as the embodiment of order and was lined to the goddess Ma’at, who had an ostrich feather attached to her headdress.

This garment was very popular with Egyptian women as a result. Fragment of a polychrome tomb-painting representing Nebamun, standing in a small boat, fowling and fishing in the marshes, his wife stands behind and his daughter sits beneath, he holds a throw-stick in one hand and three decoy herons in the other, his cat is shown catching three of the numerous birds which have been startled from the papyrus-thicket, fish are shown beneath the water-line, lotus flowers with large and broad leaves grow in marsh to the right of the boat, bunch of lotuses hangs over his arm and another spray is held by his wife, the heads of the flowers are approximately triangular in shape, shown in profile with white petals framed by green and grey sepals, buds alternate regularly with open flowers, eight vertical registers of hieroglyphs remain.

Life of pharaohs in ancient Egypt

What did ancient Egypt accomplish?