Home / When Was the First Egyptian Pyramid Built? 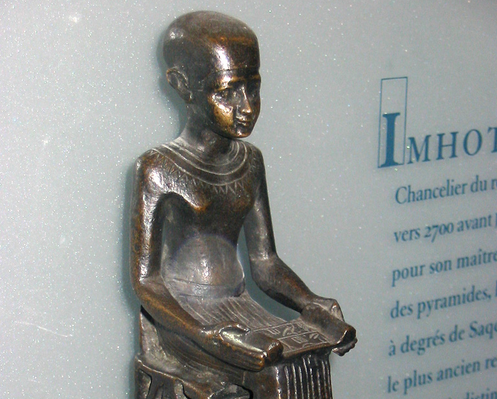 About 4,700 years ago Pharaoh Djoser, sometimes spelled Zoser was the first pharaoh who built a pyramid in ancient Egypt.

First pyramid of Djoser was built during the third dynasty around 2630 BC–2611 BC, at Saqqara, northwest of Memphis.

Most pyramids were built as tombs to the pharaohs and their royal families.

First pyramid of Egypt was built for religious purposes. It was not simply a grave. It should help pharaoh to be eternally reborn in afterlife.

Architect who built the first pyramid

Imhotep was one of the chancellors of the Pharaoh Djoser and the high priest of the sun god Ra. He was the architect who designs the Pyramid of Djoser.

No one can be sure about the early life of Imhotep because there is no text from his lifetime mentions anything about his achievements.

After ten centuries following his death the world has began to know his abilities in Architecture and engineering. Imhotep was also magician, poet and judge.

The Step Pyramid of Djoser, Saqqara

The Step Pyramid of Djoser, in Saqqara

The Step Pyramid of Djoser, at Saqqara, is the oldest pyramid in Egypt. It was built during the third dynasty (2,649-2,575 BC), for Pharaoh Djoser by his architect Imhotep.

The Pyramid of Djoser was a revolutionary design. Previously, the pharaohs were buried in rectangular mastabas. Imhotep created a pyramid by stacking up to six mastabas.

This design would later evolve into smooth-sided pyramids, such as those that can be seen in Giza or other places in Egypt.

This site enjoyed great attraction in ancient times, as evidenced by ancient graffiti from which it can be deduced that tourists and pilgrims had already visited this place since the Middle Kingdom (2040-1640 BC).

What can be seen in the stepped pyramid of Djoser?

When completed and covered in limestone, the Step Pyramid reached a height of 62 meters and its base had dimensions of 140 × 118 meters.

The original entrance was on the north side, but it was blocked and visitors must now enter through a recently opened tunnel on the south side.

Wooden corridors and stairs lead down to a depth of 28 meters underground, where the pharaoh’s burial chamber is located, which was looted in ancient times.

The Step Pyramid is surrounded by a large funerary complex that has been partially rebuilt. Among the buildings flanking the pyramid you can find a hypostyle hall and the ‘Great South Court’.

On one of its walls you can see a frieze of cobras. The cobra, worshiped as a goddess in this region, was the symbol of royalty.

On the north face of the pyramid are the remains of a small wooden room called “Serdab”.

A wall leaning against the pyramid is pierced by two large holes that allow the view of the statue of Djoser ( a replica, the original is in the Egyptian Museum in Cairo ). The ancient Egyptians made offerings to the deified pharaoh through these holes.