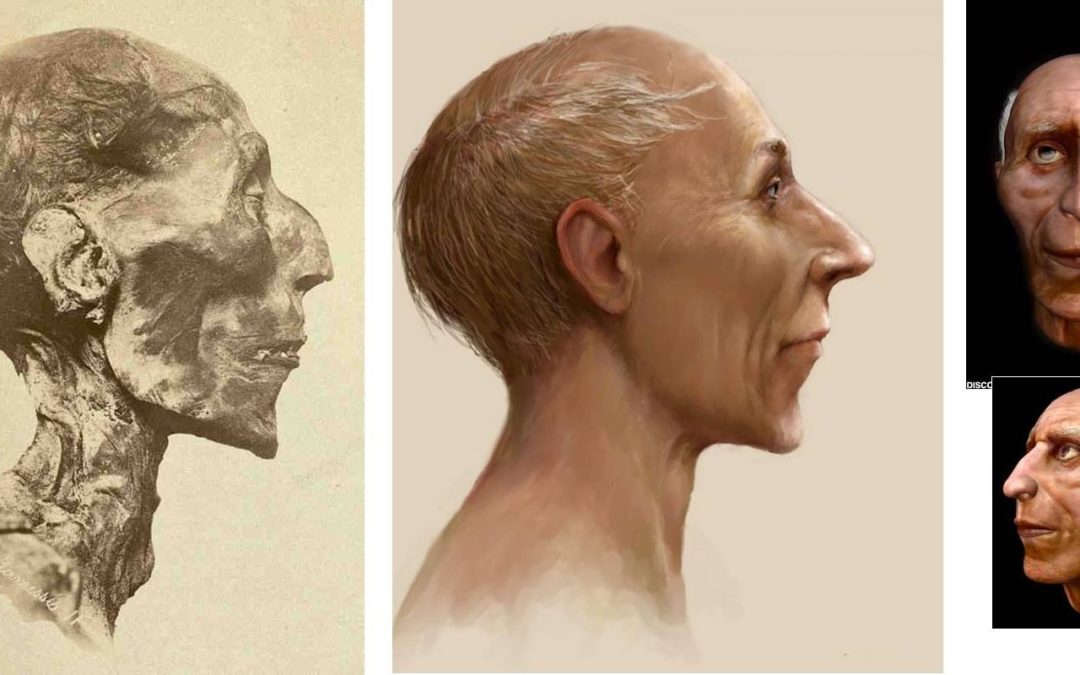 Ramesses the Great also known as Ramses II, was the third pharaoh of the Nineteenth Dynasty of ancient Egypt, who ruled about 66 years, from 1279 BC until 1213 BC.

He is one of the most famous pharaohs, due to the large number of vestiges that last from his active reign.

His name meaning is the “Keeper of Harmony and Balance, Strong in Right, Elect of Ra”.

Ramses II was the son of Pharaoh Seti I and his Great Royal Wife, Tuya.

He was not, as is sometimes assumed, an only child; It is known that he had at least two sisters and, apparently, a brother named Nebchasetnebet, who died before reaching adulthood, so Ramses II automatically became the heir of Seti I.

Since he was a child he lived military activity, as a member of a military family.

Seti I appointed Ramses co-regent when he was about fourteen years old, and received intensive training from the same pharaoh and from multiple masters of Arts and sciences.

The co-regency lasted between three and seven years, there are no reliable sources on this subject.

At the age of fifteen or sixteen, Ramses II already had authority over part of the army; inscriptions from that time describe him as a “cunning young leader.” At that time he was already married and was the father of four children.

During the period of co-regency, there were few military problems and Ramses II carried out civilian tasks as his father’s delegate, such as supervising the construction of the temples and the extraction of construction material in the quarries of the southern empire.

Ramesses II as a child

What was Ramesses II greatest achievement?

During his reign as pharaoh, among one of his greatest achievements, Ramses II led the Egyptian army against several enemies including the Hittites, Syrians, Libyans, and Nubians.

He expanded the Egyptian empire and secured the borders of Egypt against attackers. It is known that one of the most famous battles during Ramses’ rule was the Battle of Kadesh.

Ramesses II is known for his extensive building programs and for a lot of colossal statues of him found all over Egypt.

Among one of Ramesses II construction projects, there have been many large monuments, including the archeological complex of Abu Simbel, and the Mortuary temple known as the Ramesseum.

He even built on a monumental scale to ensure himself that his legacy will remain in accordance with time.

“Ramesses II also erected more colossal statues of himself than any other pharaoh”.

01 Ramesses II on the march

Ramesses II led a massive Egyptian force, but Hittite spies tricked him into thinking the Hittite chariots were hundreds of kilometers away.

Muwatalli and a battalion of 2,500 Hittite chariots were waiting in the forests on the other side of Kadesh.

The Egyptian divisions were miles from camp when they were broadsided by a charge of Hittite charioteers. The Egyptians fled with the Hittites hot on their heels.

The Hittite chariots crashed through the half-prepared defenses of Ramesses’ camp and charged toward the royal tents.

According to Ramesses’ account, he was able to fight off the Hittite hordes single-handedly. Others credit his elite corps of bodyguards.

Egyptian military strategists had foreseen the threat of an ambush and shipped a chariot division to Kadesh by sea.

The reinforcements send Muwatalli’s forces retreating across the Odontes River.

The next day, the forces faced off for the battle that would decide supremacy.

But both sides had sustained so many casualties the day before that neither had anything left and, after fruitless bloodshed, a ceasefire was called.

The eternal treaty or the silver treaty is considered to be The Egyptian–Hittite peace treaty and is the only ancient African treaty for which both sides’ versions have survived. This treaty occurred in 1259 B.C.

The reason why it is known with the name silver treaty is because it was written on silver tablets and later translated from those tablets for further research and study.

These silver tablets were discovered in 1828 (Egyptian) and 1906 (Hittite). Its current location is at Istanbul Archaeology Museums and Precinct of Amun-Re in Karnak.

At 1259 B.C. Ramses II, along with Emperor Hattusilis III have concluded one of the oldest peace treaties in the history of this world.

The peace treaty ended the Egyptian Hittite war that lasted more than 80 years and is considered one of the prime examples in diplomatic history.

There was a treaty that was signed between the Hittie Empire and the Egyptians, to end up warship as both of them had several wars between each other for centuries in order to rule over the kingdom.

Since the Egyptian-Hittite is also known as treaty of Kadesh, it actually relates to the battle of Kadesh resulted in both sides with caused both of the sides to suffer a lot however, neither of the sides were able to prevail decisively in either the battle or the war.

This conflict remained in both of the sides for about fifteen years before the treaty was signed.

Even if the treaty was signed after the battle, it is still known to be as “Treaty of Kadesh” just because of that peace to occur between the two sides and war to stop however, it is stated that the treaty itself did not bring peace along with it, in fact it brought “an atmosphere of enmity between Hatti and Egypt that lasted many years,” until the eventual treaty of alliance was signed.

How many children did Ramesses II have?

A pharaoh is expected to provide suitable heirs to the throne, and Ramesses the Great approached this royal task with particular gusto.

During the first ten years of his father Seti I’s reign as pharaoh, a teenage Ramesses sired ten sons and at least as many daughters.

Over the course of his long lifetime, Ramesses had six to eight principal wives, dozens of lesser wives and untold numbers of concubines.

He is believed to have fathered an estimated 80 sons and 60 daughters, an impressive and somewhat excessive number, even by pharaoh standards.

Ramesses had good reason for spreading his seed. Although he was born into a common family, Ramesses was intent on reinstating a pure dynastic bloodline.

He gave his male heirs high-ranking administrative posts and trained each of his first 12 sons as possible successors, but none of them managed to outlive Ramesses.

The thirteenth son, Merenptah, assumed the throne around 1214 BCE, but despite Ramesses’ best efforts, the Ramessid Dynasty withered away in only 150 years.

In 1974, the Mummy of Pharaoh Ramesses II was Issued an Egyptian Passport so that he could be delivered to France, Paris and the only reason is because according to France Law, anyone who enters to France whether if he/she is dead or alive, it must carry itself a passport so the Egyptian government issued a passport to King Ramesses II, labeling him as “King (deceased)”.

What did Ramses II the Great build?

These two temples along the banks of the Nile are outsized paeans to Ramesses and Nefertari.

Both temples are carved into a sheer rock face. The smaller features two 12m (40ft) statues of Nefertari flanked by four even larger colossi of Ramesses.

Deep inside the larger temple – which places Ramesses II on equal footing with the gods – a ray of sunlight pierces twice a year: once on Ramesses’ birthday.

Per-Ramesses
(Or Piramesse)
1280 BCE
Ramesses II built this sprawling complex along the northeastern Nile Delta as the royal seat of the Ramessid Dynasty.

The site originally held a modest summer palace constructed by Ramesses’ father, Seti I, but the great pharaoh gave it the supersize treatment, adding more than 10km2 (4mi2) of mansions, social halls, military barracks and an enormous, opulently tiled throne room, which was fittingly dedicated to the great pharaoh, Ramesses himself.

Nearly every wall of the 285km2 (11mi2) temple complex is scrawled with eulogies to his military victories, particularly the exaggerated depiction of his routing of the Hittites.

In antiquity, dozens of imposing statues of Ramesses adorned each pillar. Today, the largest stone colossus lies broken on the ground.

It is the inspiration for the English romantic poet Percy Bysshe Shelley’s famous poem, Ozymandias.

Great Hall
1290-1224 BCE
Ramesses II completed the Great Hypostyle Hall at the Temple at Karnak during his reign, with decorations celebrating his power, much like everything else he had built.

Later pharaohs would add their own decorations. The Great Hall is considered one of the greatest feats of building ever achieved in the ancient world.

The women of Ramses II

Perhaps because he is the best known of the pharaohs, there are data on dozens of queens, wives and concubines and hundreds of sons and daughters of this king.

It is also true that the king did nothing to hide this fact, but even went so far as to compile a list with the names of all his children and to design a huge tomb in the Valley of the Kings for several of them. This tomb is known as KV5.

Without fear of being mistaken, the woman in the life of Pharaoh was undoubtedly his first “Great Royal Wife”, the beautiful Nefertari “by whom the Sun shines.”

Her lineage is unknown, although it is thought that perhaps she was related to the previous dynasty by Pharaoh Ay.

Nefertari was not only a wife and mother to Pharaoh’s children, but she took a very active role in talks with the Hittites, and her letters to Empress Puduḫepa laid the foundation for the peace process.

Nefertari, also known with the name Nefertari Meritmut, was an Egyptian queen and the first of the Great Royal Wives of Ramesses II. Nefertari in English means “Beautiful Companion”.

She is considered to be one of the best known Egyptian queens, next to Cleopatra, Nefertiti, and Hatshepsut.

Egyptian Queen Nefertari is also known as “Lady of The Two Lands” or “Mistress of Upper and Lower Egypt”. Although her proper date of birth is unknown, she was borne in the 19th Dynasty of Egypt.

During those times, she was highly educated and had a skill that was quite rare at those times about reading and writing hieroglyphs.

Ramesses II (her husband) also constructed a temple for her at Abu Simbel next to his colossal monument there. Nefertari got married to Ramesses II even before he was ascended the throne.

Nefertari had at least four sons and two daughters respectively.  Meritamen and Henuttawy are her two royal daughters and her four sons are Amun-her-khepeshef (Her eldest son) Pareherwenemef, Meryatum and Meryre respectively.

In several reliefs she is shown wearing the crown of an Egyptian pharaoh or smiting the kingdom enemies in battle.

According to the researchers, Nefertari statues has always been seen placed beside King Ramses II statues, maybe perhaps because she was his main royal queen, and the closest one to his heart.

According to Hawas, Nefertari was known for her well-chosen fashionable dresses, beautiful clothes, artistic accessories, and make up.

Beside her beautiful physical appearance, it is said that she still captivates the minds of fashion designers around the world.

She died in 1255 B.C. She is considered to be one of the most celebrated personalities in Egypt.

Facts You May Not Have Known About Queen Nefertiti The Great Royal Wife
Pharaoh Khufu, The Great Pyramid Builder