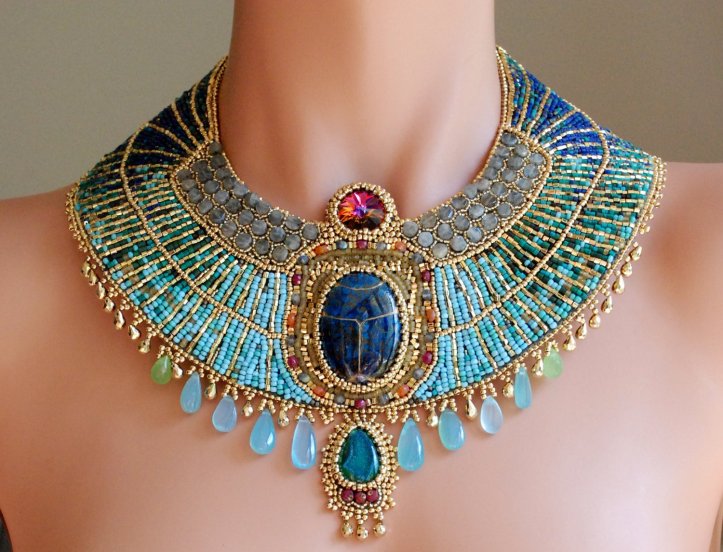 The history of ancient Egyptian jewelry with Vitreous composition inlay dates back to the beginnings of the dynastic era.

Jewelry has existed in different materials, forms and uses. However, although jewelry was created to be used in life, the ancient Egyptians used it in death by placing it on the mummies as part of the funeral rite.

According to their beliefs, the jewels and amulets had to be made with certain materials which gave the piece certain magical powers that helped the deceased to recover life in the hereafter and reach eternity. Earrings, from the tomb of the pharaoh Tutankhamun, discoverd in the Valley of the Kings,

Among the different types of jewelry that were worked with some vitreous composition we have in greater quantity; the necklaces and the pectorals, counting also with numerous examples of bracelets, anklets, rings and earrings.

In relation to its function and meaning within the funeral ceremony, the jewels more than ornaments were pieces that possessed magical powers. Gold Necklace of King Psusennes I, from his tomb in Tanis, Nile Delta, Northern Egypt.

In chapter XXVII of the book of the dead is a magical spell for a golden vulture that should be placed on the deceased’s body, in the vignette they give precise instructions on how to elaborate it, even it is minutely indicated as it should be manufactured, detailing the shape and material. The great treasure of Tutankhamun has been a very important evidence for the study of ancient Egyptian jewelry with vitreous incrustations, besides that it has served to verify how the instructions that are indicated in the Book of the Dead were fulfilled.

Necklace with Lunar Pectoral – from the tomb of the pharaoh Tutankhamun

In the mummy of Tutankhamun an extraordinary breastplate was found as indicated in chapter XXVII of the Book of the Dead, made in gold with glass incrustations.

Most of the jewels had to be made in gold because it was the material most related to the gods, which should be combined with different semi-precious colored stones, which, thanks to their mineral origin, provided magical powers.

Pectoral and Necklace of Princess Sit-hathor-yunet 1887–1878 B.C.- The Metropolitan Museum

Given the difficulty involved in obtaining semi-precious stones, the art of embedded stone will be imitated perfectly with the different vitreous compositions, ideal material for having the same physical qualities as it is also of mineral origin.

Cairo Museum, Egypt. The jewelers were called neshedi nubi, the man of gold, and hemu nub, the gold craftsman. Several tombs of artisans have been located. Pin, Horus Falcon from the Tomb of Tutankhamun

We can still find positions of greater importance than that of the artisans mentioned above, which was responsible for the organization of the entire industry, which even never touched the blower pipe, in the different titles we can find the following: Inspector of the treasury of gold and silver, inspector of the gold-colored land of Amun. His main responsibility was to give precise instructions on the materials that were going to be necessary for the manufacture of the treasures as well as to follow up each one of the phases of elaboration of the piece.

Although the organization of the industry of the work of gold did not allow them personal signature, the name of Neferronpet is retained, who signed in his book of the dead.

Due to the precision that the work required, before starting the elaboration of the piece it was necessary to prepare a design in a template with the model of what was going to be manufactured. The Ancient Egyptian Pectoral of Prince Khaemweset, son of Ramese

Among the most important thing that had to be planned from the beginning, was to detail very well the thickness and distance of the ribs where the fragments were already embedded polished material.

Each piece had a specific place within the design; you could never place one piece in the place of another, which made even more difficult the work for the craftsman.

The supports are mostly gold, which was worked in different techniques as necessary; laminate, cast in open mold. When larger pieces were made like masks or sarcophagi, it was necessary to work in several parts and then join them with welding.

Once the support was finished, the fragments of the vitreous composition were cut and polished according to the size of the hole to finally be embedded in its place.