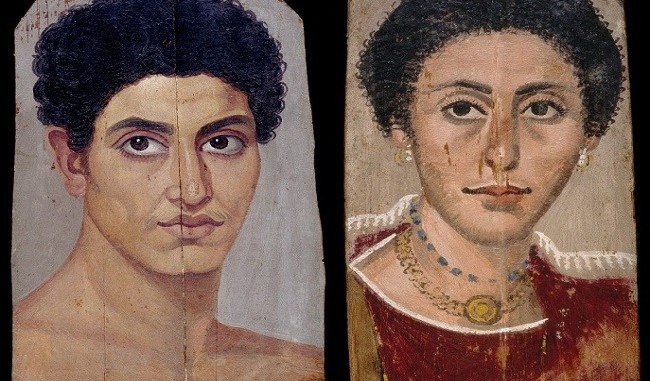 They are known as the “Fayum mummy portraits” to the set of two thousand individualized portraits found mostly in the upper outer part of the mummies of the oasis necropolis of the same name, El-Fayum, although they are also found in other places such as Saqqara, Akhmim.

This is an example of funerary art that was developed in ancient Egypt mostly between the first century and the fourth century, in the context of the Roman occupation of the Egyptian territory.

These works of art were made by highly skilled artisans, based on the use of a very hot mixture of beeswax and vegetable and mineral pigments.

This procedure allowed highlighting textures and volumes through color, creating a multitude of nuances that enhanced the brightness and intensity of the look. One of El Fayum’s portraits of the Roman period

Beyond their exceptional naturalism and realism, the most outstanding aspect of El Fayum’s portraits is that they represent the largest and best preserved set of portraits made of fragile materials, in this case wood, of all Antiquity.

Among the many factors that can be pointed out as the cause of this good conservation, the climate is undoubtedly one of the most important.

The extremely dry environment and the wax used helped these works of art have come to the present while maintaining most of their original colors and brightness.

The multicultural nature of this society was reflected in a great cultural syncretism, as reflected by the funerary world.

The best proof of this is represented, for example, by mummy shrouds in which the deceased is dressed in Roman fashion, and accompanied by the Egyptian gods Anubis and Osiris.

Although Greco-Roman culture had funerary rites that prioritized the incineration of the body, as opposed to the preservation of it from Egyptian rituals, both worlds were mixed, so that many Greeks and Romans of El Fayum decided to adopt the Egyptian mummification. One of El Fayum’s portraits of the Roman period, of a woman with jewelry

From the Middle Kingdom (2055 – 1650 BC, approx.), In the Egyptian funerary world there was a custom of wrapping the deceased’s head with a funerary mask made of cardboard, a material consisting of layers of linen or papyrus hardened with plaster and often decorated with paint or golden elements.

In these masks the deceased was ideally portrayed, without individualized physical features or defined age.

Already in the Greco-Roman Period, the funeral masks had varied shapes and sizes.

On the one hand, the innovation was represented by those of plaster or stuccoed fabric, which showed in a realistic way the torso and the head of the deceased, dressed in their jewels and dresses.

On the other hand, we can talk about the traditional Egyptian-style, with a wig and the typical protective ushabti necklace, decorated with scenes to protect the deceased on his trip to the underworld.

However, from the first century BC, some portraits placed on the head of the different mummies began to appear: painted in a totally realistic way, showing the person just as he was at the moment he died, or in the peak moment of his life.

The most direct antecedent for these portraits of mummies is found in the Roman tradition of busts or funeral masks, made with great realism so that his family will always remember his absence and extol his virtues and exploits. Fayum mummy portraits have other very notable characteristics that make them unique in their genre.

The general belief is that these works were performed in the life of their protagonists, so it is likely that they were exhibited inside their homes while they were still alive.

Likewise, it is believed that, before being joined to the mummy of the deceased, they were used as procession elements during convenient funeral rituals.

Another very interesting feature to consider is the age of the people portrayed, especially highlighting the high percentage of children, reflecting the high infant mortality of the time.

For the most part, these children appear with their immature physical appearance, and with a golden ring or torque around the neck to protect them from the evil eye.

In the case of teenagers, we almost always find them with a discreet hair on the upper lip, following the classic iconographic tradition.

Be that as it may, beyond any iconographic distinction, all the portraits of El Fayum have the same function: to address not the living, but the dead, and guide their protagonists in the transit to the Hereafter in a romanized world, totally different from what Egypt had known in its previous 3000 years of Native history. One of El Fayum’s portraits of the Roman period, of a young Roman fashion