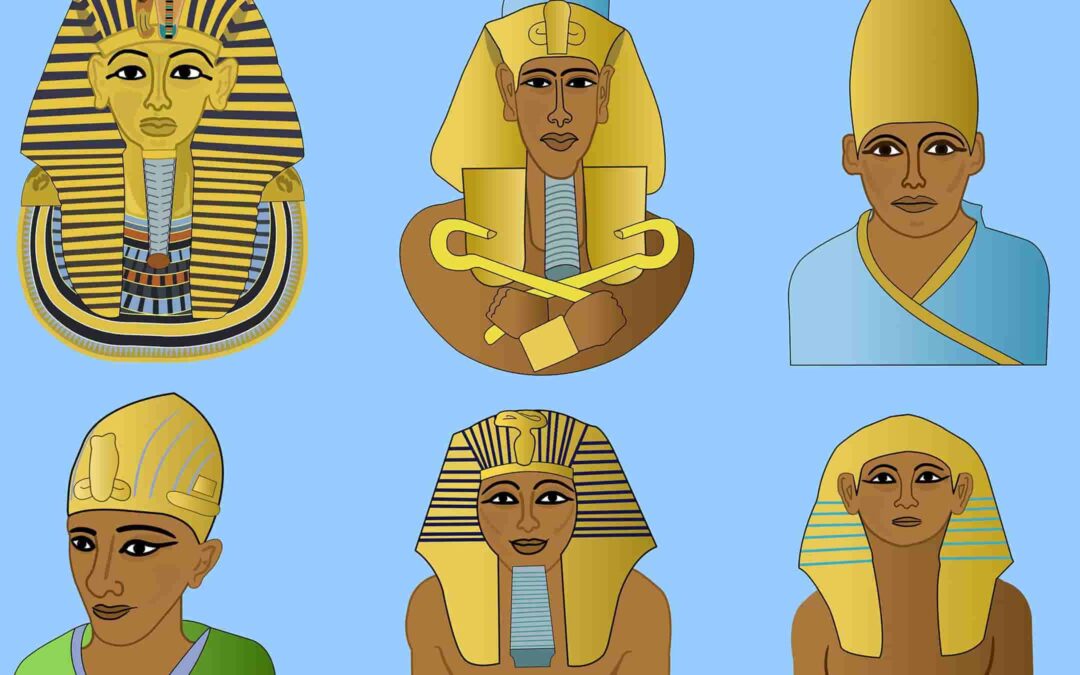 The Egyptian crown was one of the most distinctive symbols of the pharaohs and gods of Ancient Egypt.

The Pschent is the Hellenized name of the double crown, sekhemti, carried by the pharaohs since the dawn of dynastic times and meant that they possessed power in the Two Lands (Egypt).

It was formed by the superposition of two different crowns:

They were used as symbols of power by the pharaohs of Ancient Egypt throughout three millennia, throughout their history; also to distinguish the different divinities of this civilization.

The ornamental complexity evolved over time. Based in the two regions, Upper Egypt (south) and Lower Egypt (Nile delta), they can be admired in countless pharaonic sculptures and paintings from all ages.

From these works it is possible to distinguish the regions from which the nobility came. During the predynastic era, the country was divided into the two regions already mentioned, and they were brought together by Pharaoh Narmer, under his command, thus beginning the dynastic era. Each region was identified with a crown and had a particular god.

It represented Upper Egypt, and was called Hedjet; It had a truncated-conical structure, with a rounded upper end.

The material that constituted it is not known but it is possible that it was of plant origin, therefore, it would be greenish in color, although in Egyptian iconography it is represented with the white color, that of Upper Egypt. Related to the vulture goddess Nekhbet.

It represented Lower Egypt, and was called Deshret, Mehes (the one from the north), or Net (similar to the goddess Neith), among other names.

It was made of the same material as the White crown, probably, as shown in the pyramid texts. Its representative color is red and it appears on the walls of the temples facing north.

Cylindrical in structure, with a curly protrusion, associated with the bee, (another symbol of the north) and with the goddess Neith. It was carried by the goddesses Wadjet, Amunet and Neith.

It represented Upper and Lower Egypt, that is, the union of both kingdoms, the unification of Egypt. In the iconography it is represented as a White crown within the Red one. It was called by the ancient Egyptians sekhemti “the two powerful”.

It is a more complex form of the White crown, to which are added two ostrich feathers, sometimes with two horns at their base, uraeus and a solar disk.

It is represented in yellow. It was thought to help the deceased to be reborn. It also appears in the texts of the pyramids. It was related to the god Osiris.

It has the style of a triple Atef, and can be considered a variant of it. It represents the triumph of the Sun over darkness and youth.

It is shaped like a blue cap; A ceremonial crown, the kings wore it in offerings to the gods, battles and ceremonies. It was made of blue cloth.

Represented by two falcon feathers, although it undergoes transformations, such as the inclusion of two horns or a solar disk.

It is related to the union of the Two Lands and of the two goddesses Wadjet ( Lower Egypt ) and Nekhbet ( Upper Egypt ). In the New Kingdom it becomes a crown worn by the women of the royal house and the Divine Adorers.

The Nemes is a cloth handkerchief worn by gods and pharaohs. One of the most famous representations of a nemes is on Tutankhamun’s funerary mask.

It covered the entire head, falling over the shoulders and was tied behind the neck. It is estimated that it was white with blue bands, or gold and lapis lazuli blue.

Senet, a board game to reach the underworld

The obsession with beauty in ancient Egypt