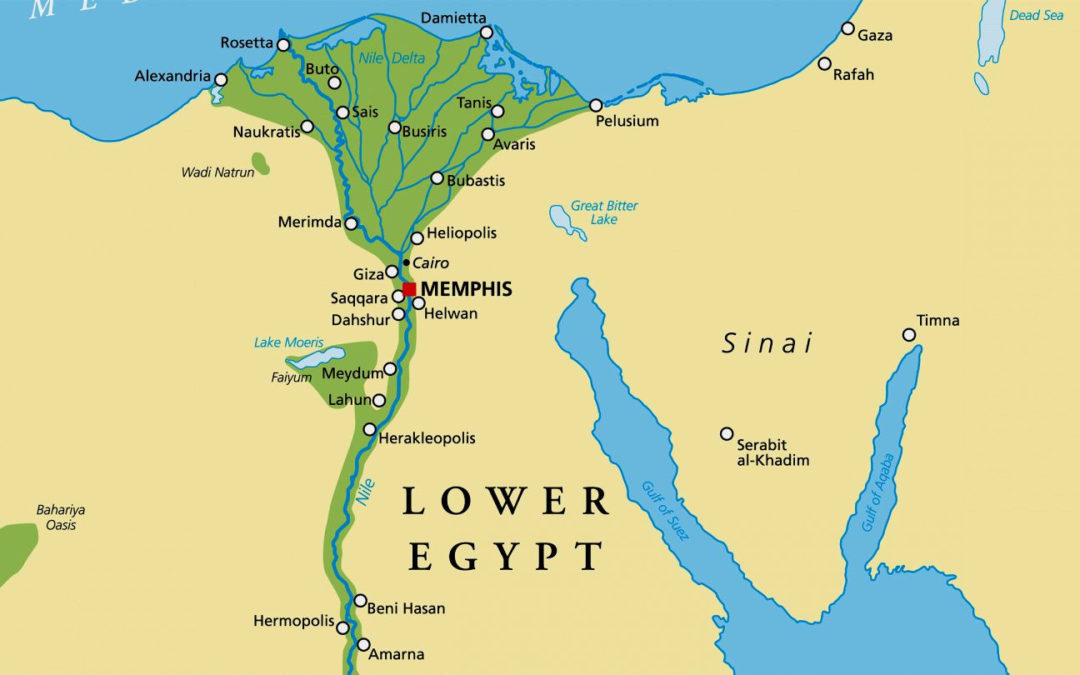 Ancient Egypt had its origin in the course of the Nile River. It reached three periods of great pharaonic splendor: the Ancient Kingdom, the Middle Kingdom and the New Kingdom.

In different periods its expansion reached the eastern desert, the coastline of the Red Sea and the Sinai Peninsula. Formerly it was divided into Upper and Lower Egypt (south and north).

This civilization developed over 3,000 years until the year 31 BC the Roman Empire conquered the Ptolemaic Egypt that ends up disappearing as a state.

The cultural identity began to be diluted after the conquests of the kings of Babylon and Macedonia. In addition, with the arrival of Christianity, ancient Egypt religion disappeared.

The fertile deposits of the Nile River had allowed the Egyptians to practice agriculture in a less laborious way, so that the ancient Egyptians could devote more time to technology, art and cultural development. The State controlled natural and human resources.

The Ancient Nile delta is approximated to be 90 KM in length and 240 KM in width along the coastline. Overtime, people have been settling around the delta for thousands of years due to its rich agricultural soil deposits.

The ancient Nile delta originally had several tributaries, The tributaries of the Nile delta spread out in a V shape and poured its waters into the Mediterranean sea through the lower part of Egypt.

This area was vastly covered by deposits of silt and was pushed outwards playing a major role in creating an Egyptian boundaries. Nile Delta tributaries were seven in number and spread out from East to West.

The lower part of Egypt was mapped by the Nile delta. Ancient Egyptians relied heavily on the Nile river for a reliable source of water for both agricultural and also for the development of commercial settlements.

Despite the floods experienced along the Nile and its lower parts, the predictability of the Nile waters enabled the Egyptians to plan the growth of crops in time.

In addition to the Nile being a major source of water, it also housed fishes and waterfowl.

Furthermore, canoes and boats were used on the Nile for transportation purposes from one end to another.

The Ancient Egyptian empire was formed during the reign of the first Egyptian King. This period was around 31oo BC and occupied the tip of the Nile delta.

It was at this period when the major capital of ancient Egypt was formed.

The ancient Egyptian empire survived relative stability despite periods of transition in leadership, the empire was invaded by foreign powers during its period of slow decline by the command of Alexander the Great.

Greek kingdom ruled Egypt for a long period of time until it was taken over by the Romans.

3.Map of ancient Egypt and Nubia.

The north of a Nubia creates the boundary of the upper part of Egypt the Nubian and Egyptians had a long term peaceful relationship mainly because they traded together in commodities such as gold and also engaged in slave trade as a restful of this interaction the people of Egypt conquered the Nubian and thus expanding their territories to the south.

The upper and lower part of Egypt were ruled by different kings up to the time of pharaoh Narmer who unified both upper and lower Egypt, Nubia served as a trade point between the Egyptians and the people of Nubia as a result of greed for trade Egyptians decided to conquer the Nubian so as to control trade boundaries.

Egyptians did this mainly because Nubia was the gateway to acquire African richness and as they were expanding their territories, they built forts and with this it lead to the Nubians being assimilated by the Egyptians.

Read more: Why do Egyptian statues have broken noses?

The ancient Egyptian government was characterized by being monarchical, absolutism and theocratic.

The government was in the hands of a person called Pharaoh, who lived surrounded by a great court of privileged nobles, officials, priests and warriors.

Pharaoh was the master of all men, owner of all lands and all waters of the Nile. His will was law.

The pharaoh was considered the son of the god Ra (Sun), who had given him power to rule men.

Therefore mortals owed him great reverence and none of them could pronounce his name without adding the following expression :> that life and health flourish in him.

Auxiliary Officials in the Government

Many government functions were delegated to people pharaoh can trust, who provided effective collaboration. Among the main officials:

The Royal Scribe, who was charged with keeping track of agricultural income and inspecting industries and commerce. For this they had to be experts in the handling of numbers and writing.

The Great Vizier, in charge of controlling the provinces, was the intermediary between the authorities and the pharaoh.

The Head of the State Seal, currently compared to the Ministry of Economy, whose function was to monitor the tax revenues and expenses of the State

The Great Priest, who was in charge of religious worship and was concerned with presenting the pharaohs as descendants of the gods.

The ancient Egyptians wrote with small pointed reeds, dipped in a kind of ink, prepared with water, rubber and plant substances.

They used as paper the papyrus stalks, which grew on the banks of the Nile River.

The Egyptian writing script was deciphered by the Frenchman Jean-François Champollion in 1822.

The key was provided by the discovery of the Rosette Stone in 1799, by the soldier Pierre-François Bouchard, when Napoleon Bonaparte made the expedition to the country of the Nile.

Hieroglyphic writing was a difficult interpretation, as it was formed by signs and images of animals and objects. It was generally used in tombs and temples.

Hieratic Writing is the same hieroglyphic writing but in abbreviated form. Its use was limited to priests and people of great culture.

Demotic Writing is simplified hieratic writing. It was used by the townspeople.