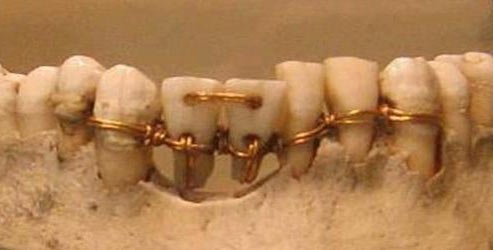 Dentistry started many years ago in ancient Egypt. It was invented so as to help in health factors but as time went by people of Egypt started medical schools that taught dentistry and Egyptians developed a positive attitude towards dentistry.

Ancient Egyptians started studying it as a profession and this contributed a lot in solving cases that were related to dental issues.

Treatment of dental diseases was done using different tools such as bone saws, hard scales, chisels and other variety of dental tools.

Other diseases included cavities and gums that were receding. Attrition, a type of dental disease was very common among the ancient Egyptians.

According to historical findings, Egypt is regarded to having started dentistry.

Ancient Egyptians had a common way of treating teeth especially the molars whereby they used strings to unite the molar teeth.

Methods that were learned during the study of dentistry were always recorded so as to ease tooth treatment whenever necessary.

What was recorded concerning teeth treatment also included how to cure wounds that were be found in the mouth.

In spite of studies on how to cure teeth, it was also still complex to carry it out mainly because teeth treatment required much caution.

During ancient Egypt, whenever one had a tooth problem, it was treated by pulling out the tooth with the problem or by drilling cavities.

Carrying out this was something painful but ancient Egyptians had already come up with prescription for injuries.

“Archaeologists have discovered mummies with crude metal bands around their teeth and believe that the bands were used, to create pressure to move around the teeth.

It was also found that lost teeth were reattached by means of silver or gold wire to the neighboring teeth. But it is not completely proven, if these procedures were performed during the life of the patient or after death.

Because Egyptians placed value on the appearance of the dead, to ensure they were sent off correctly to the afterlife.”