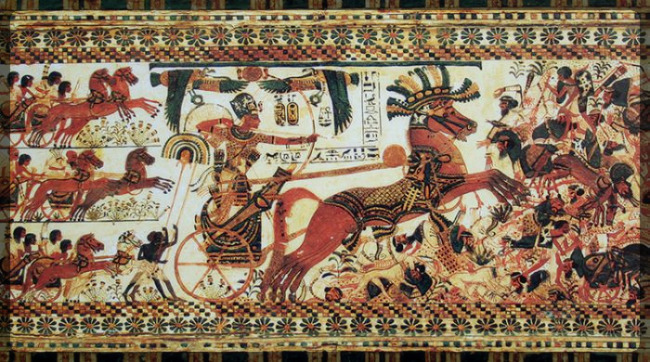 The great Nile River of Egypt, with its abundance of fresh water in the middle of the vastest desert. Ancient Egypt has always served as a beacon of life, prosperity and civilization.

The Nile Valley was the cradle of one of the oldest, and for many millennia, the most advanced civilization on Earth.

Outside the fertile Nile valley, Egypt is almost entirely a desert, so once villages settled there, it was almost impossible for them to leave.

This factor served to strengthen the power of a central state by making it easier to apply taxes, recruit armies and enforce laws.

The Nile also encouraged commerce and communication between settlements by facilitating the flow of people and goods through river transport.

Therefore, it is not surprising that Egypt would develop one of the oldest state societies in the world.

The First Unification of Egypt

Ancient Egypt was divided into two different regions: Upper Egypt and Lower Egypt. The term “High” and “Low” is derived from the Nile current from the south to the north to the Mediterranean Sea, so that Upper Egypt lies south of Lower Egypt.

The first documented unification of Upper and Lower Egypt into a single kingdom is recorded in the Narmer Palette dating to about 3100 BC.

The artifact represents King Narmer defeating his enemies and using both traditional crowns of Upper and Lower Egypt.

From this point, the pharaohs (kings) who ruled over the Nile valley during the most prosperous era of Egypt ( the Old Kingdom ,the Middle Kingdom and the New Kingdom ) were known as the rulers of the two Kingdoms, and they carried the sekhemty, a double crown, each medium representing the sovereignty of one of the kingdoms.

However, when Egypt went through darker and less prosperous times (known as the “intermediate” periods), there was a tendency towards fragmentation in two or more independent states.

The Old Kingdom: the Age of the Pyramids

The Old Kingdom was the first “golden age” of Egypt. It lasted from 2686 BC – 2181 BC and was the most prolific period of the construction of pyramids.

Most of the pyramids were built in Lower Egypt, near the capital of the Old Kingdom in Memphis. It was also the period in which ancient Egyptian art, culture, religion and society developed their unique flavor that would remain intact throughout the Old Kingdom.

To legitimize their rule, the pharaohs of Egypt promoted the idea that they were living gods.

Thus, the pharaoh was supposedly the son of the sun god Ra, and was the living incarnation of Horus (the god of heaven), and would transform into Osiris (god of the afterlife, the underworld, and rebirth) after his death.

The idea seems silly to us today, but there is overwhelming evidence that the ordinary people of Egypt believed in these ideas.

So when the foreign rulers came to conquer Egypt, if they do not proclaim themselves as Egyptian gods too, they would be hated by the local population.

The promotion of a divine ruler was a stabilizing force, and would be copied and adapted outside of Egypt, throughout history, again and again.

The Old Kingdom of Egypt came to an end during the First Intermediate Period, when once again Egypt was divided into Upper and Lower Egypt.

In Lower Egypt, dynasties 7 and 8 ruled from Memphis and were later replaced by dynasties 9 and 10 that ruled Lower Egypt from Heracleopolis (Ehnasia).

Meanwhile, Upper Egypt was ruled from the city of Thebes by the 11th dynasty.

Egypt was unified again when Pharaoh Mentuhotep II of Upper Egypt conquered Lower Egypt. This marked the beginning of a new stage of unity and prosperity known as the Middle Kingdom.

One of the most famous pharaohs of the Middle Kingdom was Senusret III, a warrior king who expanded the territory of Egypt in the south to Nubia, built a navigable canal through the first Nile waterfall, allowing ships to travel from Egypt to Nubia, and built defensive fortifications on the border with Nubia in Semna.

The Middle Kingdom came to an end during the Second Intermediate Period, Egypt once again split into two independent states when Lower Egypt was conquered by the Hyksos, who came from Asia.

Egypt was unified for the third time, when the native Egyptian rulers of Thebes regain Lower Egypt from the Hyksos.

This sparked the start of the New Kingdom of Egypt, which is perhaps the most prosperous period in Egyptian history.

The construction of giant pyramids was at that time considered outmoded; instead pharaohs of the New Kingdom built sumptuous temples, funerary complexes, palaces and statues to glorify their rule.

It was also during the New Kingdom that Egypt conquered a huge empire.

Pharaoh Thutmose III (1479-1425 BC) is credited with the greatest territorial expansion of all. He conquered the entire coast of the Levant in the north and all of Nubia in the south.

Perhaps the most famous pharaoh of the New Kingdom was Akhenaten.

He abandoned the traditional Egyptian religion and promoted the worship of a unique God known as the Aten (the disc of the sun).

His successors reestablished traditional polytheistic religions, abandoned his new capital city, and even tried to destroy most of the works of art and even Akhenaten’s record as a pharaoh.

While Akhenaton had focused his attention on internal affairs: the promotion of his new religion, the Hittites had gradually extended their influence and took control of much of Syria.

Pharaoh Ramses II (1279-1213 BC) was responsible for the reconquest of these lands and the restoration of the New Kingdom of Egypt in the territorial control that had exerted during the time of Thutmose III.

During a period known as the Bronze Age Collapse, the New Kingdom was shaken by the invasions of the ‘ Peoples of the Sea ‘ and the Libyans of the Western Desert.

This marked the beginning of the decline of the New Kingdom.

By the year 1000 BC, Egypt was once again divided. The period between 1069-653 BC is known as the Third Intermediate Period, many dynasties competed for control of Egypt, including those of foreign origin, such as the Meshwesh Kings who came from Libya and ruled over parts of Lower Egypt, and the Nubians who they reaffirmed their independence and established the kingdom of Kush.

During the 8th century BC, the king of Kush Piye took advantage of the political turmoil in Egypt with the invasion of the country, after a campaign of 20 years had successfully conquered all of Egypt and created the Kushite Empire.

The Kushite Empire is also known as the 25th Dynasty, for the first time Egypt was ruled by a line of Nubian pharaohs from its capital of Napata, in Nubia.

The Kushite pharaohs ushered in a new period of construction of pyramids in the Nubian area.

The Kushite pharaohs were expelled from Egypt when the Assyrians invaded in the 7th century BC.

Then Egypt went through successive foreign conquests, the Assyrians were followed by the Persians, the Macedonian Greeks, the Romans and the Arabs.

But for most of this period of successive foreign occupation, Egyptian culture and religion remained intact, the Egyptian people continued to worship their local gods and using their local language.

The last remaining native Egyptian temple was the temple of the goddess Isis in Philae, which was closed by order of Emperor Justinian in the 6th century AD, thus putting an end to the last remains of more than 3500 years of Egyptian religious traditions.