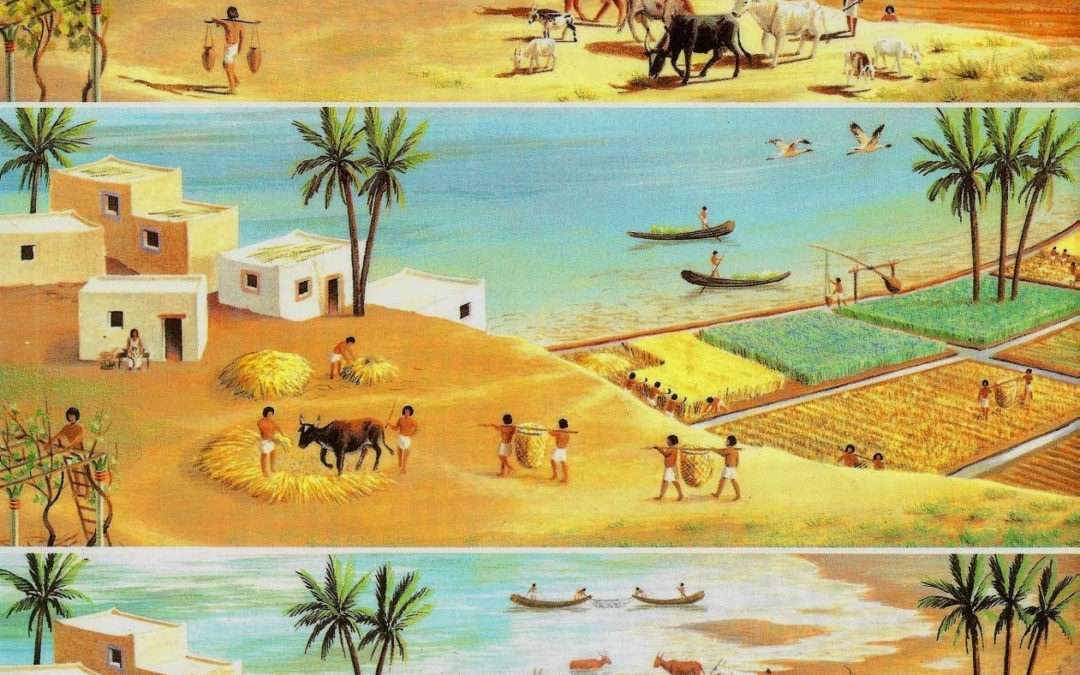 Farming in Ancient Egypt was linked to the flood of the Nile and the silt deposited in the soil, turning it into a green and fertile mantle.

Some invading brought new species such as apples, olives and pomegranates. In addition, pears, peaches, cherries and almonds appeared during the time of the Greek pharaohs. To make fabrics and ropes, the farmers in ancient Egypt also cultivated flax.

In July the flow of the Nile grew and the farmers could no longer work as the fields flooded. In October, the waters retreated, it was the time of sowing and the farmers plow the land and repaired the canals. In March, the dry season arrived, it was time to harvest.

After the flood, the mud that covered the fields was easy to work with. While a sower threw the seeds, the farmer plowed the land with the plow pulled by cows or oxen. The seeds buried in the soil germinated faster and were not eaten by the birds.

In the fields covered by the flood for longer, the farmers did not work, they let their flocks of sheep, goats or pigs, buried the grains trampling the earth.

In ancient Egypt almost no rain, to prevent the plants from drying, farmers in ancient Egypt dug small channels that filled with water from the Nile.

Until the New Kingdom, they used pitchers, later they invented the Shadoof, an instrument still used today, formed by a crowbar with a container on one side and a counterweight on the other.

But year after year, the floods destroyed all the channels and had to be rebuilt.

Since March, the flax stems blooming, as they were the tender fibers that gave the best fabrics. Then it was the harvest of wheat and barley.

The stems were cut below the spike with a sickle made with a piece of hippopotamus jaw with embedded polished chert fragments.

The abundance of the crops depended on the rise of the Nile. If it was scarce, few fields were flooded and few were cultivated.

Farmers in ancient Egypt also had to face the animals that devastated the fields, such as birds, hippos, locusts, mice, wandering cattle…

To scare away birds, they invented scarecrows and to protect crops from catastrophes and favor the harvest, they invoked to the gods.

The stages of Egyptian farming depend heavily on the floods. Floods caused during the summer season in the upper part of the Nile River Basin (located near the equator).

The floods that occurred in mid-June allowed the soil to moisten and provide it with silt, a sediment rich in nutrients that would favor maintaining the remarkable agricultural production.

Thanks to this mechanism the Egyptians worshiped Hapi, God of the annual flooding of the Nile.

Artistic representation of life in the cultivation fields of Ancient Egypt. Note in the upper part the Nile River and the great dynamics that it gave to the life of the Egyptians.

Design and Background of Hatshepsut Temple in Deir el Bahri