Home / Perfume, the secret passion of the ancient Egyptians 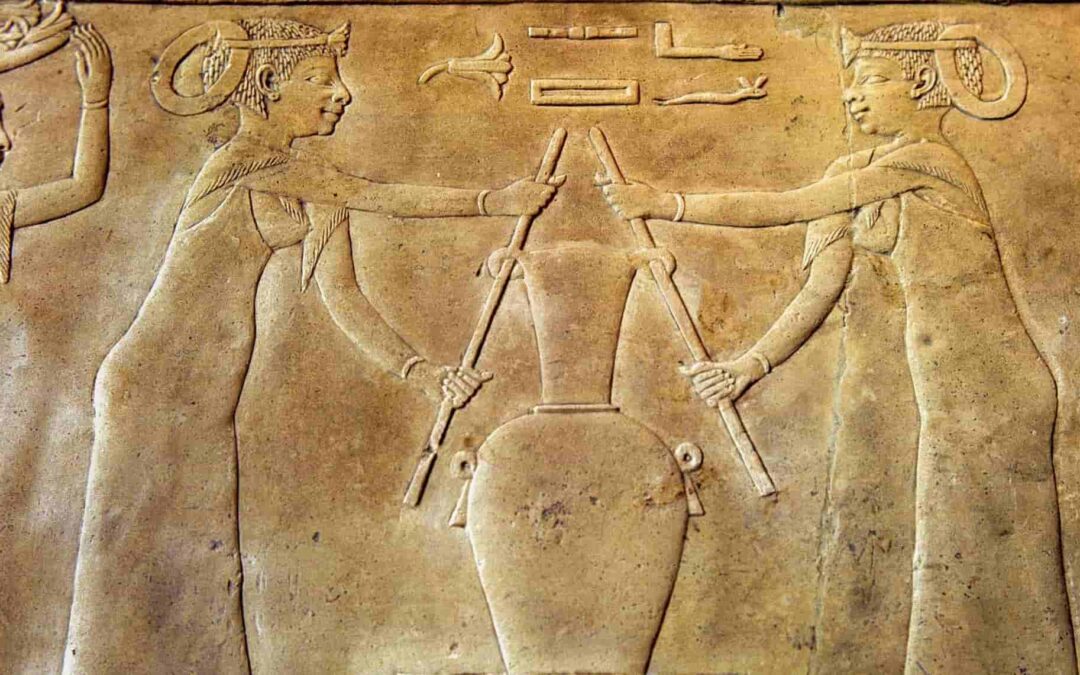 In ancient Egypt, sophisticated perfumes were used for personal care and in religious and funeral rituals.

“When you prosper and found your family, love your wife very much, feed her, dress her, anoint her body with ointments …”.

This recommendation that a father made to his son in the Teachings of Ptahhotep, a collection of moral proverbs of the V dynasty (around 2400 BC), shows the importance of perfumes in the life of the Egyptians from the earliest periods of their history.

Indeed, perfumes were a staple in men’s and women’s personal care. As at present, they were kept in special jars, of which many specimens have been found in numerous New Kingdom tombs and which were made of various materials: fine alabaster, faience – a kind of shiny bluish earthenware – or glass decorated with lines of colors on a preferably dark blue background, to avoid that the effect of light could alter the aromatic oils they contained.

Perfumes were an indicator of presence and social status. Guests at a lavish banquet applied an odorous oil or ointment to their wig, as many tomb paintings show.

But they were also attributed hygienic properties, as a way to dissipate bad odors, and even healing. It was believed that certain fragrances served to purify the air and ward off all kinds of diseases.

The scent of the gods

On the other hand, in Egypt perfumes were closely related to religious practice. In the ceremonies that were carried out in the temples, all kinds of ointments and fumigations were used, made with resins or with compound preparations – such as kyphi or kapet, a type of incense that included raisins among other ingredients -, which were synonymous with purity and had a symbolic meaning in the liturgy.

The historian Plutarch tells that incense was burned in the morning, myrrh at noon and kyphi in the afternoon. The priests also anointed the statues of the gods with various ointments and perfumes.

Likewise, certain perfumes were used in funeral rituals that gave the deceased “the smell of divinity”. Mummies were anointed with perfume to give them life and make them agreeable to the gods.

The quality of the perfumes that were made in ancient Egypt gave the Nile Country great fame throughout the Mediterranean.

The Egyptians used native flowers such as lily, iris, myrtle, white lotus, blue lotus and flowers of different varieties of acacia, as well as aromatic plants such as mint, marjoram, dill and fragrant reeds.

Henna flowers, camel thorn root (a type of acacia) and thimbles of the balanito fruit were also used, which were very aromatic.

However, some substances were obtained through expeditions to distant lands, the exchange in foreign markets or the payment of taxes from vassal territories.

Plants such as jasmine were imported from India, which has a white and very fragrant flower; spices such as cinnamon and saffron, and a large number of resinous substances.

The latter formed a very broad chapter, which included frankincense, myrrh, balsam, coniferous resins such as some pines, and turpentine.

Many are difficult to identify in ancient texts, and although the Egyptians distinguished them well, they sometimes grouped them under the generic term “incense”, as a synonym for the odorous resinous substance that exudes its perfume when burned.

To extract the essences, the ancient Egyptians macerated the parts of the plant in a vegetable oil, such as the barnacles that they obtained from the fruit of the balanito, or the baq oil, which they extracted from the ben nut, the fruit of the moringa tree, which grows in Egypt.

In addition to vegetable oils, the ancient Egyptians used other materials to macerate plants, such as animal, beef or duck fat. It was a technique similar to that of the current enfleurage, which consists of alternating layers of fat and layers of flowers and leaving them to macerate until obtaining the fat impregnated with the essence.

To achieve the persistence of the aroma and delay the evaporation, a fixative was added, such as the date palm spathe, mentioned by Dioscorides. Through these techniques the ancient Egyptians made characteristic perfumes, which made them famous within and outside their borders.

We do not know if the profession of perfumer existed in Egypt, but what is clear from the information provided by the texts, the iconography and the remains found in containers is that there were those who thought what the appropriate fragrance should be for each occasion and calculated the optimal proportion of elements to achieve it.

Read more: Scientists recreate 2,000-year-old perfume that may have been used by Queen Cleopatra

The stone "calendar" of Nabta Playa, the Stonehenge of Egypt