Home / The stone “calendar” of Nabta Playa, the Stonehenge of Egypt

The stone “calendar” of Nabta Playa, the Stonehenge of Egypt 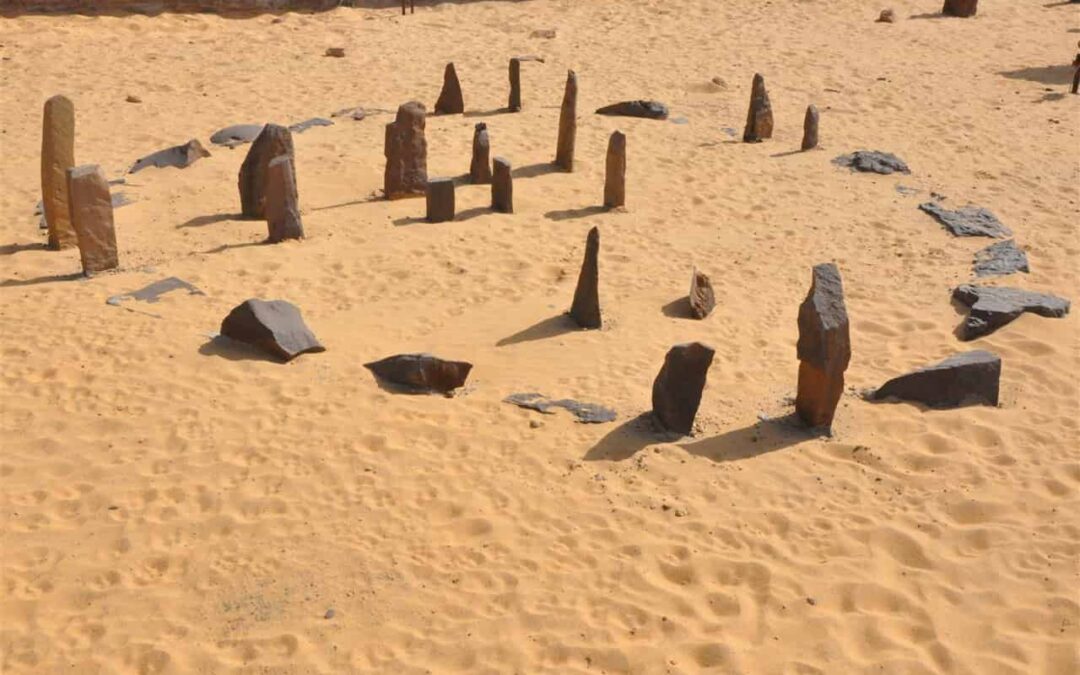 In this place of the Nubian desert there are remains of some ancient structures that some researchers consider an antecedent of the Egyptian civilization.

Among them is a small circle of stones that apparently served as an astronomical calendar to mark the summer solstice. What similarities does it have to the Stonehenge in England?

In an area of ​​the Nubian desert known as Nabta Playa (about 800 kilometers south of Cairo and about a hundred kilometers west of Abu Simbel, where the great rock-cut temples erected by Pharaoh Ramses II stand).

Between 130,000 and 70,000 years ago there was a fertile savannah, with abundant vegetation and numerous wild fauna, washed by the waters of a large lake that is now dry. In that lush, heavenly place, humans have settled since at least the tenth millennium BC.

Nabta Playa is made up of various archaeological remains scattered throughout the area, which were discovered in the 1970s by Fred Wendorf, Professor of Anthropology at South Texas Methodist University.

Wendorf, along with linguist Christopher Ehret, suggested that the people who inhabited Nabta Playa were nomadic herders. The researchers found there evidence of consumption and storage of wild sorghum (a cereal) and remains of ceramic decorated with geometric motifs, the oldest discovered on the continent.

All the discoveries made at Nabta Playa have led many researchers to think that the roots of Egyptian cosmogonic beliefs can be found here.

Towards the seventh millennium BC, the human settlements in Nabta Playa increased and became larger, although they were seasonal, coinciding with the times of greater capacity of the lake.

Its inhabitants dug wells and consumed wild grains, legumes, and fruits. They also began to domesticate animals, such as goats and sheep from the Near East.

Some burial mounds date from the sixth millennium BC that include remains of animal sacrifices that were buried in chambers covered with stone slabs.

Four shallow hills in Nabta also contain sandstone stelae, many of them carved, some anthropomorphic and of various sizes and shapes.These stelae were placed in a vertical position, surrounded by smaller stones. Its weight ranges between one hundred kilos and eight tons.

But it would be a millennium later when a surprising construction was carried out in Nabta Playa, which still leaves researchers astonished today: up to six alignments of stones, placed in a radial way, which seem to have served to indicate the appearance in the sky, of some stars or to indicate the approximate direction of the sunrise during the summer solstice.

This structure measures only four meters in diameter and is made up of around thirty slabs of Nubian sandstone of different sizes arranged in a circular fashion.

The structure includes four pairs of larger stones around the circumference of the circle and another six within it, forming two parallel lines of three stones each.

Fred Wendorf used satellite technology to study the alignment and found that two of the largest pairs align to form a north-south line and the other two pairs form an east-west line. The latter indicates the place where the Sun rises and marks the summer solstice, although in an approximate way.

As with the famous Stonehenge, numerous researchers have tried to solve the mystery of the “astronomical calendar of Nabta Playa”.

The North American archaeoastronomer Kim Malville states that some vertical slabs, driven into the sand, seem to be organized according to a series of “doors” that could have functioned as markers on a calendar by indicating in an approximate way the position of the rising Sun on the solstice of summer.

For his part, astrophysicist Thomas G. Brophy suggested that the three stones aligned to the south represent the stars of Orion’s belt and the other three would point to its main star.

Brophy also believes that the other five alignments that surround the stone circle in a radial fashion would be representations of where in the sky the stars represented by the central stones of the calendar are found during heliacal rising (the time of their first appearance on the horizon).

He even bets on a much older dating for the structure: more than eight thousand years.

But Brophy’s theories have been questioned by most researchers, and a 2007 University of Colorado study concluded that the dates proposed by the astrophysicist are wrong.

Researchers from this North American university believe that the Nabta Playa area must have been a ceremonial center where animal sacrifices were carried out around 6100-5600 BC.

The dating that they suggest for the stone chrome is a date close to 4800 BC. Measurements carried out by the satellite and GPS team also confirmed a possible alignment with Sirius, Arthur, Alpha Centauri and the Orion Belt.

The study suggests that the orientation of megaliths, stelae, human and animal tombs would indicate a symbolic connection with the North.

So what was this structure for? There is some consensus among researchers in thinking that it served as a meeting point to celebrate religious ceremonies of some kind during the summer solstice.

It was a key moment for the inhabitants of Nabta Playa, since this time heralded the arrival of the rains, a fundamental event for a nomadic people whose survival depended on livestock, water, Earth, the Sun and the stars.