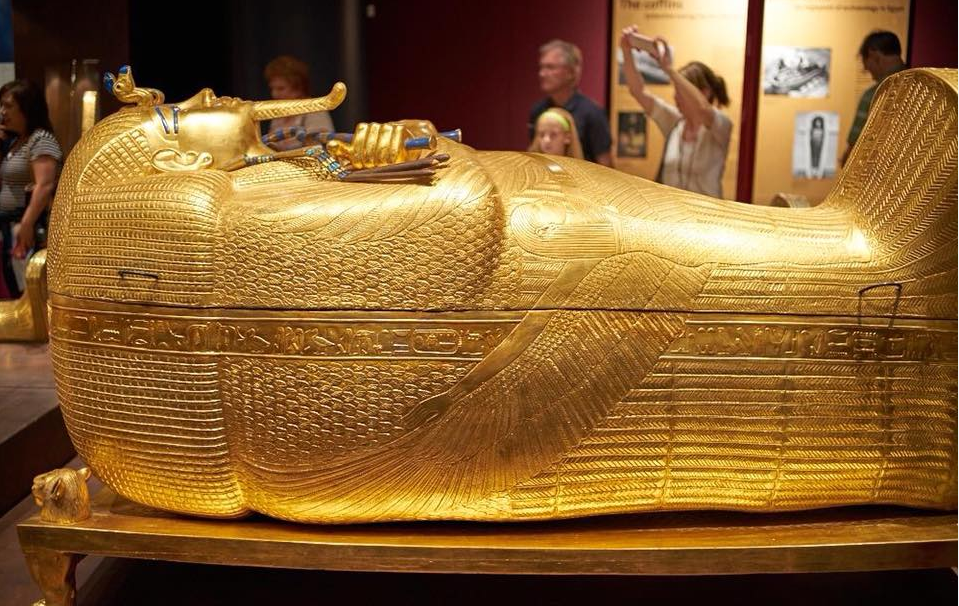 It is probably one of the greatest discoveries of the 20th century that archaeologist Howard Carter made in 1923. The tomb of King Tut had revealed to the world its splendor and wealth. Moreover, he had been spared by thieves and looters.

But did not this invulnerability conceal a well-buried secret with all its treasures? Some spoke of curse because a large number of people died after visiting the site. So, true curse, dramatic coincidences or embellished legends?

Tutankhamun was the king of Egypt at the time of the 18th dynasty. He was crowned between 7 and 9 years old (the experts still grope about his age) and died at 19 years old.

Because of his young age, Tutankhamen could not build a temple at the height of his ambition. He had to fall back to a simple tomb in the Valley of the Kings near Luxor on the banks of the Nile.

We do not know much about King Tut as such during his reign. We know that he was terribly in love with his wife and that he was a great warrior.

The paintings that adorn King Tut’s tomb made it possible to claim these affirmations without being afraid of making a mistake. Tutankhamun‘s death remains questionable.

Some archaeologists believe that he was murdered with a blunt object on the back of the skull. The discovery of King Tut’s tomb

In 1922 Lord Carnavon, a wealthy English businessman, fascinated by Egypt, unblocks funds to undertake excavations in the Valley of the Kings.

It mandates the famous Egyptologist Howard Carter, who certifies that inviolable tombs are yet to be discovered.

Howard Carter goes to work, but it seems that his expedition is doomed to fail, because after two years of excavations, he still has not found anything.

Then, at the end of 1922, a worker accidentally discovers a series of steps just below the entrance to the tomb of Ramses V.

Howard Carter exults, but he must clear a large number of rubble so to reach a sealed door. It is the tomb of Tutankhamun, a king almost unknown at the time.

Howard Carter warns Lord Carnavon, who despite his fragile health, decides to make the trip to attend the opening of the burial.

It reigns a tense atmosphere, following the allegations of some workers who say they read a sentence on the front door:”death will touch with its wings the one who disturb the Pharaoh”.

Little superstitious, Howard Carter first pierces a hole in the door, so that the air can penetrate and purify a little this place remained closed for so many years.

It will take him nearly two months of work before finally reaching the room of the sarcophagus and King Tut’s treasure room. But what a treasure!

Howard Carter will take almost four years to record everything in an extremely meticulous way and to transport all the goods to the Cairo Museum.

A series of strange deaths

First to discover the tomb. The fetish canary of Howard Carter is swallowed by cobra. A rare thing because cobras are rare in Egypt especially at this time of the year.

A few months after the burial was revealed, Lord Carnavon died at the Cairo hospital following the infection of a mosquito bite. At the moment of his death, a power outage occurs and affects the entire city.

It does not take more for the avid journals to see his death more than a mere coincidence. Six months after the death of Lord Carnavon, his brother Aubrey Herbert and the Lord’s nurse died tragically.

Shortly after, Carter’s secretary and Lord Westbury’s only son, Richard Bethell, leaves the world of the living. Mad of sorrow.

Professor Lafleur, a close friend of Howard Carter, arrives a week after Lord Westbury’s death at the site of the tomb. He will only stay there a few weeks before dying of a mysterious illness.

Come close to Arthur Mace, Carter’s close collaborator who bowed out a month later. It seems he lost all his strength after entering the funeral home. He died a month later.

Dr Evelyne White, a close associate of Carter, fell into a strong nervous breakdown after being one of the first to enter King Tut’s death chamber.

Her illness unfortunately pushed her to end her life three months later. Archibald Douglas Reed, who was ordered to X-ray the mummy of Tutankhamen before being transported to the Cairo Museum, succumbed a few days later due to discomfort.

Finally, professors Douglas Derry and Garries Davis also died of mysterious death after examining the mummy or objects from the tomb. In total, 17 people died after being in contact in any way with the tomb or Tutankhamun….!

Is the curse of King Tut real?

It is clear that all these deaths in so short a time seem particularly curious, and the story of a curse striking those who plunder the tomb of the king Tut takes on a magnitude rarely reached in the history of archeology.

And then there is the phenomenon of the excavation of a tomb, which, in our civilization as well as that of the Egyptians, is only little understood and admitted, even if it is destined for a scientific purpose.

It goes beyond looting and goes against the basic principles of religion. All these elements are fast, through the journalists, to give rise to many stories of curses. But what is it really? And can we rationally explain all these deaths?

The Mummy of King Tut

At the time, forensic tools were not the same as today and some diseases were not yet well understood and treated.

In particular, tuberculosis and pneumonia, which are in many cases responsible for many deaths. Lord Carnavon , for example, was already suffering from pulmonary troubles for several years. His fragile health was also an aggravating factor in the infection that struck him down.

Now it is a question of relativising certain facts that have occurred. First, the inscription on the entrance door of the tomb.

This one never existed, and was assembled from scratch by the journalists. Then, the death of the canary, which remains to this day subject to caution.

While Howard Carter speaks in his diary, it seems that this episode was to the credit of a fierce opponent to the excavations and who would have introduced a cobra   in the cage of the bird.

Because to find a cobra in Egypt at this time of the year, would be to find a marmot on the Cote d’Azur in the middle of January…? Howard Carter, however, was never troubled by illness and lived until 1939, like many around him in his digs.

One of the answers to these diseases came to us in 1985 during the restoration of Ramses II’s mummy. His analysis allowed updating small fungi toxic to humans.

And according to Howard Carter’s notes, we know that one of thought to cause precipitin pneumonia.

What many scientists and specialists have suffered during an exposure too pronounced? Concretely, one should therefore speak more about the archaeologist’s disease than a curse of a mummy.

But the legend is launched and already we adapt films retracing the curse of the mummy. And when fiction goes beyond reality, it is difficult to contradict or stop it.

Unfortunately for followers, there is no more curse than palm in Alaska. All these deaths are primarily due to unfortunate illnesses and coincidences.

Most have been well embellished by the media, who have given themselves a pleasure to use this vein. The spirit of the young pharaoh was far less vengeful than that of the journalists, and in any case, Ancient Egypt does not need a curse to make us dream historically.

Sydney to Host Largest Tutankhamun Exhibition to Ever Leave Egypt