Home / The riddle of the Scorpion King

The riddle of the Scorpion King 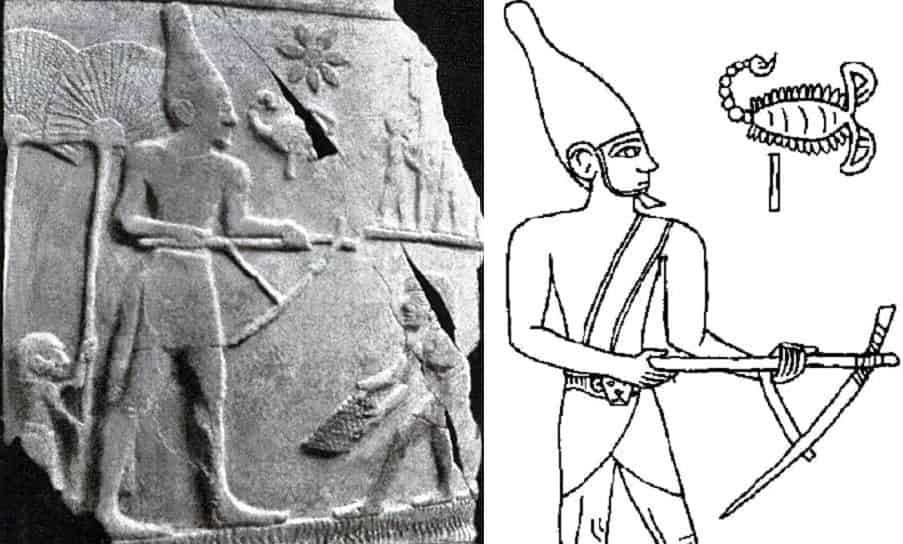 A striking piece of limestone dating back five thousand years, discovered at the ancient Egyptian site of Nekhen (Hierakonpolis), already reveals the imminence of the birth of an organized state and the existence of an all-powerful monarch. But who was this character?

Between 1896 and 1898, the British archaeologist James Edward Quibell and his colleague Frederick William Green were excavating in the ancient predynastic city of Hierakonpolis (known as Nekhen to the ancient Egyptians), near present-day El-Kab, in Upper Egypt, when they made a surprising discovery in one of the temples in the city:

A highly fragmented limestone mace head, dated around 3100 BC, 25 centimeters high and 9 kilos in weight, which was curiously decorated.

In it you could see the image in relief of a king wearing the white crown of Upper Egypt, with a bull’s tail hanging from his waist and carrying an agricultural instrument in his hands (a hoe).

The monarch, represented in a large size, seems about to open an irrigation canal. On his head a rosette-shaped flower was arranged, with seven petals (a symbol used during the Egyptian predynastic to symbolize the sovereign) and, the most curious thing, in front of the king’s face the figure of a scorpion can be clearly appreciated.

As there is no more information on the name of this ancient ruler, Quibell baptized him as the Scorpion King. The splendid piece was taken to the Ashmolean Museum in Oxford, where it is currently on display.

We can infer from the image represented on the mace head that already at that remote time, and under the command of this king, Egypt seems to have had an effective control over agriculture.

The ancient Egyptians of that time were already capable of building canals and reservoirs, so much needed to obtain good crops and avoid famines.

In the images of the mace head, distributed in three registers, Scorpion, which presides over the central register, seems to inaugurate a new channel.

The lower register shows some characters working the land and transporting a kind of palm tree, ready to be planted.

Finally, the upper register recreates eleven banners that identify a series of provinces or tribes, perhaps from the Delta, in the north of the country.

From each of them hangs a dead bird that looks like a lapwing, which very possibly means the defeat of these northern populations at the hands of Scorpion.

One hundred years later, in 1988, a German archaeological mission, led by the Egyptologist Gunter Dreyer, who was carrying out excavations in the royal cemeteries of Abydos, in Umm El Qa’ab, in Upper Egypt, discovered, in the so-called ” U “Cemetery, a large underground tomb (UJ) made up of twelve rooms.

The tomb had been looted in the most remote antiquity, but in one of its chambers the archaeologists found a heka ivory scepter (in the form of a crook), a symbol of royal power, and some four hundred ceramic vessels from the Near East, which attests to the existence of commercial relations between both territories at such a remote time.

Some of these jugs had the symbol of the scorpion painted on one of their sides. Had archaeologists discovered the tomb of the mysterious ruler whose mace was found by Quibell?

Although this extreme could not be confirmed, it has been possible to date the tomb to about a hundred years before the First Dynasty of Egypt, around 3200 BC, a period that Egyptologists have dubbed the O Dynasty.

But recent research suggests that the tomb UJ of Abydos belonged to another Scorpion king, who reigned before the monarch represented in the mace head of Hierakonpolis. Researchers have named him Horus Scorpion I.

But then who was the Scorpion king depicted in the mace head discovered by Quibell in Hierakonpolis?

The reliefs on this piece clearly indicate that he was a king of Upper Egypt and at that time the country was not yet unified.

Researchers have not yet reached an agreement on this, but one of the most widespread theories is that this character, whom researchers have dubbed Horus Scorpion II (Hor Serq), was possibly the father or predecessor of Narmer, the king to whom the unification of Egypt is unanimously attributed and who is considered the first pharaoh in history.

It is not known with total certainty where Horus Scorpion II was buried, but Dreyer and his team pointed out as a possible burial place of this ruler the tomb B-50 of the so-called “Cemetery B” of Abydos.

The tomb consists of four chambers, and when they excavated it, archaeologists discovered that it was completely empty, except for a few small bone labels on which a series of numbers had been inscribed, as well as several faience beads.

The tomb is difficult to date, which makes it difficult to know who its owner was. Although Egyptologists think that its orientation, similar to the tombs of other predynastic pharaohs such as Ka (tomb B 7/9) and Narmer (tomb B 17/18) is a factor to take into account to affirm that it is the tomb of Scorpion II.

Actually we can know little about the true Scorpion king, although Hollywood has been responsible for filling that gap with a series of films (specifically four) dedicated to the character.

Obviously, the cinema is entertainment and we all like adventure films, even if they do not adjust to reality. In the case that concerns us, the same thing happens and we can affirm without fear of being wrong that all similarities between the real Scorpion King and the fictional one, as one would say in the cinematographic world, “is pure coincidence”.

Queens of the Middle Kingdom: The Hidden Queens