Home / The mystery behind the Egyptian hieroglyphs of advanced technology

The mystery behind the Egyptian hieroglyphs of advanced technology 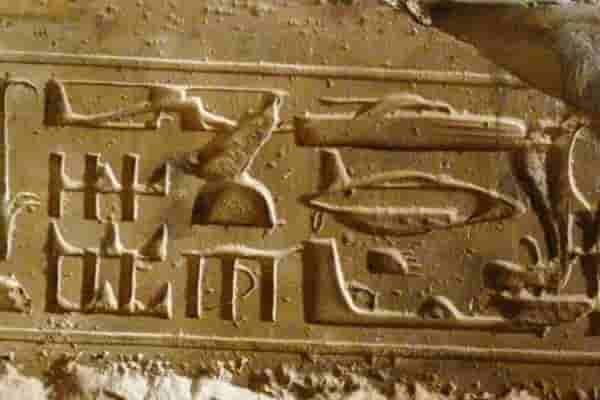 We tell you what is behind the famous hieroglyphics of Abydos , from the temple of Pharaoh Seti l, in Upper Egypt, which show representations of modern ships, helicopters and even submarines!

Alien sightings? Did the Egyptians actually have contact with a more advanced and unknown civilization?

Indeed, this historical piece that has virally traveled the entire globe since its discovery exists and is real … however, what not many know to get carried away by the first and extraordinary impression it gives, is that there is also a fairly assertive and logic of why the ancient Egyptians made these modern figures inconceivable for their time.

The place and the set where these controversial hieroglyphs are engraved can be found in the first column room of the temple of Abydos, approximately 500 kilometers from Cairo.

Initially when these images came to light for their great and incredible impact, it was thought that it was a false fact and edited to generate controversy.

However, when the information was thoroughly analyzed and verified, the opposite was demonstrated … in fact it still exists in the temple of Abydos.

At first glance, we would understand the images as incredible representations of extraterrestrial beings with advanced technology, also giving an explanation to the fantastic constructions that the ancient Egyptian civilization made.

But … what is true in these hypotheses? Did the ancient Egyptians really carve these figures out of stone?

These hieroglyphs according to the most accepted – and logical – investigations are the product of a palimpsest.

A palimpsest is an ancient manuscript, which for various reasons was altered or rewritten over time, on top of another for the purpose of erasing the old one.

Furthermore, on the other hand erosion – what is known as wear on the surface of a material over time due to some type of rubbing with another – also did its job to produce the current appearance of these carvings.

The Egyptian hieroglyph of advanced technology was discovered by Dr. Ruth McKinley-Hover and her husband when they visited the Temple of Abydos in 1987.

While Ruth was taking some photographs of the Egyptian hieroglyphic panels, one collapsed, giving way to a new one with much older images, seeing this, the photographer did not hesitate to document perhaps an incredible finding that seemed to contain the figure of a helicopter.

The photos were used by theorists of the ancient astronauts and believers in ancient technology, who retouched them erasing a part of the bird that was in said engraving, so that the alleged helicopter looked more detailed and led us to believe without hesitation that it was a helicopter; additionally, other things were edited in the photograph.

Despite all this controversy, the reality is that the original hieroglyphs were simply erased and replaced by a new set.

In this case, the name of Pharaoh Seti I was plastered to disappear, reflecting in its place that of Pharaoh Ramses II.

Due to causes such as erosion, the two names were mixed and this combination was obtained.

Why do Egyptian statues have broken noses?

Do you know the fascinating legend of Apis, the solar bull?