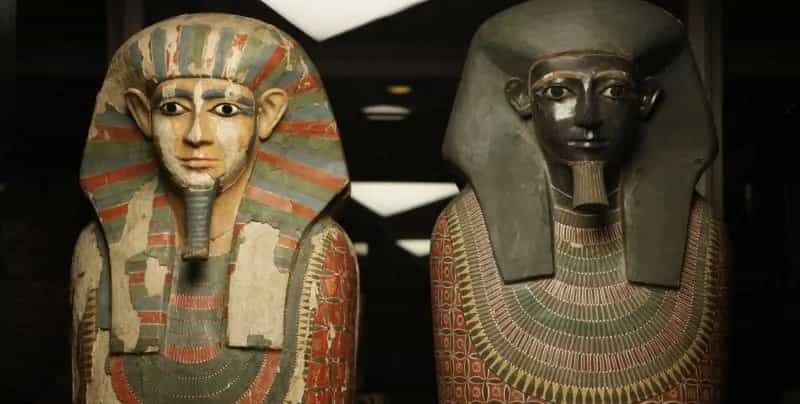 The Two Brothers are the oldest mummies in the Manchester Museum and one of the best known in its entire Ancient Egyptian collection.

The remains belong to Nakht-Ankh and Khnum-Nakht, two men of high status, who were buried together at Deir Rifeh, a town south of Cairo, around 1800 BC.

The tomb was discovered in 1907 by the team of Egyptologists Flinders Petrie and Ernest Mackay. Hieroglyphics on the coffins indicated that they were both sons of a local governor and had mothers with the same name, Khnum-aa. From there, they were known as the Two Brothers.

However, doubts about their parentage have always hung over them.

In 1908 the contents of the burial were shipped to Manchester and the mummies were opened by the first female Egyptologist, Margaret Murray.

Her team concluded that the skeletal morphologies were different, which indicated that they had no family relationship, so it was thought that one of the brothers had been adopted.

In order to unravel the mystery, the latest generation of DNA sequencing techniques has been applied. In 2015, they managed to extract from their teeth, through this new method, mitochondrial fractions (which are only inherited from the mother) and the Y chromosome (present only in male individuals).

The results show that Nakht-Ankh and Khnum-Nakht share the mitochondrial M1a1 haplotype (set of DNA variations that tend to be inherited together), which would indicate a maternal relationship.

Although the Y-chromosome sequences were less complete than in the case of the mitochondrial material, they showed variations between the two mummies, indicating that the Two Brothers were actually half brothers, having the same mother but different fathers.

What is the story behind “The Mummy of the Screaming Woman”?