Home / The Valley of the Golden Mummies

The Valley of the Golden Mummies 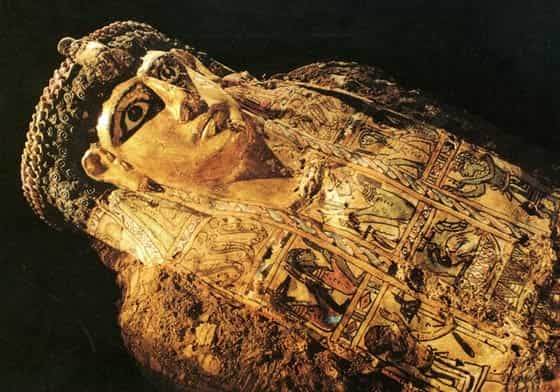 The Valley of the Golden Mummies is the largest cemetery in Egypt dating back to Greco-Roman times. It revealed around 250 mummies and most of them are aristocracies who lived in the Bahariya Oasis ( in the Western Desert of Egypt), during Greco-Roman times.

The Valley of the Golden Mummies was discovered in 1996 by Dr. Zahi Hawass and his Egyptian team at Bahariya Oasis, located about 420 km southwest of Cairo in one of the deserts toughest in the world.

The Valley of the Golden Mummies: It is a set of tombs built during the Greco-Roman period, in different styles and for very varied ranges of the social scale.

But why “golden”? Well, it has to do with the gold and stucco masks that these mummies (as we said, corresponding to high-ranking people in the Egyptian social pyramid at that time) wore on their faces when they were found.

For this reason, it is common for this place to be known as the Valley of the Golden Mummies.

For experts, these tombs are the most outstanding mortuary building ever discovered in Egypt. They are the best-preserved mummies with the greatest amount of elements that are known so far from the Greco-Roman period.

So let’s see what are the objects found and what they tell us about those officials who died two millennia ago.

Many of the mummies were still in good condition when they were discovered by Hawass and his team. They were decorated in different styles.

There were four general styles of the mummies at Bahariya. The first style, which was found on approximately sixty mummies, has a gilded mask covering the face and a gilded waistcoat depicting different scenes of gods and goddesses across the chest.

The second style is covered with cartonnage, depicting scenes of gods such as Anubis, the god of mummification, and his four children.

The third style was not decorated with gold or cartonnage, but rather was placed inside an anthropoid, a pottery coffin.

The fourth style was covered in linen.

Artifacts had been buried with each mummy. Some examples include jewelry bracelets, pottery of food trays, wine jars, and Ptolemaic coins.

The mummies found in the tombs in the Bahariya Oasis during the Roman period show that people during this period were wealthy because they were able to afford gilding and cartonnage depicting beautiful scenes.

Each mummy is different with the various styles and artifacts representing each individual. Dr. Zahi Hawass notes “it would seem that workshops were everywhere and artisans were one of the main professions in Baharyia” during this time.

The production of wine from dates and grapes was the main industry in Bahariya, contributing to the wealth of its people.