Home / The tomb of Ahmose, son of Ebana in the El-Kab necropolis 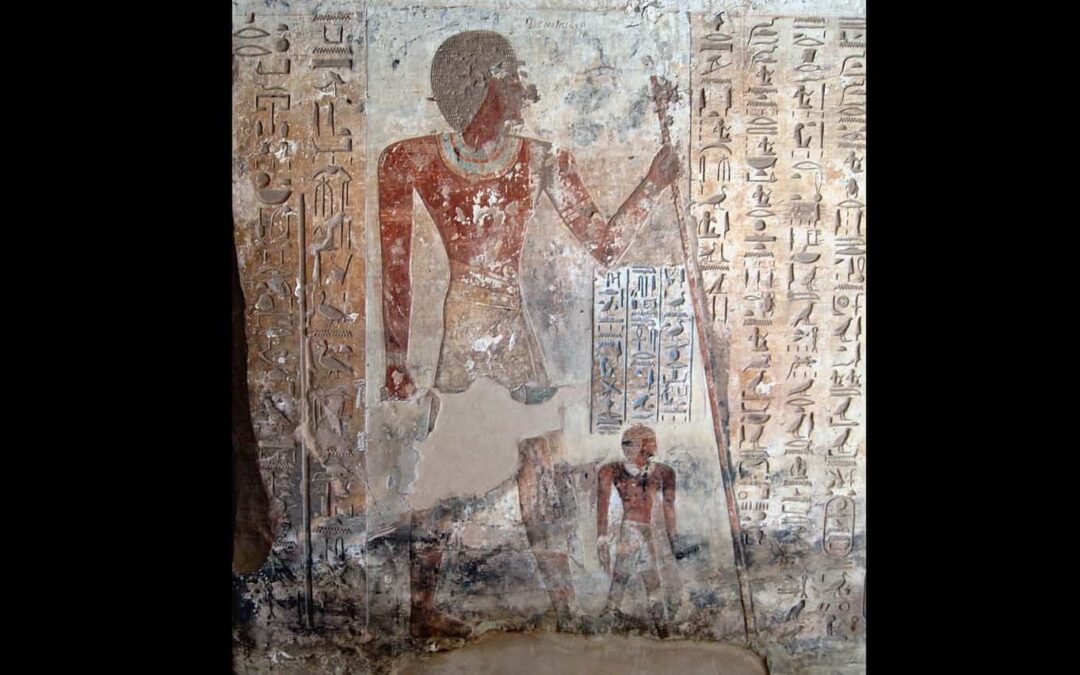 Ahmose’s tomb is located in the El-Keb city necropolis and is quite unknown, since it is not one of the most visited places by tourists.

The place is of great historical importance, as it is located opposite the ancient city of Nekheb.

It is the most important of all the tombs found in the city of El-Kab, which is the name given to two cities built on both sides of the Nile.

The symmetrical plan has a cruciform design, consisting of a deep room, a corridor, a wide room, and a sanctuary at the rear of the tomb.

The door is surrounded by a simple frame that contains the texts of the prayers, although the representations are hardly visible today.

At the entrance of the room, Ahmose stands in an attitude of adoration; inside the room the ceiling is vaulted and the wall is covered with a layer of plaster, possibly to enhance its appearance.

The right part of the room was carved in relief with figures of the King, Queen and the three princesses of the royal family, but on its left side there are only partially decorated sections.

Near the front of the tomb there is an abbreviated drawing of the temple, on the right the wall is damaged, but on the left it is decorated by four rows of soldiers that precede the royal carriage.

Engravings of the figures of the King and Queen riding on a chariot appear at the rear of the chamber.

In the lower register is the bedroom of the King carefully represented and a group of girls with musical instruments; to the right there are remains of an important representation of the King and to the left he appears seated at a meal.

The opening of the sanctuary appears undecorated and shows that it once had revolving wooden doors. Graffiti of Greek origin has appeared in this tomb, most of which are from the Ptolemaic period.

“Ahmose, son of Ebana, served in the Egyptian military under the pharaohs Ahmose I, Amenhotep I, and Thutmose I.

His autobiography has survived and is intact on the wall of his tomb and has proven a valuable source of information on the late 17th Dynasty and the early 18th Dynasty of Egypt.

Ahmose was born in the city of Nekheb, the modern El Kab. During the war to expel the Hyksos from Egypt, in the reign of Seqenenre Tao, his father enlisted in the navy.

After the deaths of Tao and his son Kamose, Ahmose began to serve as a soldier under Pharaoh Ahmose I. He participated in the battle of Avaris (the Hyksos capital in the Delta), where he killed two Hyksos and was awarded the “gold of valor” twice.

Ahmose also participated in the three-year siege of Sharuhen in southern Canaan for which he was rewarded. He followed his king to Nubia, where they put down three rebellions.

Under Amenhotep I, he fought against the Nubians and was given gold for his bravery.

During the reign of Thutmose I, Ahmose participated in a naval campaign against Nubian tribes in the Nile valley and was appointed admiral. He also followed Thutmose on a campaign against Naharin all the way to the Euphrates River.

Ebana was the name of Ahmose’s mother (and probably a very important woman); his father’s name was Baba. Paheri, the grandson of Ahmose and a scribe and priest of the goddess Nekhbet and tutor to the prince Wadjmose, supervised the building of his grandfather’s tomb.”

The Valley of the Golden Mummies