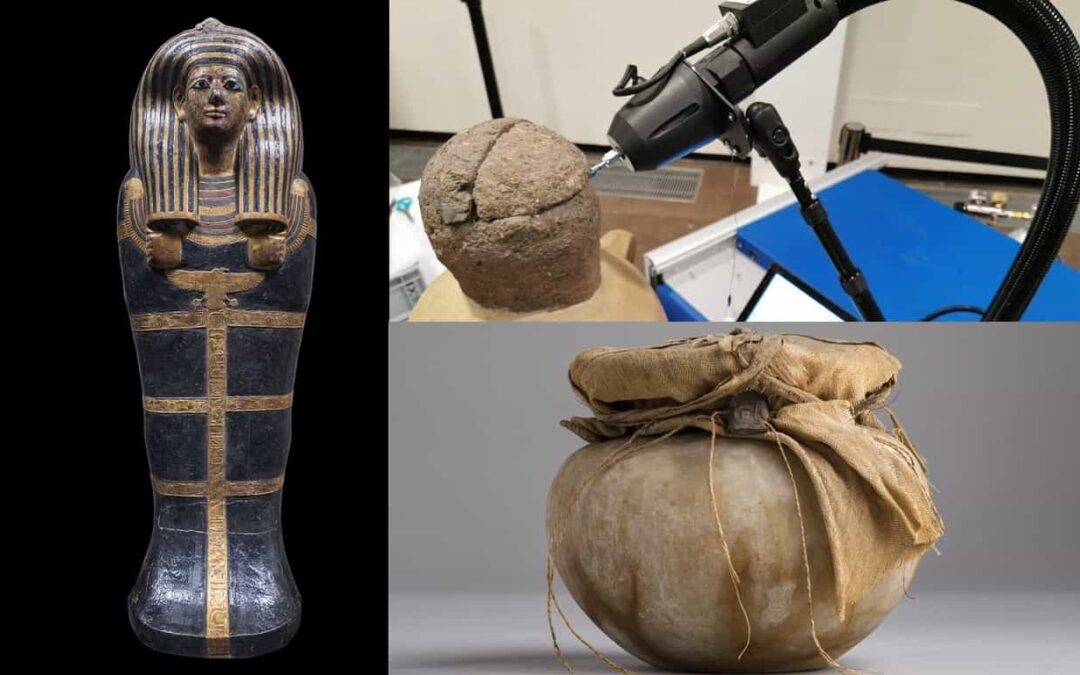 The intact tomb of the architect Kha and his wife Merit in Deir El-Medina was discovered in 1906. Today, all this treasure, including food offerings and amphorae with food and drink (some of them still sealed), is exposed in the Egyptian Museum of Turin, where these containers have been subjected to analysis with the most modern methodology to try to discover their original aromas.

Among the large funerary trousseau of the tomb are some fifty amphorae full of wine, grapes, salted meat, and flour. There were also baskets containing cumin and juniper and low wooden tables with vegetables, crushed carob beans, and bread.

Kha and Merit’s tomb remained untouched for millennia, until it was discovered in 1906 by Italian archaeologist Ernesto Schiaparelli.

The funerary trousseau remained complete and unchanged inside, just as it was deposited thousands of years ago. Kha was an important architect who lived during the eighteenth dynasty (1539-1292 BC), and his wealthy position allowed him to have quality grave goods.

In fact, when he entered the interior of the tomb, the Italian archaeologist was surprised to see that, in addition to food offerings, the tomb also contained garlands of flowers, a travel mat, Merit’s wig perched on its hanger, cosmetic boxes, sewing items, a razor, hairpins, a comb, and chests containing their clothes.

Also, there were numerous pieces of furniture, cups, an ewer, and various instruments related to Kha’s work, such as a wooden box to store some scales, an adze to flatten wood, a drill, a wooden tablet, and an ink palette.

Last but not least, a beautiful senet board was discovered there too, an extremely popular board game in ancient Egypt.

What did the containers in a tomb smell like?

The mummies of Kha and Merit were intact inside their respective coffins. The contents of their tomb were taken to where they rest today, the Egyptian Museum in Turin, and where the magnificent grave goods are displayed before the admiring eyes of their thousands of visitors.

In fact, when Schiaparelli discovered the grave, he did not unwrap the mummies, nor did he open the jars or amphorae to see what they contained.

Even years later, many of these materials have remained sealed, and their contents remain a mystery. But the museum curators had long been reporting a slightly sweet and fruity aroma that invaded the display cases where all these containers were exhibited. This aroused the curiosity of the researchers.

In 2019, to try and solve the mystery, Ilaria Degano, an analytical chemist at the University of Pisa, set out to analyze the odors given off by the containers in the tomb of Kha and Merit.

She used a novel technique that would allow the components of said aromas to be revealed, and the results have been published in the Journal of Archaeological Science.

In search of the original essence

Using an ion flow tube mass spectrometer, the researchers identified each sample’s aroma components. In forty-six of the vessels studied, they found long-chain hydrocarbons (suggesting the presence of beeswax), trimethylamine (an organic compound produced by dried fish), and fruit-related aldehydes (although, in many cases, it was impossible to pinpoint the type of fruit in question).

Likewise, characteristic elements of oils, vegetable fats, and barley flour (an essential element for manufacturing beer) were detected. “Two-thirds of the objects gave some result. It was a very pleasant surprise”, Degano comments, satisfied.

According to Jacopo La Nasa, another of the authors of the study, “although we were aware of the potential of the analytical approach, the analysis allowed us to detect some chemical species that we did not expect, such as those that can be correlated with the degradation of barley or fish. The main challenge is that the odor emitted by aged archaeological materials is different from that of native substances. Aged reference materials and degradation studies are needed to address the chemical analysis of residues of ancient organic materials.”

With this unique study, the idea of the scientists is to tackle a much broader project whose objective is to include a new analysis of the contents of the tomb of Kha and Merit; something that, they are convinced, will offer a much more complete picture of funerary customs of the time among wealthy people.

But would museum visitors be willing to go through such an immersive experience and discover what an ancient Egyptian tomb smelled like, complete with grave goods, something archaeologists have begun to call an “olfactory landscape”?

It could offer us the opportunity to smell the same thing that the son of Kha and Merit smelled when he was inside his parents’ tomb. An aroma that would be engraved in his olfactory memory when he came out and ordered that they were to be sealed forever.

The ships of the pharaohs