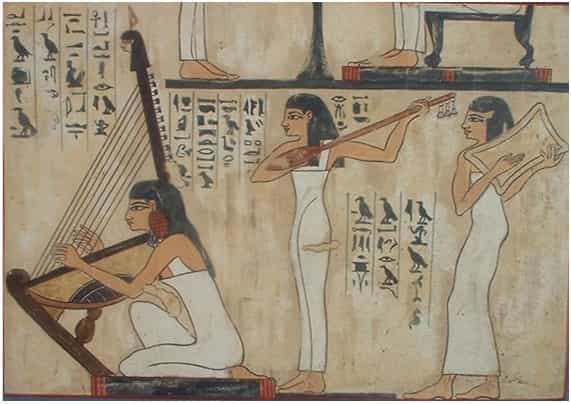 It is often difficult to imagine how the ancient cultures could have fun without all the things now available to entertain ourselves and spend our leisure time. But, the truth is that the ancient Egyptians used their free time participating in different sports and games, because not everything could be about work from dawn to dusk.

One of the most widespread pastimes, especially among the royal family and the elite, was the hunting of lions, leopards, and wild animals using bows and arrows.

Often, the pharaoh himself participated in these hunts. Although his figure was always protected, this showed strength and courage. During the Heb Sed ceremonies, he would also face a bull to prove his worth.

Wealthy people could afford to buy a boomerang, a foreign item used for bird hunting. The common people hunted birds or fished with harpoons; activities usually carried out as a family.

As in many other cultures, the elders were a source of wisdom, and were respected and listened to. It was normal for children and adults to gather around the elderly who told stories, most of them with a moral.

Wrestling, stick fighting, and archery stand out among the sports. They were very popular in Ancient Egypt since they were sports that judged precision and strength.

It is said that Amenhotep III was able to pierce thick copper ingots with an arrow, even if he was in a moving chariot.

There were other popular sports such as swimming, athletics, and javelin throwing. Perhaps the most curious of all of them was a sport played with palm branches, with which one tried to hit leather balls full of papyrus- similar to today’s hockey.

Games of chance were also very prevalent, such as the dice introduced by the Ptolemies, whose rules have survived to this day.

The Mehen or “snake game” consisted of a round board with squares and the head of this animal at the center. There were lion and lioness tiles and several red and white balls.

It is also believed that they played strategy games, which had a great reputation. Among them is believed to have been the Taw, which came to them during the period of Hyksos occupation (Second Intermediate Period).

The most popular board game in Ancient Egypt, and one of the oldest known, is the game of Senet, in which two players, separated by thirty squares, faced each other.

Each player had seven pieces, which were moved according to the number achieved by throwing two dice in the form of toothpicks to try to remove their pieces from the board as soon as possible; whoever succeeded won. Different variants of the same game can be found.

Of course, we must not forget the love the ancient Egyptians had for banquets, especially those large banquets with food, lots of beer, wine, and music.

Perhaps it was one of their favorite pastimes, especially for the elite, who did not miss the opportunity to celebrate a good banquet.

Musical accompaniment at large banquets was a form of delight for diners who enjoyed musicians. They were mostly women who played lutes, flutes, drums, and harps, although blind old men also played these instruments.

The songs, most of them festive, were accompanied by scantily clad female dancers and sometimes two singers, one of each sex.

The children, in addition to having fun listening to the stories of their elders, also spent much of their time outdoors. Since they either had a very strict education if they were of the nobility or had to help their parents in their trades, they left childhood too quickly but still enjoyed the freedom to run among their elders.

The girls sang ring songs and danced or played a game called The Merry-go-round or The Star: it consisted of two young people leaning on their heels and turning around other companions who held them by the wrists.

Jumping and racing were preferred by children, as were stunts. They also had toys such as clay, leather, or papyrus balls filled with little balls to make them roll and sound like an instrument. Dolls or small figures of animals made of clay were used for play, as well as small wooden toys, such as horses or seesaws, and even spinning tops.

Water sports could not be absent in a society so linked to the Nile River. One such game involved two teams that faced each other in “naval battles”. They also held regattas, where a team of rowers tried to beat their rivals.