Home / What Was the Diet of the Pyramid Builders?

What Was the Diet of the Pyramid Builders? 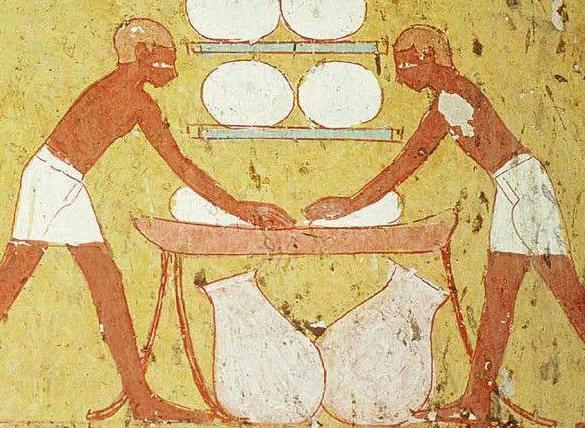 The pyramids and temples for which the Pharaonic civilization is known were not built by slaves, whose presence in the Nile Valley was practically anecdotal. On the contrary, they were erected by people who were at the service of the pharaoh and received a salary.

Just as soldiers or priests and other temple workers received. These salaries were paid in “rations” – the ancient Egyptians did not use money – specifically bread and beer, which made up the basic elements of their food.

The ration consisted of ten daily units. Thanks to the documents found in the Nubian fortress of Uronarti, we know that the soldiers who protected the southern border of Egypt received rations for weeks (the ancient Egyptians had ten days), and that their ration for such period was 60 units cooked from 2/3 heqat of northern barley (2.25 kg) and 70 units cooked from 1 heqat of wheat (3.75 kg).

These amounts would provide them with 2,136 calories a day, which were clearly insufficient. Therefore, cereals could only make up a part of their pay, to which rations of beer and some animal proteins had to be added, without which those men could not carry out their work of patrolling the desert.

The existence of these protein supplements is verified in the city of the Pyramid builders at Giza. There have been found, for the moment, about two hundred thousand bones and fragments belonging to fish, birds, and mammals. Of the latter, the least present is the pig and the most abundant, the young males of sheep, goats, and cows.

Although bakeries have been found in the city of the pyramid builders, the same does not happen with the stables, which is why housing and breeding were carried out elsewhere.

There were producing units, such as Kom el-Hisn, in the Delta, a population dedicated from the Old Kingdom to the breeding and fattening of cattle, which was then transferred to Giza for consumption.

Of course, in addition to this meat, they also received their rations of wheat and barley converted into bread and beer. Only this way, they reached the more than three thousand daily calories essential to carry out the heavy works that were required of them.

The extra rations for heavy work were something known, as we can see in the decoration of the tomb of Antefoker (Thebes, XII dynasty). Another way that Pharaoh had to pay wages was the distribution of temple offerings, made twice a day and very numerous. To get an idea of the volume, only the Mortuary temple of Neferirkare (V dynasty) needed 660 birds a month (8,000 a year) and 30 oxen a month (360 per year).

After spending a few hours on the altar and feeding the gods with their substance, the food was removed and distributed among all the temple workers, not just the priests.

Of course, following a strict scale, in which a priest received more parts than someone dedicated, perhaps, to skin oxen. This type of distribution was one of the basic exercises that a scribe had to learn, since the proper functioning of the Pharaonic administration depended on it.