Home / Who destroyed the Library of Alexandria? 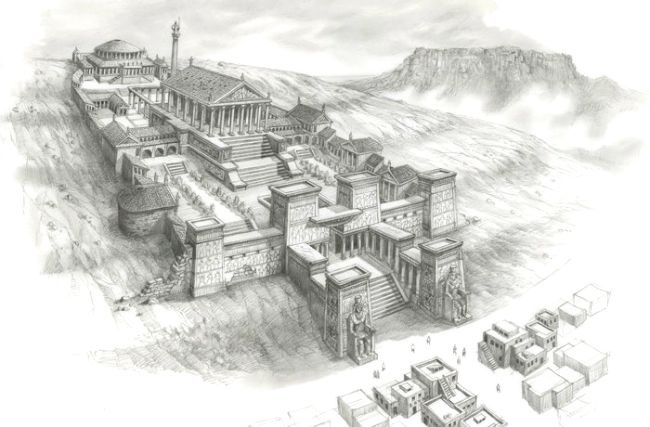 The Library of Alexandria was the cultural center which revolved the intellectual life of Hellenism. This institution gathered the largest collection of writings to date, as well as a large number of research instruments and documents from the ancient world.

In this way, the most important researchers of any subject should go to this place to deepen their studies and refine their knowledge.

It is, by all accounts, one of the greatest monuments to knowledge, whose splendor has impressed all civilizations throughout the ages.

The Library of Alexandria stands as one of the most important institutions created by the human being, due to its extraordinary congregation of wisdom.

In addition, the chronicle of the Library is a tour of the most decisive episodes in the history of this period that involves the most prominent political forces, empires and cultures of the moment. Royal District The Alexandria of Cleopatra

The creation of these institutions are due to the reign of the Ptolemies, which promoted such institutions dedicated to knowledge due to the interest to recognize their tradition and legitimacy in the Hellenic culture.

What was intended was to legitimize their political power with a cultural authority.

This led to the spread of culture, which was added to the large number of resources that kept and the attendance of prominent personalities in history, poetry, philosophy, philology, medicine and science of the time.

With the death of Cleopatra, the last queen of the Ptolemaic dynasty, the decline of the Library and the Museum began.

This process lasted until the fourth century AD. On the one hand, the deterioration was accentuated due to the political circumstances that took place in a city that no longer enjoyed the position of capital of the central State or independence.

On the other hand, after the annexation of Egypt to the Roman Empire by the Emperor Augustus, the library remained so many years because it still maintained the prestige of past times and was admired by the Romans as a remarkable monument.

Hipólito Escolar in his work “The Library of Alexandria” describes the episode in which the Library caught fire during the War of Alexandria in which Caesar burned his own ships of the port so that the Egyptians commanded by Aquilas could not seize them and use them in their favor.

This event may be true, it is plausible since the fire could be extended to land, but there is no conclusive data.

It is necessary to mention that in the work “Civil War” Julius Caesar does not allude to the fire of the Library, but to the burning of the boats.

Also, Horace in “The War of Alexandria” does not mention the burning of the books either, indeed, Horace speaks of the incombustibility of the stone buildings of the city. The burning of the boats of the port did not burn the Library.

It is Seneca in De Tranquillitate Animi (On the tranquility of the mind) who says that “forty thousand books burned in Alexandria” as a result of the war action.

It should be noted that Cicero, Strabo and Lucano mention nothing of the burning of books.

Subsequently, Plutarch in “Life of Caesar” declares that the fire spread from the boats to the Library.

Other authors who speak of the fire are Aulus Gellius, Dio Cassius and Ammianus Marcellinus, but with different versions.

The legend of the books burned in the War of Alexandria seems to be due to the end of the Ptolemaic dynasty, since the destruction of an institution so related to it represents the situation of its end.

Escolar assures that the fire did not affect the buildings of the Library and not even the books. In any case, some rolls deposited in the port were burned.

What is certain is that the end of the Hellenistic period meant a crisis for the Library and the Museum in keeping with the sociopolitical vicissitudes.

However, these institutions overcame the circumstances recovering such an outstanding activity as the previous one.

At that time, the emperors took the place of protectors and promoters of these emblematic venues, highlighting the help of the Emperor Hadrian. However, the economic support was decreasing with time.

The Library of Alexandria was losing its cultural centrality, and it deteriorated little by little because of various incidents that respond to the political conjunctures that followed one another. What happened to the great library of Alexandria?

Among the innumerable events that could affect it, the following stand out:

1- In the 2nd century Trajan violently suppressed a Jewish revolt against him.

2- In the second half of the third century there were struggles aggravated by political and military problems of the emperors and a bad economic circumstance.

3- In the year 265 of Mussius Aemilianus, prefect of Egypt, he proclaimed himself emperor and stopped transporting provisions to Rome.

Consequently, Emperor Gallienus seized the city by force. The violence used caused damage to it.

4- In the year 272 AD Alexandria was devastated, especially the main neighborhood, the one where the Library was located, by the forces of Valerian when recovering Alexandria from the Palmyrene Empire.

5- In the year 297 AD Diocletian, after an eight-month siege, returned to conquer the city that was in rebellion.

This incident supposed, according to Escolar, the great destruction of the main neighborhood that severely damaged the Library.

6- In the fourth century Constantine moved the capital to Byzantium and the Edict of Milan (313 AD) legalized Christianity, which was extended.

Constantinople acquired cultural hegemony and overshadowed the old Alexandria whose monuments were far from the beliefs of its inhabitants.

7- In this same century, after the expansion of Christianity by the Egyptian people, grew a national feeling (with a language of its own: the Coptic) that faced the pagan and the Greek, for them symbols of repressive power.

8- Between the years 375-395 Theodosius governed the empire and, by the Edict of Thessalonica (380 AD), the Nicene Christianity (opposed to Arianism) was elevated like official religion of the empire.

9- In the year 391, after prolonged tension and constant disturbances between Christians and pagans, Patriarch Theophilus acquired from the emperor an authorization for the destruction of the Serapeum, the great temple of the Ptolemaic dynasty.

10- Some people maintain, not without controversy, that the Library lasted until the conquest by the Muslims, who in the year 641 invaded Alexandria.

On the other hand, there are also those who affirm that at that time the Library no longer existed, since it was previously destroyed by military strife and religious fanaticism.

It is more than improbable that the library survived until the Muslim conquest and that, consequently, the supposed destruction on the part of the Muslims is no more than a legend.

It has not yet been possible to give a conclusive answer to what really happened with the Library of Alexandria.