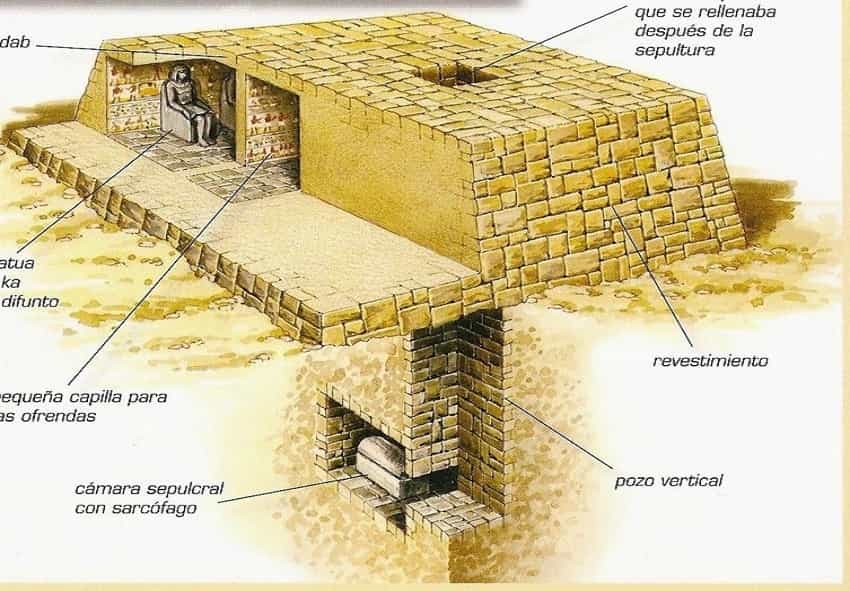 The mastaba (“pr-djt” in ancient Egyptian “house of stability” or “house of eternity”) is a type of ancient Egyptian tomb with a rectangular base, a flat roof, and sloping side walls built with adobe blocks (mud from the Nile River) or stone.

These buildings were the burial place of many ancient Egyptian personages during Egypt’s Archaic Period (Early Dynastic Period) and the Old Kingdom.

During the time of the Old Kingdom, the pharaohs began to be buried in pyramids instead of mastabas; although, they continued to be used for other characters for more than a thousand years.

The location of the tombs was very important since they had to be located out of reach of the Nile floods. They had to be in the desert, west of the river, where the sun set, which was where the deceased began their journey to the Beyond. According to their beliefs, the entrance to the underworld, or Duat, was located to the west, calling the spirits of the deceased “western”.

Mastabas were initially built with adobes (mud bricks) and later with stone, becoming widespread among the pharaohs and their main wives during the third dynasty after Imhotep erected the Saqqara funerary complex in stone for pharaoh Djoser.

The oldest were pits dug into the ground divided into several rooms with adobe walls. The central room was reserved for the deceased, and the funerary trousseau and provisions for the afterlife were placed in the others.

This construction has two levels: the underground with the burial chamber, which was accessed through long vertical shafts that were closed after the mummy was deposited, and the upper level where the chapel was, which imitated the house of the deceased where relatives could pass to deposit offerings. The eastern section contained one or several “false doors” decorated with reliefs, which served to indicate the spirit.

The most sumptuous had several richly decorated rooms and serdabs.

During ancient Egypt’s Saite period (twenty-sixth dynasty), mastabas lost their original form. They consisted of simple mud-brick constructions raised above the ground and did not have an underground chamber.

At this time, the mastabas sometimes contained a family pantheon, placing some tombs on top of others with an external staircase to reach the highest ones.

This curious arrangement was common in Lower Egypt to protect the corpses from the humidity of the floods.

There are thousands of mastabas in Egypt, many with interior chapels decorated with beautiful wall paintings. Unlike the Pyramid texts, which only contained formulas for the afterlife, these paintings provide an excellent source of information on everyday life.

The Egyptian pyramids developed as an evolution of the mastabas. The oldest, the Step Pyramid of Saqqara, was originally conceived as a single mastaba, but the architect Imhotep decided to superimpose another five, whose bases are progressively narrower.