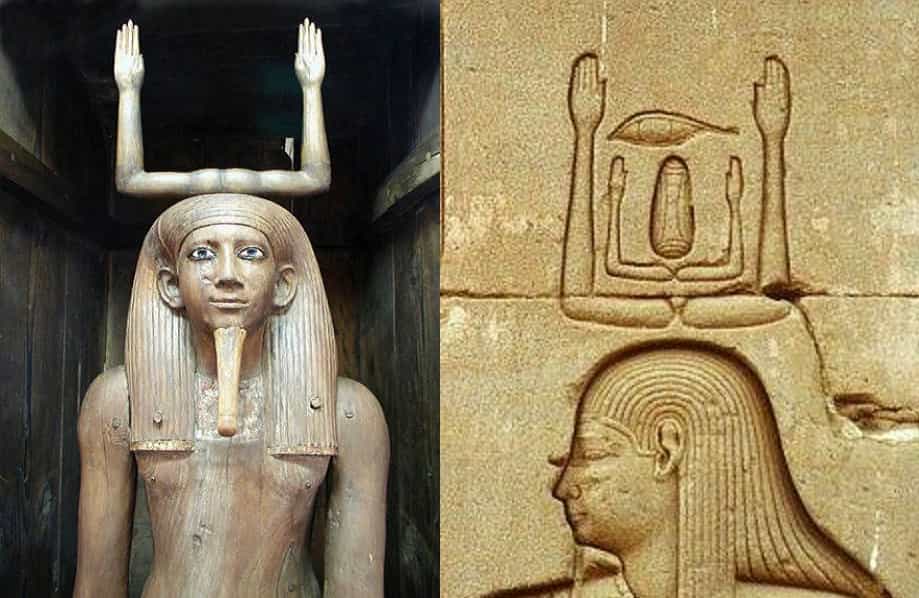 It was one of the concepts that formed man, most ancient Egyptian funerary texts reference numerous parts of the soul:

Ka was represented with two arms raised at right angles, with outstretched hands and palms up in an act of worship. The symbol may appear without any human or animal manifestation under it.

We are faced with an element that makes up the human being that is very difficult to translate because currently we do not have a similar concrete concept that serves to approximate what the ancient Egyptians understood as Ka.

It was translated by Gaston Maspero as “vital double”, although the term “double” has also been used, “twin”.

Traditionally it has been mistranslated as spirit, but this comparison is insufficient and problematic since the “Ka” is more of a force that gives life to the individual and is associated with the body temporarily, allowing the body to stay alive and the deceased to feed.

The Ka protects man while he lives and remains as protector after death, provided that specific rites are fulfilled, since it is linked to food.

In some contexts it seems to convey a sense of intellectual and spiritual power; it was not individual but constituted a common force in a family and passed down from father to son. In addition, the word Ka also served to designate the bull and the food.

As an element of the human being, it was born and created with the person. But curiously the Ka is also present in theoretically inanimate objects such as statues (as faithful representations of man) or food.

On the other hand the expression ( go to Ka ) it was an Egyptian idiomatic twist to express ( rebirth ) and die.

The Ka was invisible, it remained with the man until death occurred, after which time it was united with the divinity.

However, for it to survive, it needed to nourish itself with food and drinks that were offered by a clergy, the priests of the Ka, or by the supplies represented on the walls or offering tables located in the tombs as a magic talisman in case these offerings were not made on time.

The lack of this food caused the disappearance of the Ka and, therefore, the hope of life after death vanished. That is, as long as the Ka lived in eternity, the eternal life of the individual was guaranteed.

It is evident that the Ka did not nourish itself on the physical substance of food, but took its spiritual essence from it. Thus, the material support served to feed the priests in charge of their worship.