Home / Ancient Egyptian Mummy: The Man Behind the Mask 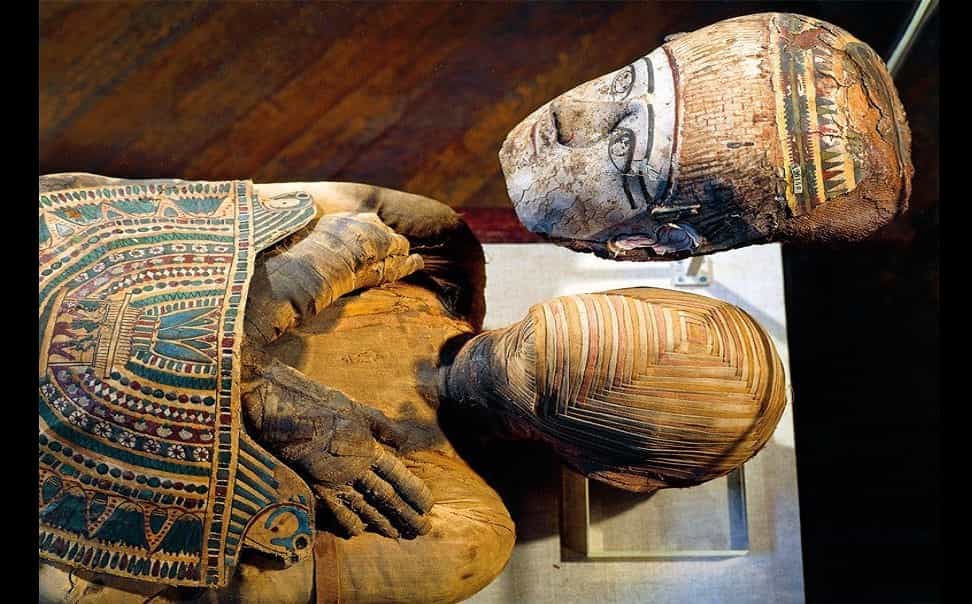 An ancient Egyptian mummy located in the Louvre Museum has been drawing attention from visitors due to its unique wrapping style. Unlike traditional mummies, which are typically wrapped in long strips of fabric, this particular mummy has an intricate interwoven square pattern on its face and a different wrapping style on the rest of its body.

The square pattern on the mummy’s face is made up of interwoven strips of linen, and underneath this, the body is well-preserved. According to the Louvre, x-rays have revealed that the mummy was an adult male who lived during the Ptolemaic Period (305 BC to 30 BC).

He was wealthy enough in his lifetime to afford the mummification process, which ensured his survival into the afterlife. The museum researchers are not sure of the man’s name, but they believe it to be either Pachery or Nenu.

The mummy’s cartonnage, which covers the rest of the body, features thick shoulders, a neckband draped over the chest, an ornamental apron across the legs, and a casing around the feet.

Cartonnage is a type of material used in ancient Egyptian funerary masks and decorations from 2181 BC to 400 AD. It is made of layers of linen or papyrus covered in plaster and then painted.

In addition to the mummy, the man’s main organs were preserved in jars, except for the heart and brain. The heart was left outside of the body and the jars because it was thought to embody the soul and needed to be accessible for passing into the realm of the dead.

“The brain was thought to be the origin of mucus, so it was reduced to liquid, removed with metal hooks, and discarded.”

This mummy serves as a glimpse into the ancient Egyptian beliefs about death and the afterlife, and the lengths to which they would go to ensure their journey into the next world.