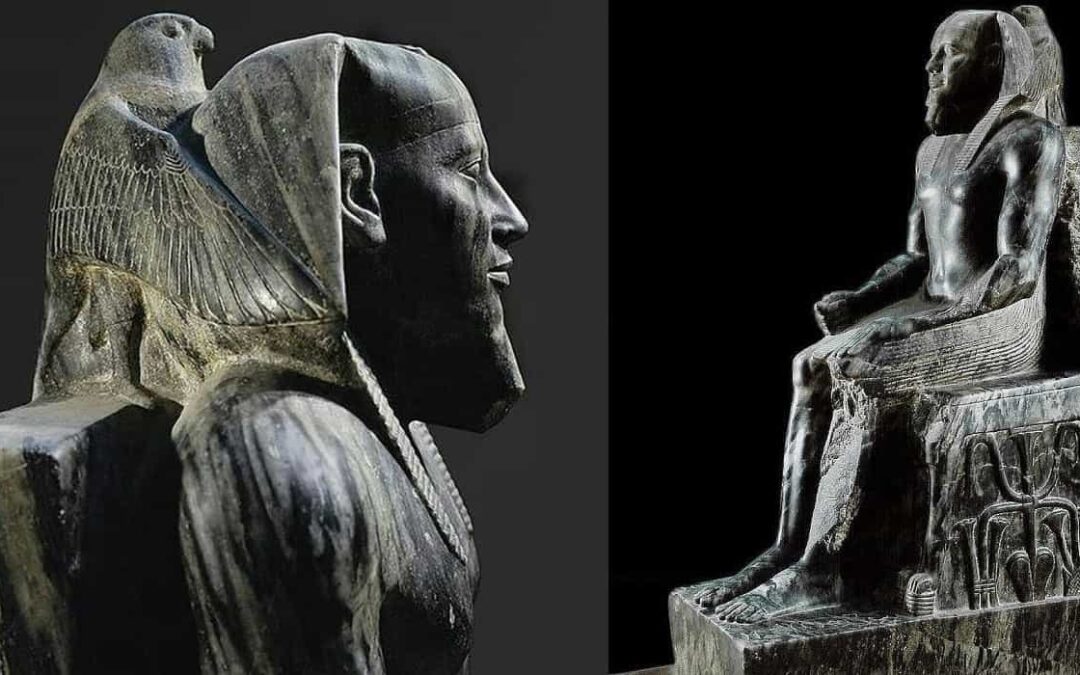 Khafre Enthroned, also known as the Seated Statue of Khafre, is a sculpture dating from approximately 2,550 BC to 2,480 BC, belonging to ancient Egyptian art.

Specifically, it was sculpted during the period corresponding to the Fourth dynasty of Ancient Egypt. It is considered one of the most important pieces of Old Kingdom art, as it exhibits all the characteristics of ancient Egyptian art.

Not only does it follow the archetypes of Ancient Egyptian royal statuary, but it also represents the symbolic characteristics attributed to the pharaoh (total authority and divine origin).

It was discovered in 1860 AD during archaeological excavations by French Egyptologist Auguste Mariette, within a tiled pit of the Valley Temple near Giza, Egypt.

Khafre was the fourth pharaoh of the Fourth Dynasty of ancient Egypt, ruling from approximately 2,547 BC to 2,521 BC. During his reign, he oversaw the construction of several notable buildings, including the Pyramid of Giza, the Great Sphinx of Giza, and an avenue connecting the pyramid to the religious complex associated with it. The avenue was lined with large granite monoliths and numerous sculptures of the pharaoh, which were sculpted in diorite.

The sculpture is 168 cm tall, 57 cm wide, and 96 cm long. It is made of green diorite and was created using incision and carving techniques.

It is a round, free-standing sculpture that represents the image of Pharaoh Khafre at life size and in a seated position. The pharaoh is depicted seated on a throne, with the back of the throne reaching the height of the pharaoh’s shoulders.

The image of the god Horus in the form of a falcon is also present on the throne, with outstretched wings and in a protective attitude, as he is embracing the head of the pharaoh.

The lower part of the throne is made up of four lion legs and there are two heads of these animals at both ends of the seat. The representative flowers of Upper and Lower Egypt (lotus and papyrus) are depicted on the sides of the throne, symbolizing the unification of Egypt.

The face is idealized with very defined features, such as almond-shaped eyes, a straight nose, and full lips. The arms are positioned close to the body, with the hands on the thighs.

The right hand is depicted closed in a fist, while the left hand is open, palm down. He is dressed in a pleated skirt tied at the waist that leaves his torso exposed, displaying his musculature.

He also wears the pharaonic headdress and false beard, both typical of Ancient Egyptian pharaohs. The legs are represented as rigid and the feet are bare.

The statue also complies with the law of frontality, with the representation of the god Horus being the only thing found on the back, and the rest of the statue is smooth and was likely sculpted to be seen from the front.

The pharaoh is represented with the total hieraticism and rigidity typical of Ancient Egyptian art. The lack of facial expression, only slightly attenuated by a slight smile, emphasizes the idea of an omnipotent and distant power that the pharaoh had.

In terms of preservation, the statue is in good condition, with only slight deterioration seen on the left leg. It is currently on display at the Egyptian Museum in Cairo, Egypt.