Home / Bahariya Oasis: The Fabulous Valley of the Golden Mummies

Bahariya Oasis: The Fabulous Valley of the Golden Mummies 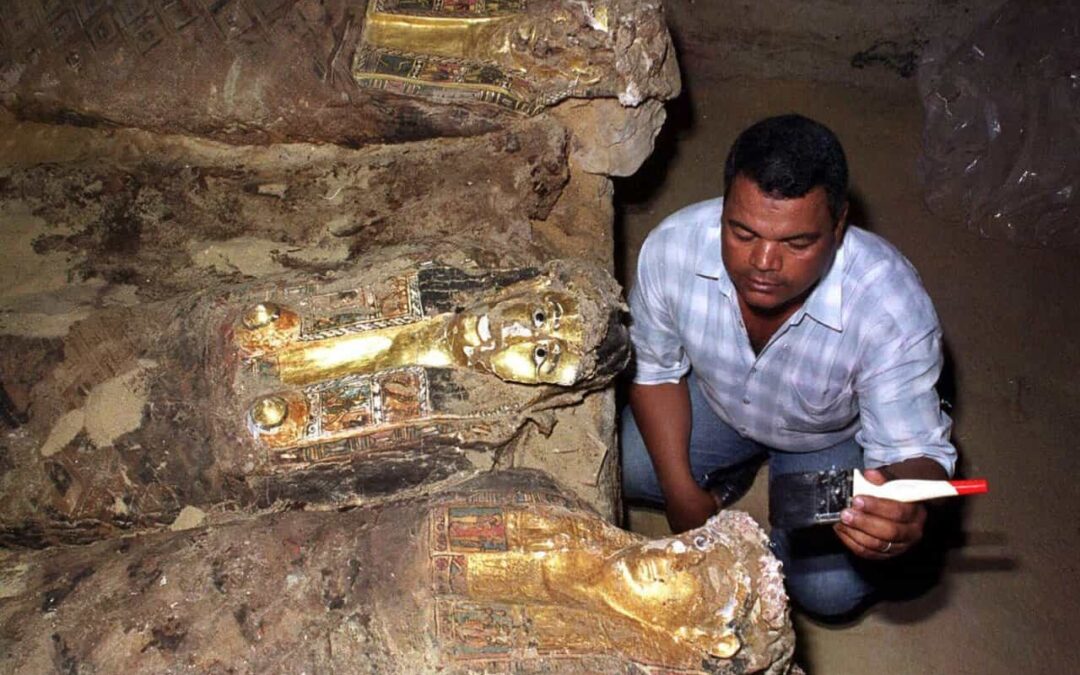 In 1996, Egyptologist Zahi Hawass noticed impressive flashes from the bottom of a hole in an oasis in Egypt’s desert. This led to the discovery of several tombs containing mummies from the Greco-Roman period; they all had incredible golden decorations.

The Valley of the Golden Mummies is located 15 minutes from El Bawiti, in the Bahariya Oasis, about 400 kilometers from Cairo.

Although there are traces of a Palaeolithic population in the area, it was during the Middle Kingdom that this green dot in the middle of the desert attracted the attention of the ancient Egyptian rulers. Trade routes and nomads converged there, becoming a defensive enclave of the western borders.

Bahariya flourished most especially from the 26th dynasty and after the arrival of Alexander the Great and the Ptolemies.

Most of the mummies discovered relate to the Greco-Roman period (between the 4th century BC and the 4th century AD) when the oasis served as a center for exporting wine to the rest of the Nile Valley.

The excavation led by Hawass discovered that the oasis’s population, mostly made up of artisans and merchants, had been buried in family pantheons that had accumulated mummies of men, women, and children of various ages over time. These are the Golden Mummies and are dressed splendidly in beautiful cartonnage and masks covered with fine layers of gold on stucco.

Mummification in the Greco-Roman era emphasized the mummy’s external appearance. The corpse, once emptied, was reinforced with sticks or reeds and covered with large amounts of resin.

“You could still smell the resin used,” Hawass notes, recalling the moment he entered the tombs. Later, they would wrap the mummy in a linen bandage formed of intricate geometric patterns that gave it a sense of depth.

Sometimes, the funerary mask was modeled with papyrus cardboard plastered and painted on the torso and face of the deceased. In the case of wealthy families, this was covered with fine layers of gold.

The decoration of the bandages and masks of the Bahariya mummies shows a striking combination of Egyptian and Greek elements.

Greco-Roman hairstyles were represented alongside images of ancient Egyptian gods, such as Isis, Anubis, and Horus. A female mummy found in a wooden sarcophagus had a stele at her feet that showed the deceased dressed in a Roman style and heading for the threshold of a door that would lead her to resurrection.

Some obsidian, marble, or glass plates were placed on the face of some mummies. These symbolized the eyes and eyelids and gave life to the gaze of the deceased.

Mummies belonging to the less favored classes of the oasis have been found in very poor states of preservation—they were wrapped carelessly during mummification and were not deposited inside any sarcophagus in the tombs.

Anthropomorphic sarcophagi made of terracotta have also been found, and sometimes poignant elements appear. For example, a female mummy whose face had been cast to the side so she could contemplate the mummy of her husband, lying next to her, who had died earlier.

Most of the tombs discovered have a similar structure. There are access steps leading to a small room where the body of the deceased was received.

Then, a small corridor leads to the lateral niches where the corpses were deposited. Here, there are tombs resembling a kind of catacomb where the mummies were simply piled up.

Some tombs show the god Anubis weighing the heart of the deceased alongside the feather of Maat before Osiris as decoration.

Statues of mourners and of the god Bes, protector of the home, have been found in grave goods such as offering vessels with remains of wine, food, and bronze, silver, copper, faience, and ivory jewelry.

Coins from the Greco-Roman period have also been found, one of them from the reign of the famous Cleopatra VII.

Among the most notable finds is the limestone sarcophagus that hid the mummy of Bahariya’s 26th dynasty governor, Djed-Khonsu-euf-Ankh, and the mummies of his wife Nesa II, his brother, and his father.

The tombs of Ta-Nefret-Bastet, Ped-Ashtar, and Thaty are from the same period and were looted during Roman times and were later reused.

The Valley of the Golden Mummies is one of the most important discoverable sites of Egypt’s Greco-Roman period, and its study is still far from over. In the words of Hawass, the excavation in the Bahariya area could last decades and is expected to discover more than 10,000 mummies during its course.

The Saqqara Bird: Did Ancient Egyptians Have Flying Machines?

Hemiunu, the Vizier of King Khufu