Home / The Battle of Kadesh: The First Peace Treaty 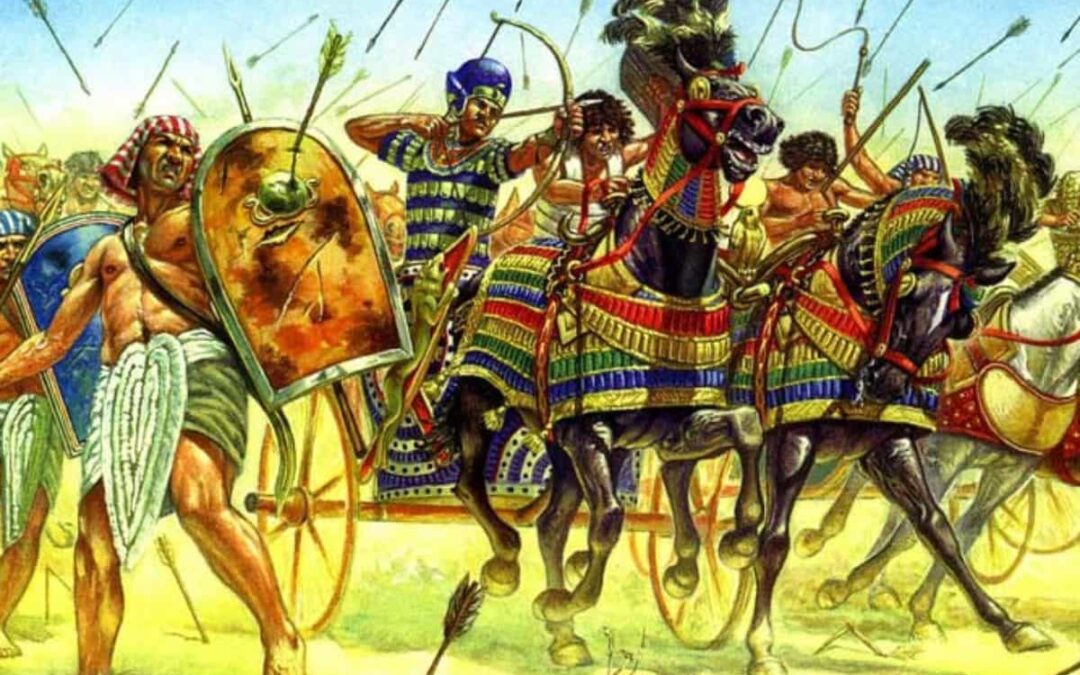 The Battle of Kadesh faced the armies of Ramses II of Egypt and Muwatalli II, king of the Hittite Empire, in 1274 BC, Kadesh, in what is now Syria.

1,200 BC is a time full of events as it marks the end of the Bronze Age, the fall of great empires and civilizations and the end of the ancient world known up to that time.

These changes of 1,200 BC have an important precedent in the best documented battle of antiquity, the last of great importance in the Bronze Age and the one that produced the first peace treaty in history: We refer to the Battle of Kadesh.

The Battle of Kadesh was the confrontation produced in 1274 BC, between the two great powers of the known world at that time: The Egyptian empire ruled by Ramses II, and the Hittite empire led by Muwatalli II.

Both empires had common borders and the Syrian territory of Kadesh was the bone of contention.

The region known today as Syria, was a very important place for both kingdoms if they wanted to consolidate their power. In this region the most important commercial caravans passed and its great and important resources made it a territory desired by both powers.

Such was the importance of this region that before Ramses II, Pharaoh Seti I, a few years earlier, had already entered these lands militarily, and had even been in the city of Kadesh.

Who were the Hittites who fought in the Battle of Kadesh?

We know a lot about the Egyptian empire thanks to its papyri, ancient cities, the beautiful pyramids and its great temples full of hieroglyphics.

However, the Hittite civilization was forgotten after they were the victim of the change in the order of the ancient world that occurred after 1,200 BC, and their confrontations with the Assyrians.

The Hittites settled in the region of Anatolia, in present-day Turkey. It is not known how they called themselves, since the name Hitta comes from the inscriptions that Egyptians and Assyrians made of this civilization, therefore, when its capital Hattusa was discovered in the 19th century and after subsequent analysis, it was concluded that these places were part of the empire known as Hittite.

Not much data is known about them, but it is thought that they could be Indo-European thanks to various characteristics that they possess both in their writing and in the use of certain instruments such as war chariots.

Besides this they were known for their military power, but especially, for their diplomatic skills and knowledge of the use of iron, the secret of which they jealously guarded for a long time.

The battle of Qadesh, the great conflict of the ancient world

What was the Battle of Kadesh?

The Battle of Qadesh faced the armies of Ramses II of Egypt and Muwatalli II, king of the Hittite Empire, in 1274 BC, Kadesh, in what is now Syria.

For a long time the tension between the two empires was palpable on their borders, but there were no episodes that reached the level of a warlike conflict, in addition to the fact that between both civilizations there were several agreements that avoided all kinds of confrontation.

The confrontation of the Battle of Kadesh

Egyptian sources are the ones that most refer to the facts of the battle and from which some important facts are known.

The struggle between the Hittites and the great pharaoh Ramses II is considered -usually- as the war episode that had a greater number of battle chariots and that ended with the incontestable victory of the Egyptian king.

When both sides decided that their differences would be settled on the battlefield, Pharaoh Ramses II left his capital, Pi-Ramesses, for the city of Kadesh, accompanied by four divisions that had names of Egyptian gods: Amun, Ra, Ptah and Seth, being led by Ramses II himself, who was in charge of the Amun division.

For a month they marched until they reached the city of Kadesh, where the battle between the two empires would take place.

Kadesh was not unknown to Ramses. Probably while still crown prince, he accompanied his father in the campaign that ended with the taking of the city, which Seti I seized from Muwatalli himself.

The chariots and the Hittite infantry and their allies camped on the eastern bank of the Orontes, hiding behind Kadesh. Amun’s division, led by the Pharaoh, was the first to arrive and set up camp to the northwest of the city.

When the Egyptian forces were still organizing, the Hittite attack occurred. These first charged as the second division passed and from there they stormed the camp.

After a desperate reaction, probably led by Ramses himself, the Egyptians forced the rival to retreat. The next day, after a morning combat, an armistice was decided.

However, from the 10th year of his reign there are no more campaigns in Asia. Apparently, the Kadesh episode opened a period of diplomatic relations fostered by the Hittites.

Ramses received an offer of peace, but not from Muwattali, who died around that year 10, but from his brother Hattusili III. The reason was probably the delicate internal and external situation the kingdom was going through.

The need to justify his accession to the throne, achieved through a coup against his nephew, and to defend himself against the rise of Assyria as the new power in the area forced him to strengthen alliances with his neighbors.

Hattusili wanted to secure the friendship and support of Egypt, and offered Ramses a peace proposal in the form of a bilateral treaty..

Finally, in the year 21, a Hittite delegation arrived in Pi-Ramesses, who gave the pharaoh a silver tablet with the treaty signed by Hattusili III. Egypt ratified it. They made a copy, also in silver, signed by Ramses and sent it to the Hittite court.

Peace and brotherhood are the two words that define the new relationship between the two countries. This treaty is the first international agreement, in terms of parity and reciprocity between two great powers, that has been preserved, and lays the foundations of international law.

The preamble, with the name of the “signatories”, is followed by a series of clauses whose content is very topical.

The parties agree to a non-aggression pact. Previous treaties are confirmed. In the event of aggression by an enemy country or an internal revolt, the other party agrees to send support troops.

As is customary at this time, the gods of both countries guarantee the pact, punishing those who violate it and rewarding those who fulfill it.

It was a triumph for both rulers, who recognized themselves as “great kings” brothers and extended peace to their children’s children until eternity. The alliance was sealed with a diplomatic marriage.