Home / The luck of being a scribe in ancient Egypt: The Satire of the Trades 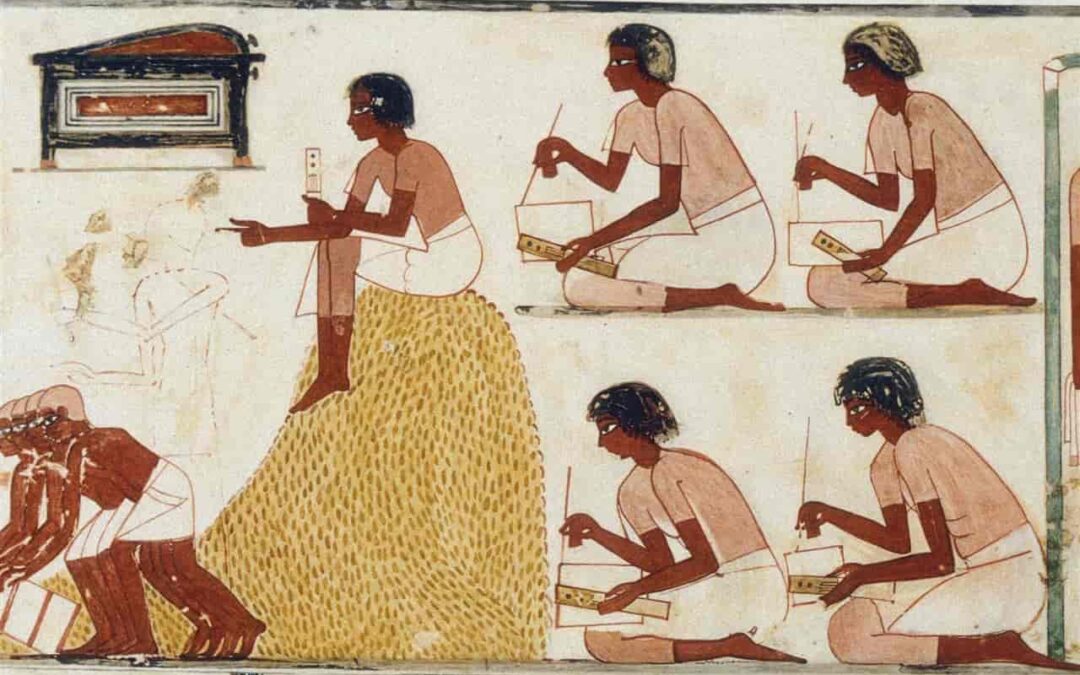 In ancient Egypt, several texts emerged, such as the one that concerns us here, which are part of a type of literature known as “wisdom”, in which a parent or guardian offers his or her pupil certain advice to behave and succeed in life.

There, the young man will receive a magnificent education that will allow him to have a splendid future. But the kid doesn’t seem very happy.

The truth is that the idea of ​​studying complicated hieroglyphs and sitting cross-legged all day writing on tablets, ostraca and papyrus does not seem to appeal to him too much.

Along the way, the father, aware of this, will try to make him see the advantages of the profession of scribe over the others, all in a satirical tone not without humor.

Have you seen the blacksmith?

“Look, there is nothing better than books; They are like a boat on water … I am going to make you love the writings more than your mother, I am going to present their kindness to you. It is bigger than any other function; there is no equal on earth … ”.

Dua-Kheti praises in this way before his reticent son the wonders of being a scribe and for this he will despise (in a totally exaggerated way?) the other trades, especially those of a manual nature.

Has young Pepi seen how a blacksmith lives?

“I have seen the blacksmith at work, at the mouth of his furnace. His fingers are like crocodile claws” says Dua-Kheti. The boy cannot avoid a gesture of disgust, but his father continues to describe the harshness of the other trades:

“The barber is shaving until the end of the afternoon … He has to go from street to street looking for someone to shave … . the potter is already underground but is still among the living. His clothes are stiff with mud, his belt is in tatters. The air that enters his nose comes straight out of the oven … ”.

But what about the professions that seem much more appreciative like gardener, hunter or fisherman? Pepi believes they may be more interesting.

But his father is going to disappoint him: “The bird hunter suffers while looking for birds. I will also tell you about the fisherman. It is more miserable than any other profession. He works in the river mixed with the crocodiles…”.

Yeah, but what about the gardener? Asks Pepi. Being surrounded by trees and plants all day must be beautiful …

Nothing could be further from the truth according to Dua-Kheti since “In the morning he waters the plants; He spends the afternoon tending to the vegetables, while at noon he is busy in the garden. He works until he dies, more than in any other profession ”.

If you know the script you will be fine

In the end, more satisfied with his future, Pepi will hear from his father a series of advice on how to proceed to be successful in what will be his profession for the rest of his life:

“If you know writing, you will do better than in the professions that I have presented to you. Look at them in their misery … I am also going to tell you other things to teach you knowledge:

If a dispute arises, do not approach the contenders; If you march after the magistrates, go the right distance; If you go in and the lord of the house is busy … sit with your hand in your mouth …

Beware of rushing to the table. Be serious and have dignity. Do not talk about secret things … Look, it is good that you are sent to listen frequently to the words of the magistrates.

Heed these advice that I have put before you, your children and their children…

Surely Pepi would be fully convinced by hearing his father’s words and would become a good scribe, would have a full life and would not lack for anything, as well as his descendants.

This type of wisdom and didactic texts were very common in ancient Egypt and offer us a splendid panorama of the Egyptian society of the Middle Kingdom, of the importance that scribes and officials played in it, and also allow us to take a look at the various craft and manual professions that shaped economic activity in the Nile country four thousand years ago.

The “Satire of the Trades” emerged during the Twelfth Dynasty, at the height of the Middle Kingdom.

Possibly it was a propaganda text whose intention was to support the great administrative reform that was launched during that period, one of whose priorities was the creation of a powerful body of officials composed of a very well prepared army of scribes that would act as the Pharaoh’s right hand and eyes.