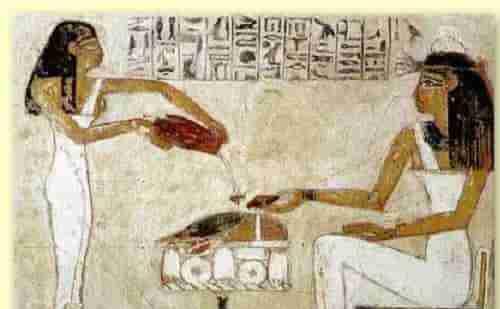 Basically, the data we have today on how the ancient Egyptians fed came from the texts that were engraved by themselves on the walls of their graves and temples, as well as the remains that have endured from their offerings to the deceased that make up a unique testimony on their way of feeding.

In this sense, it should be remembered that funerary art recalls everyday life and, as part of it, there are many recipes for cooking and culinary customs that we can find there described.

In the same way, it is also very common to find figurines made in clays (called “ushabtis”) that show us the servants of the deceased doing their job: grinding the grain, preparing the bread, roasting the food or serving drinks.

With regard to this last matter, it should be noted that for a long time beer was the authentic national drink of the country.

Unlike wine, which was considered a luxury product in the country (just as it is done today, in Ancient Egypt it was also bottled indicating its origin, the year of harvest and even the name of the winegrower), the beer was abundant and cheap.

It drank anytime, anywhere: on ships, in the countryside, at official receptions and, obviously, in the beer houses that existed in every city.

We can find the manufacturing process that was followed to get it in various mastabas from the time of the Old Kingdom and, in this regard, we know that this process included both the use of wheat or barley, as well as dates: its sugar ensured that the Drink ferment properly.

Beer, its importance in ancient Egypt

During the reign of the pharaohs, this drink was considered a food and not an alcoholic beverage, as we currently conceive it. Its invention is attributed to none other than Osiris, the son of Nut, Lord of Abydos and Busiris, god and judge of the dead, being therefore the spirit of cereals, which made them germinate and regenerate annually in the mud of the Nile.

Today you can see many documents that tell us about the different types and qualities of beer, the oldest being that of the Pyramid of Unas, of the V Dynasty, that is, more than 4,500 years ago.

In it we find the so-called “tnm”, but throughout the development of the next twenty-five Dynasties described by the priest Manetón, reviews of up to seventeen types of beer have been found and it is believed that more classes may have existed.

There were thick beers, milkshakes, strong, made with barley from Upper or Lower Egypt, sweet, salty, with dates, among many others.

In some tombs, including that of Amenhotep II, the complete elaboration cycle is explained, from the collection of the cereal, the preparation of bread cakes, the malting, kneading and filtering, guarding, transporting barrels in boats and the parties where it tasted.

Contrary to what is generally believed, the main raw material was not barley but a kind of red wheat called “Spelt” (triticum dicoccum) that has two grains in each spikelet, originally, possibly from Palestine.

Within the social sphere, those of the lower class could acquire the most common, a thick and cloudy liquid, without great alcoholic content, with little carbonic gas; while the upper classes took the most elaborate and mixed with aromatic substances.

Of course, beer was not only purchased for personal consumption but also used in funeral offerings where the deceased was usually promised breads that would not crumble and beer that would not sour.

It also served as a healing element, as medicine, and also as a currency to trade.

Perhaps it is in Ty’s grave where one of the most complete formulas for brewing is found, which began with the process of germinating cereal grains (usually wheat, barley or millet) by humidification.

From this initial phase, a tablet indicating how to proceed is preserved in the National Museum of Cairo written in hieroglyph:

“You have to let macerate and inflate the barley grains for a day in clear water. Then, you have to moisten them with water and drain them in a container or tray with holes in its base. Then it dries and inflates to the sun.”

“The sprouted grains of barley and spelled are crushed in a mortar, and with their flour, breads are made, once baked they leave something wet inside and once cold, they are chopped into jugs with water and sugar.

Then, the yeast is added and when the fermentation ends, it is racked in a bowl, diluted and sifted several times squeezing the dough and keeping the final liquid in amphorae and stored in fresh caves”.

The sugar to which it refers, since the ancient Egyptians do not know cane or beet sugar, is the natural sugar produced by dates or honey, either extracted or directly as raw materials.

The rules of beer making were very strict and were governed very closely in each province of ancient Egypt by each monarch or prince, who in turn directly accounted for the administration of the pharaoh.

Once elaborated, the jar was sealed with cooked clay, to certify the quality and authenticity of the beer by means of a hieroglyphic inscription on the lid of the container, which was not touched until the operation of “opening the jar” to avoid mixing.

All of this is closely monitored by the strict rules of each brewer.

Visit to the Temple of Hathor, Goddess of Love