Home / The Magical Pyramid of Unas at Saqqara 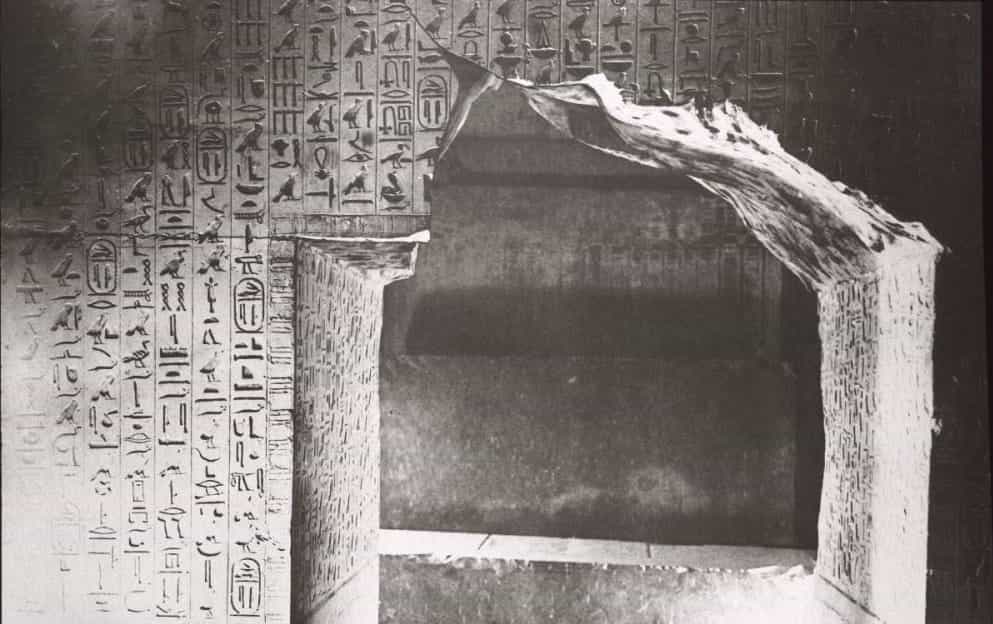 The pyramid of Unas, the last pharaoh of the Fifth Dynasty, is located in Saqqara, between the enclosure of Djoser and that of Sekhemkhet.

The pyramid is full of funerary texts, known as “The Pyramid Texts“. It was the first pyramid in which these types of texts were inscribed that tried to help the pharaoh in the world of the Hereafter.

The pyramid is accessed through an entrance on the north side, hidden by a chapel, in which a descending corridor of 14.5 meters in length opens, with a very steep incline (22º), which ends in a vestibule (4 x 2.47 , h = 2) that gives access to another corridor (14 meters) with 3 granite doors.

Behind this is a limestone antechamber that communicates on one side with the serdab, where there are 3 niches, and on the other with the burial chamber, a room measuring 7.3 x 3.15 meters, decorated with stars, in which is the sarcophagus, clad in alabaster, with black and green grooves.

The pyramid of perfect type, it was built with a stepped core and clad after limestone. The cladding has now disappeared.

The enclosure included the funerary temple, located on the eastern side of the pyramid, currently very deteriorated.

To the east of the temple was the avenue that linked the valley temple to the pyramid. The avenue measured 700 meters, with a width of 6.7 and contained a 2.6-meter carriageway with 3.1-meter-high walls that supported the roof.

It was built with white limestone and the ceiling painted blue with yellow stars and decorated with reliefs, among which those referring to the transport of columns and architraves from the granite quarries of Aswan for construction work stand out.

In addition, there are scenes of military life of the pharaoh and representations of animals, among which appears the image of a giraffe, an animal not represented until that moment in any other construction.

On its southern face there is an inscription, discovered by Lauer in 1957, of Khaemweset, son of Ramses II, which recalls the reconstruction that he carried out at that time.

The inscription reads “he perpetuated the name of Unas after not finding it on any of the faces of the pyramid, because he finds pleasure in restoring the ruins of the monuments of ancient kings of Upper and Lower Egypt”.

The Egyptologists John Shae Perring and Karl Richard Lepsius were the first to study the pyramid, but it was Gaston Maspero who first entered his chambers in 1881, and found texts on the walls of the burial chambers.

These writings, along with others found in nearby pyramids of later pharaohs, are known today as the Pyramid Texts. Unas was the first pharaoh to include these texts, and he created the concept of adding magical incantations as inscriptions on the walls of his tomb, with the aim of assisting the pharaoh on his journey through the “Duat” and into the afterlife.

This concept is believed to have been so successful among the pharaohs that it led to the creation of the Sarcophagus Texts in the Middle Kingdom of Egypt and later the Book of the Dead from the early New Kingdom to the late Hellenistic period.

The remains of a mummy, including its skull, right arm and tibia, were found in the main burial chamber, but it is not known for sure whether it belonged to Unas.

Near the main pyramid, to the northeast, are mastabas containing the remains of the pharaoh’s consorts.