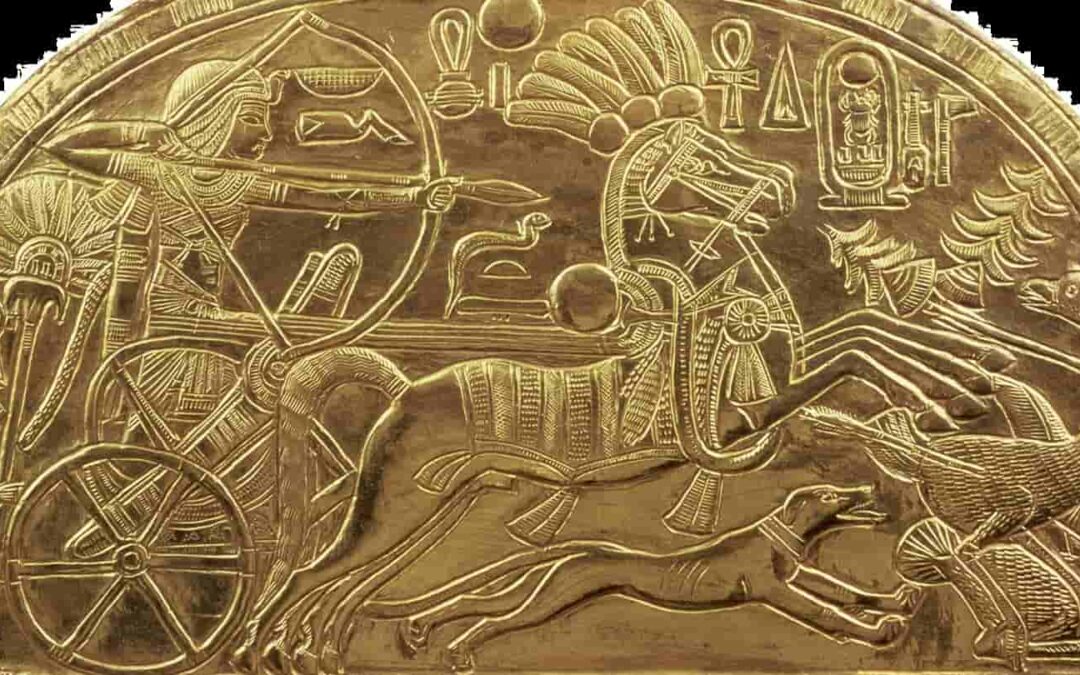 Dogs, cats and monkeys were so prized by the Egyptians that upon their death they were mummified and buried with their masters.

The ancient Egyptians stood out for having numerous pets and for the particular affection they felt for them. The famous Greek historian Herodotus of Halicarnassus, who visited Egypt in the middle of the 5th century BC, stressed that “domestic animals were abundant” and gave testimony of the great desolation that the death of a pet produced among the inhabitants of the house:

“They plucked their eyebrows in distress when their cat died, and they shaved the entire body, including the head, if it was a dog that died”.

It is not surprising, therefore, that since the Old Kingdom (2686-2173 BC) the ancient Egyptians were represented with their pets on the walls of their tombs, on funerary stelae and on sarcophagi.

The magical and religious power that was attributed to the image in Pharaonic Egypt (whether in the form of sculpture, relief or painting) ensured that the owner and the animal that he wanted, thus represented, continued to enjoy each other’s company in the Hereafter.

Thanks to these images we can learn many details about the presence of pets in the daily life of the ancient Egyptians, about the characteristics of the species and races of the fauna that then lived next to the Nile, about the domestication of animals and about veterinary practices.

Best friend of the ancient Egyptian

The pets of the ancient Egyptians were basically three: dogs, cats and monkeys.

Ancient Egyptian artists painted graceful dogs of different species and breeds on the walls of the tombs, sparing no details: some had a uniform coat, others were spotted; Some had large, drooping ears, and others pointed and straight; there were sheepdogs and watchdogs; some were small, and others were energetic and fierce like the hound, a hunting dog that we recognize by its long snout, long, thin legs, and curved tail.

In some hunting scenes in the desert, men armed with bows and arrows are represented who, with the help of hounds, hunt lions, oryx (large antelope) and other animals.

The domesticated dog entered the house and walked freely throughout it, accommodating itself under the chairs to eat, sleep or rest near its caregivers.

Images have come to us in which dogs appear adorned with beautiful collars and thin leashes that their owners hold, or that are tied to a tree.

However, it is curious that Egyptian artists never depicted man or woman stroking dogs, brushing their hair, or simply playing with them.

The cat, which the ancient Egyptians called miu, was domesticated from the Middle Kingdom (from 2040 BC). This feline was an effective hunter of mice, snakes and other unwanted animals in homes and barns.

For this he won the affection and sympathy of the peasants, and became one more guest of the house. Cats allowed a collar or a beautiful neckband to be put on them and agreed, perhaps a bit reluctantly, to remain motionless under their masters’ chairs while they enjoyed an appetizing feast.

Starting in the New Kingdom (1552 BC), the cat is represented on the walls of the tombs of its owners with greater frequency. Judging by the images, this animal became the favorite pet of some royals, such as Queen Tiye, Princess Sitamun or Prince Thutmose, the first-born of Amenhotep III.

He had a magnificent stone sarcophagus made with beautiful reliefs and inscriptions for his beloved cat Tamit.

Also the monkey (in ancient Egyptian ky) and the baboon (ian) were raised as domestic animals. In the decorative repertoire of the tombs, we find them climbing palm and fig trees to help collect the fruits that were higher.

They are also represented under the chair of their owners, often adorned with necklaces and bracelets. Since the Old Kingdom, the monkey won the affection of man and had access to the house, where it lived with the dog and the rest of the domestic animals. It amused people with its gestures and acrobatics, and, in short, it knew how to make time pass in a pleasant way.

In some market scenes, or in others where a lot of people congregate, the monkeys appear tied with straps, as if they were patrolling alongside the special police force, the Medyais.

Pets for the Hereafter

Pets lived close to their masters, inside houses. They received all kinds of care during their lives and when they died they were painstakingly mummified.

The corpse of the animal was placed on a special embalming table to eviscerate it, that is, to extract its internal organs, which was done through an incision made in the side.

Once extracted, the viscera were cleaned and rinsed with aromatic substances, and they were placed back inside the abdominal cavity.

Previously, the body of the animal had been desiccated with natron (a type of salt) and filled with myrrh, cinnamon and other products.

Immediately afterwards, ointments based on resins, gums and perfumed oils were applied and the body was wrapped with linen bandages. Once the process was finished, the embalmed pet was placed inside a coffin or sarcophagus and buried close to its owners.

Since the cost of embalming was considerable, the fact that a pet was mummified indicated that it had been extremely important to its owner.

The attachment and affection that the Egyptians showed towards their domestic animals not only led them to represent them in a multitude of circumstances and places, but also to bury them in their own tombs.

Some ancient Egyptian took this custom even further and introduced the mummy of his most beloved animal inside his own sarcophagus:

Carefully mummified dogs have been found curled up at the feet of their masters. Perhaps in life the pet and its owner slept together and the owner wanted to continue to do so during his afterlife.

The study of the mummies of the companion animals indicates that they received careful care during their earthly lives: shiny hair and strong bones reveal a continuous, healthy and balanced diet.

One of the finest and most delicate pet mummies that have survived is that of a gazelle that apparently belonged to Princess Isitemkheb or another member of the family of Pharaoh Pinedjem, of the 21st dynasty (who died around 969 BC).

Examination of this animal has revealed that it was about a four-year-old female who died of natural causes. The gazelle was carefully bandaged with strips of linen and adorned with various necklaces ; its mummy was inside a sarcophagus made of sycamore wood that took the shape of the animal.