Home / Why Were Cats So Important In Ancient Egypt?

Why Were Cats So Important In Ancient Egypt? 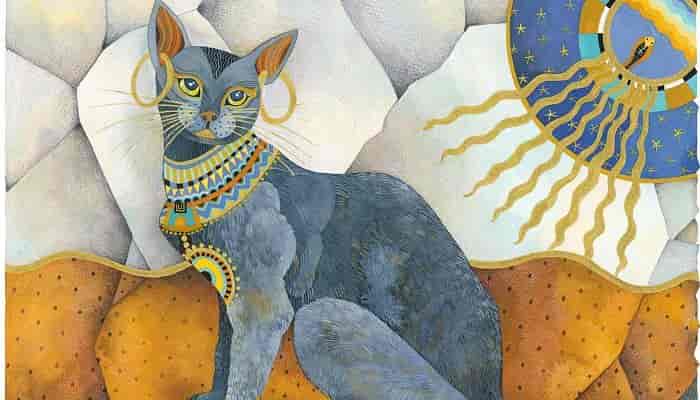 On many occasions we have observed that cats in ancient Egypt, specifically in the New Kingdom (1550-1069 BC), were animals venerated by the inhabitants themselves.

This arises for two reasons: the first, due to the worship of the gods. The second, the cat as a domestic animal, both connected to each other.

Starting with the first, we find the gods Ra and Bastet. In the ancient Egyptian religion, Bastet is the personification of the warm rays of the sun.

She is represented as a woman with a cat’s head or an entire cat and defended Ra, god of the Sun, against the attacks of the Apophis snake.

A very clear example of this scene is found in the tomb of Inherkhau. It is necessary to mention that also Ra, in some old myths, adopted the form of cat to descend to earth.

In the New Kingdom, the cat was considered an incarnation of the Sun god and the manifestation of the goddess Bastet. The ancient Egyptians sought to seek the happiness of the goddess, who symbolized the power of the sun, the protection of the home and the joy of living.

This brings us to the second reason, what did the cats in ancient Egypt do?

It is believed that domestication began during the 3rd millennium B C. The cat became a companion animal appreciated for its sweetness, charm, its mysterious behavior, and above all, for being protective of the home.

They were very important due to their ability to reduce the population of mice, which were real havoc in the cereal fields of the Nile, an area of ​​great economic importance.

In addition, cats in ancient Egypt kept the houses clean because when hunting rats and snakes, a carrier of serious diseases was eliminated, as the plague and the surroundings of nearby homes were safer.

The cat achieved an importance that was increasing over the years, both religiously and socially. In the New Kingdom, the cat is trained to take it to bird hunting.

The ancient Egyptians had great respect for their cats’ lives. The members of the family held a funeral when their cat died. They shaved their eyebrows as a sign of affliction and mourning, and if they had the necessary resources, the cat was embalmed in a special sarcophagus.

The cat was transported to the city of Bubastis, to be buried with solemnity and figures in the shape of a cat were placed as an offering to obtain the favor of the goddess Bastet.

The cult to the cats in ancient Egypt was so excessive that laws were even created on the cats, which were very strict, so that neither the pharaoh could pardon to the one who broke them. This can be seen in texts by some Greek historians.

Diodorus Siculus tells how the crowd of Alexandria was launched against a Roman citizen who had accidentally killed a cat and asked for the death penalty for him.

Herodotus explains anecdotes in case of fire and the laws applied to cats:

“When a fire is declared, it’s amazing what happens with cats, people stay at a certain distance taking care of the cats and without worrying in the least to put out the fire, but the cats slip through the crowd or jump over their heads and rush into the fire, and when this happens, the Egyptians get very sorry”

“If someone voluntarily kills one of these animals, he is condemned to death and if he does so involuntarily, he pays a fine fixed in each case by the priests …”

Ctesias speaks of the Battle of Pelusium (525 BC), in which the Persian king Cambyses II and the pharaoh of Egypt, Psametik III, fought. It is said that the Persians devised a stratagem to defeat using on their shields representations of the goddess Bastet and capturing cats to release them during the battle and make the Egyptians fight carefully so as not to harm the cats.

After the battle, the Egyptians took refuge in Pelusio. When they besieged the city, Cambyses II continued to use the felines in his favor. The soldiers threw the cats towards the fortress and forced the Egyptian archers to shoot with caution.

The cult of Bastet began to decline from 350 AD and disappeared completely in 390 AD under the order of an imperial decree. There are, however, many mural paintings that relate the different stages of cat life in ancient Egyptian society.

In 1890 in the Egyptian village of Tell-Basta, the ancient Bubastis, archaeologists discovered an ancient cemetery in which three hundred thousand mummies of mummified cats were counted and placed each in a small coffin that represented the shape of the animal.

Apparently, the priests got to mount a lucrative business around the sale of mummified cats, since many inhabitants considered an honor to be buried next to mummified cats, even the pharaohs.

Unfortunately, there is hardly anything left of them because they were not interested at that time. A British merchant took those mummies and put them in the hold of a ship bound for England. He crushed them and sold them as fertilizer to farmers in the port of Liverpool. Only a few were saved from that.

The Secret of the Ankh