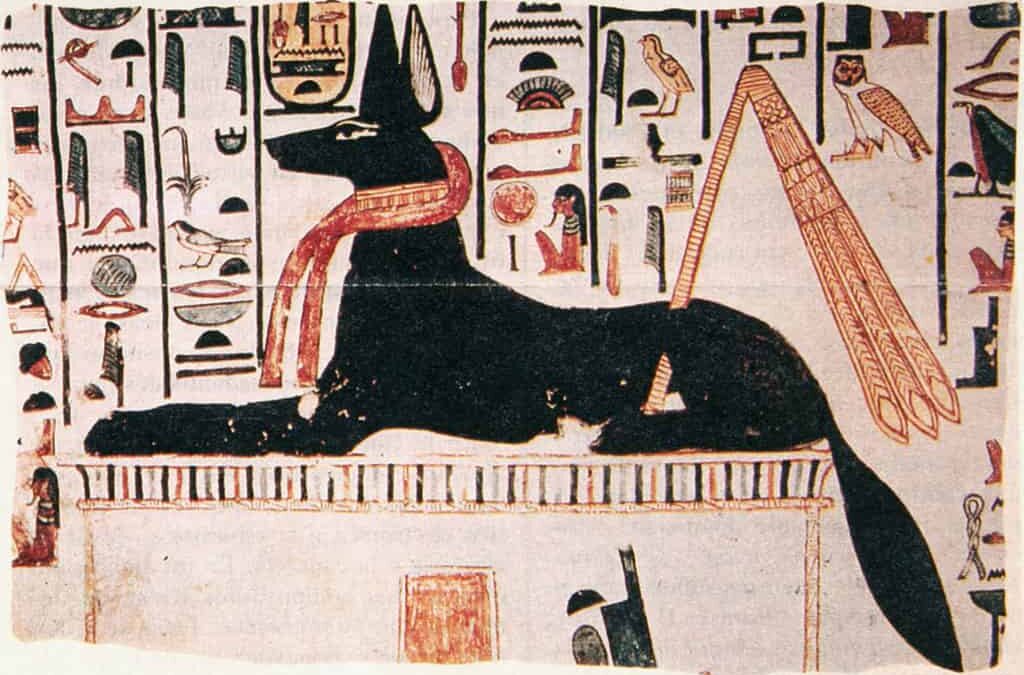 Numerous works of art and hieroglyphics reveal how dogs participated in the daily and sacred life of the ancient Egyptians.

Evidence abounds from grave paintings, artwork and writings reflecting how people, at all levels of society, protected and loved dogs, considering them companions and members of the family.

Hand mirrors, with wood and ivory frames –belonging to the New Kingdom (1500 to 1800 BC)-, represent young women holding a duck, a cat or a puppy in their arms.

In the mural paintings of numerous tombs, the deceased is shown in actions from his life, accompanied by his dog, sometimes lying under the seat of the master, sometimes assisting him during a hunt.

From the tombs, in the Valley of the Kings, leather canine collars painted pink, green and white, with metallic appliques in the form of jumping horses, were obtained (These pieces are exhibited in the Cairo museum).

“Great honors were paid to the dog”, wrote the Greek biographer and philosopher Plutarch (46-120 BC), who pointed out that the death of a pet – bird, cat or dog – “produced a great commotion”:

“The members of the the family shaved their bodies and heads in order to calm their sorrow,” he explained.

Preparations for the burial of a family dog ​​were similar to those of humans; and in wealthy classes, the ceremony involved costly and elaborate rites.

A papyrus reports that in times of the Old Kingdom (2680-2180 BC), a hunting dog named Abutin – the name means “pointed ears” – was deeply loved by his owner, pharaoh and, before anything else, man; when the animal died, he ordered that the coffin be included in the royal treasure, be mummified and bandaged with ribbons of the finest linen.

Those dear companions received the best food, were bathed and brushed -as the paintings show-, had affectionate names that often include the word abu (“revered”, “beloved”, and “father”), the word ubis ( “protector”), or hhi (“mine”).

Archaeologists have translated nearly eighty dog ​​names; some allude to the personality, work or talent of the dog, such as “Faithful”, “Good Shepherd” and “Sword”; others, to his physical characteristics or fur, calling him “Formed as an arrow”, or “Ebony”.

A New Kingdom frieze reads: “The dog obeys the words and follows his master.”

The ancient Egyptians had playgrounds for their dogs, where the handlers released them so that, in a preparatory game, they found and brought baits made of rabbit or antelope skin.

An Egyptian spell to get the desired man