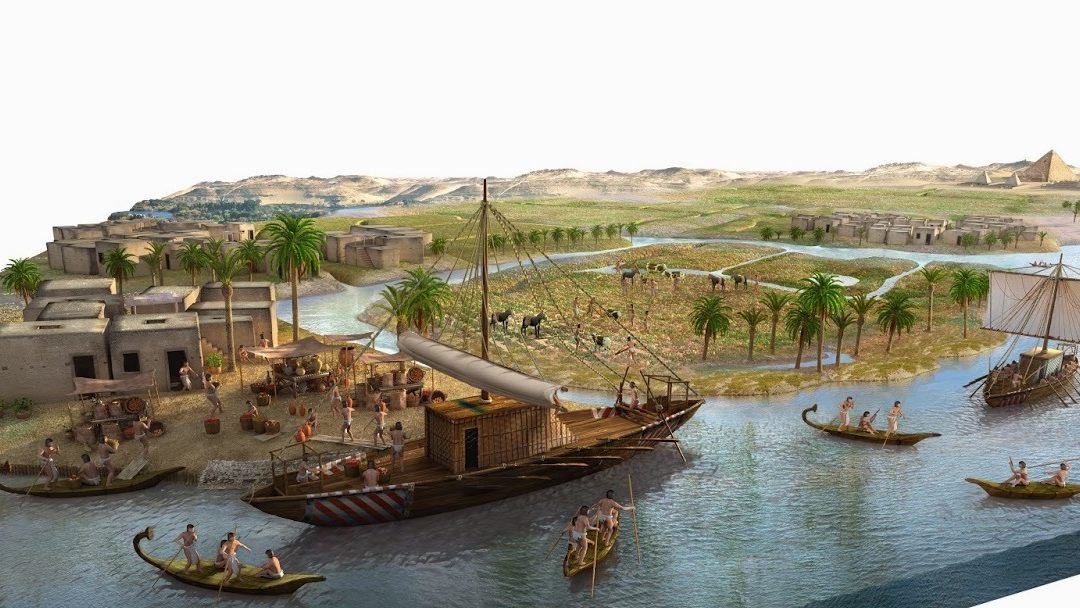 Map with Nile River “Mother of all men”. The fertile banks of the Nile River, favored by periodic flooding, allowed the survival of the ancient Egyptian civilization, which flourished for several centuries.

Considered for a long time the longest river in the world, or at least one of the two longest, has exerted a more than relevant influence in the course of history.

In the words of the Greek historian Herodotus, Egypt was a gift from the Nile.

Where was the Nile River born?

It is a river nestled in the eastern part of the African continent whose basin is home to Uganda, Ethiopia, Tanzania, Rwanda, Burundi, Kenya, Sudan, South Sudan, Eritrea, Democratic Republic of the Congo and, of course, Egypt.

It is made up of 2 river systems: the Blue Nile in Ethiopia and the White Nile in Burundi.

The first has its start at Lake Tana and joins the Blanco in Sudan, through some 1,400 kilometers.

For its part, the source of the White Nile is a bit confusing; it is possible that the Ruvyronza River, a tributary of the Kagera River, is its most remote source.

Except during August and September, the Blue Nile provides less than 20 percent of the water in the Nile. What is the length of the Nile River?

The Nile has an approximate length of 6,853 kilometers, the White Nile being its main source. It is believed to be the longest river in the world.

It flows from south to north and flows into the Mediterranean Sea, in the middle of a large and fertile delta.

Its width is about 2.8 kilometers, and drains a basin of about 3.4 million km2, which corresponds to 10.3 percent of the earth’s surface.

It is worth mentioning that its sources are found in the humid regions of Africa, while to the north, from Sudan, it crosses kilometers of arid lands. How old is the Nile River?

The exact age of the river is unknown; its oldest parts are thought to be related to the swampy region of the Sudd, in South Sudan, where the White Nile runs.

In the Miocene there was already a body of water that has been called Eonilo, which transported sediments to the Mediterranean Sea.

Water could begin to flow into Egypt about 5 million years ago.

Around the time when the Mediterranean decreased its volume, at the end of the Miocene, the river area sank and formed a deep canyon.

Why Nile River is important?

This river has been, more than a simple source of fresh water and food, a navigation route that favors trade and a resource that allows agriculture in an arid environment.

In fact, agriculture is the key economic activity of the basin and has been practiced over more than 5,000 years.

Among the most economically important species in the River Nile are Nile tilapia, Redbelly tilapia and Oreochromis aureus.

The floods of each year constituted the time that provided fertility to the Nile lands, but there are no annual floods in Egypt since the finish of the Aswan Dam in 1970.

The Nile Delta, despite being limited to the south by the desert, is extremely fertile; so many species of plants grow there.

The papyrus plant is one of the best known examples, but many other long-stemmed species, reeds, bamboos, bananas and several types of tropical trees, such as ebony, also grow.

About 129 species of fish are found in the Nile River; of these, approximately 26 do not live in other bodies of water. It’s impossible to overestimate the importance of the Nile to the Ancient Egyptians.

Its fertile valleys provided protection from the harsh elements, its waters teemed with fish and fowl, and the Nile’s seasonal floods deposited mineral-rich silt from the highlands to feed Egyptian soil, allowing for unprecedented agricultural abundance.

This life-giving river, known as Hapi in the age of Ramesses II, was rightfully worshiped as a god.

It was the chief mode of transporting shipments of grain, gold and weaponry across the length of the empire.

Ramesses II even placed his mortuary temple, the Ramesseum, along the banks of the upper Nile in Thebes.

It doubled as a reserve bank and could hold 350 boatloads of grain, ready for shipment in the event of a poor harvest.

The pharaohs relied on astronomer priests to read the stars in order to gauge the timings of seasonal floods, which were essential for agriculture.

Ramesses II used marker stones in the upper Nile to carefully record river levels; he would then send word to the Delta cities when the waters began to swell.

This was a cause for celebration and people sang praises to the gods during epic festivals that marked the start of the floods.

Inundation of the Nile River

The annual inundation of the river Nile every year between June and September made it possible for agriculture that supported the dense population of the river’s lower valley and delta by depositing rich silt along the Nile floodplain. The Egyptians called it Akhet.

The flooding happened because of the melting snow and heavy summer rains in the Ethiopian mountains, sending a torrent of water causing the banks of the river Nile to overflow onto the flat desert land of Egypt.

It was relatively reliable, and the floodplain and Delta were very fertile, making agriculture the most secure and productive in the Near East.

When conditions were stable, food could be stored against scarcity. However, the high floods could be very destructive; sometimes growth was held back through crop failure due to poor floods resulting in population loss.

Nileometers were dotted along the Nile to measure variances in water levels of the river.

Their importance was significant given the entire Egyptian civilization relied on the annual floods – they could mean the difference between feast and famine.

In 1970 when the Aswan High Dam was completed, the annual Nile floods and sediment stopped for most of Egypt’s civilization which lived downstream.

In addition to creating electricity, the dam allowed Egyptians to monitor the flow of water and build upon the Nile’s banks with certainty that it wouldn’t be flooded.