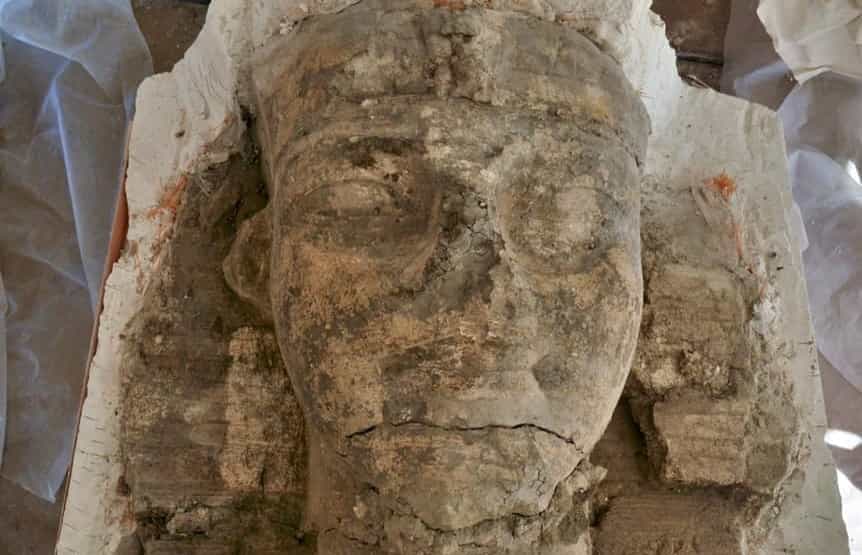 Archeologists discovered two colossal sphinx statues while restoring the ancient Egyptian funerary temple of King Amenhotep III, according to the Egyptian Ministry of Tourism and Antiquities.

King Amenhotep III was a pharaoh who ruled Egypt around 3,300 years ago when it was rich in gold and oversaw a peaceful period of prosperity and growing international power.

The limestone statues measure around 26 feet in length and depict King Amenhotep III in the form of a sphinx – a mythological creature with a lion’s body and a human head – with a royal beard, and a wide necklace, the ministry said.

An Egyptian-German archeological mission found the statues half-submerged in water inside the Luxor temple, known as the “Temple of Millions of Years.”

The team also found three black granite busts of the goddess Sekhmet, a goddess of war also associated with healing which is often depicted as a part lion.

Remains of the walls and columns were decorated with inscriptions of ceremonial and ritual scenes, the ministry said.

Dr. Horig Sorosian, head of the Egyptian-German mission, said in a statement that the large sphinxes indicated the location of a procession road used to celebrate festivals.

After the statues underwent cleaning and restoration, archeologists found an inscription that said “the beloved of the god Amun-Ra” across the sphinx’s chest, referring to the sun god often depicted as a sphinx.

The vast funerary temple, built close to the Nile river by King Amenhotep III, was destroyed by an earthquake that swept Ancient Egypt.

The mortuary temple’s main purpose was as a place for offerings for Amenhotep III for after his death and movement into the afterlife.

The project to restore the temple and the Colossi of Memnon, two massive stone statues of the pharaoh, began in 1998 under the supervision of the Egyptian tourism ministry, it said in a statement.