Home / The mysterious woman behind the mummy of the Golden Lady 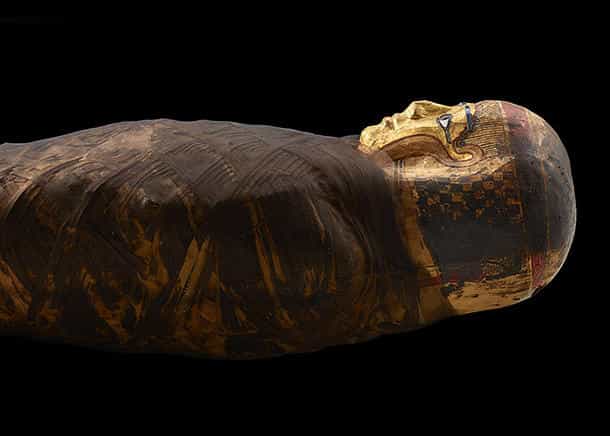 The discovery of mummies always fascinates Egyptologists and civil society itself when looking at such ancient artifacts. Studying them, however, can be an arduous process, as the antiquity of the pieces makes them increasingly sensitive over time.

It is clear, therefore, that the preservation of these ancient bodies profoundly limits the research capacity of archaeologists, who need to overcome these restrictions.

One of the most emblematic cases happened when Mummy #30007 was found. Many decades passed before researchers were able to conduct a deeper study of the sarcophagus — beyond just looking at its exterior.

Because they were concentrated on the outside, the discovery became known as the Golden Lady. The name refers to the details stamped on the mummy’s sarcophagus, containing numerous gold and linen details. She was also wearing a golden headdress, and her facial features were painted.

The Mummy’s coffin was painted in the patterns of the Roman Era in Egypt, between 30 BC and 646 AD. On its face were layers of papyrus covered with gold as a kind of death mask.

According to Egyptologists, this concerns the belief at the time that, after death, a woman would keep her eyes, nose, and mouth intact because she would still need her senses.

The details still allow archaeologists to reach other conclusions about the historical period to which it belonged. When Egypt was a province of the Roman Empire, the mummification process began to suffer from the new influences.

This interaction may explain why she was not in a wooden coffin (common before the Roman era) but in a capsule made of linen and cardboard, which resembled papier-mâché.

Little was known about the Golden Lady at that time, and even today, there is not much information other than her possible physical characteristics and date of death.

Her identity, however, remains elusive: who was this woman embalmed over 1,500 years ago with such rich decoration?

The sarcophagus was never opened. Yet, because the coffin’s contents were very fragile, x-ray images were able to scan its interior using modern computerized tomography equipment and reveal features of the M.

The scans showed that the woman was probably in her mid-40s when she died, had curly hair, and a slight overbite – her lower teeth slightly overlapping her upper teeth.

According to the then curator of the American Museum of Natural History, David Hurst Thomas, responsible for the exhibition in which the Golden Lady is exposed, the technique does not harm the contents of the coffin and also allows researchers to obtain more information about the mummy.

“Scans like these are non-invasive, repeatable, and can be done without damaging the story we’re trying to understand,” Thomas explained.

Specialists at the Field Museum of Natural History in Chicago, USA, used CT scans to perform a virtual reconstruction of the woman’s skull.

With this technology, French forensic artist Élisabeth Daynès was also able to generate a 3D reconstruction of the Egyptian’s face, creating a faithful replica of the Mummy’s face without even opening the coffin.

In addition, researchers were also able to point out possible causes for the Golden Lady’s death. Evidence from the tests suggests that she may have died after contracting tuberculosis, a disease that became common in Ancient Egypt due to its large population.

Still, nothing — or very little — is known about the mummy’s identity. With no identification of her name because there are no hieroglyphs on her tomb that reveal it, technicians at the American Museum of Natural History, located in New York, named the woman “Golden Lady,”; the name by which she is known worldwide. Today, it remains in the collection of the museum in question in the United States.

The 'Egyptian Mona Lisa', the masterpiece painted 4,500 years ago