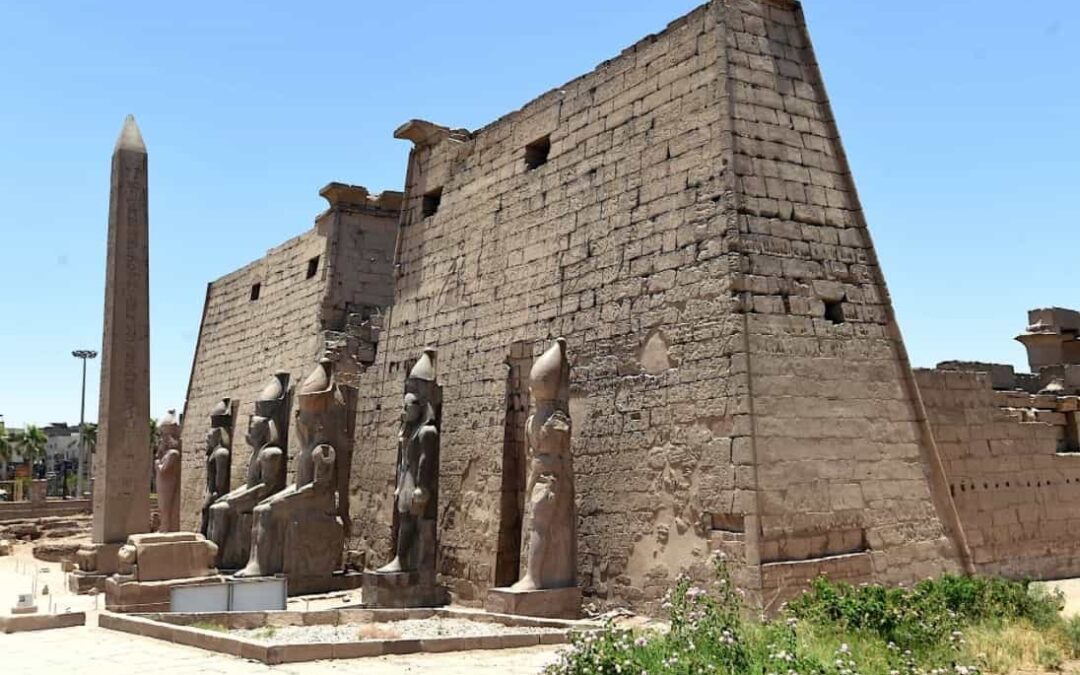 The Luxor Temple. Begun by Amenhotep III and ended by Ramses II , dedicated to Amun-Ra, Mut ( Amun’s wife , represented by a vulture) and Khonsu. It is the sanctuary of ka par excellence.

History of the luxor temple, Egypt

Amun was the local god of Luxor, to make a local god a national one, the priests had to associate their god with two vital elements in the life of the country.

They associated amun with the sun and called it Amun-Ra, and associated him with the Nile, symbolized by the fertility represented by the god Min.

Like every year, the Nile rises in summer and leaves its channel to fertilize its beloved land of Egypt. Amun, who resided in the Temple of Karnak, left his abode carried on the shoulders of his thousands of priests to the river, where he sailed to the abode of his wife, the goddess Mut, in the temple of Luxor.

The result of their union is the god Khonsu, god of the moon, who has his temple behind his father’s temple at Karnak, and the prosperity of the crops for the land of Egypt. The way back was overland, down an avenue of ram-headed sphinxes.

Luxor, ancient Thebes, capital of the Egyptian empire. For political and geographical reasons, Thebes gradually gained importance during the Tenth Dynasty until it became the capital of the pharaohs of the New Kingdom.

There the god Amun was venerated with sumptuous ceremonies in triad with Mut and Khonsu. With each victory, new and great temples were erected in honor of the god.

The ancient Egyptian capital was divided by a canal, to the south of which Luxor emerged, while to the north the town of Karnak spread.

Luxor is today a small city of 60,000 inhabitants, located on the right bank of the Nile, in the place that corresponds to ancient Thebes.

The name of Luxor derives from the Arabic word el-Uqsor, plural of el-Qasr which means camp or fortification, referring to two military camps that were established here in Roman times.

Thebes, which the Egyptians called Uaset, extended into the area that now includes Karnak and Luxor. In this great city (at the time of maximum development it had more than a million inhabitants), capital in the New Kingdom of a kingdom that extended from the Euphrates to Upper Nubia, the god Amun was worshiped in the great temple of Karnak.

Once a year, on the occasion of the feast of Opet the “Feast of the Akhet” or the “Beautiful feast of the Valley”, which was celebrated in the second and third month of the flood season, a solemn procession moved the boat sacred from the temple of Karnak to that of Luxor.”

The latter, whose current total length is about 260 meters, was ordered to be built by Amenhotep III ( 18th dynasty ) on a pre-existing cult building erected in the time of Hatshepsut; the queen had also six pavilions built for the stops of Amun’s boat, the sacred route that linked the temple of Luxor with that of Karnak.

In the time of Hatshepsut, the procession of the feast of Opet followed a land route, crossing the avenue of sphinxes that linked the two temples, while from the end of the same dynasty, the simulations of the sacred boat of Amun, Mut and Khonsu, were transported to the temple of Luxor cross the Nile.

The temple of Luxor, sanctuary of the ka par excellence, measures 260 meters in length and was started by Amenhotep III and finished by Ramses II. It is linked to the Karnak temple by a long avenue adorned with ram-headed sphinxes once, replaced by human-headed sphinxes during the Thirtieth Dynasty.

At the entrance of the temple stands the monumental pylon built by Ramses II, which has a front 65 meters long. In it are carved the bas-reliefs that relate the military campaign of Ramses II against the Hittites and the famous “Poem of Pentaur” is engraved, which celebrates the exploits of the warrior pharaoh.

In front of the pylon, there were formerly two obelisks of Ramses II that rose to the sky to dissipate the harmful forces and attract the celestial powers towards the temple, of which today only the one on the left remains, 25 meters high, since the other it was transported to France in 1833 in the center of the Place de la Concorde.

Surrounding the entrance, two of the six initial colossi, made of granite 15.50 meters high on a 1 meter pedestal, represent the pharaoh sitting on his throne, who guards the access to the temple of ka.

Once through this triumphal entrance, one arrives at the court of Ramses II, adorned by a double row of columns with papyrus capitals, with statues of Osiris in the intercolumniations.

The court also houses the small temple of Tuthmosis III, made up of 3 chapels dedicated to the triad of Amun, Mut and Khonsu.

An imposing 25-meter colonnade then leads us into the court of Amenhotep III, surrounded on three sides by a double row of papyrus columns.

The outer part of the temple also has interesting aspects, with its walls equipped with numerous side chapels whose walls are adorned with scenes of religious ceremonies and, here too, with scenes of the battle against the Syriac-Hittite coalition.

Mysteries Of ancient Egypt: The Unfinished Obelisk Of Aswan