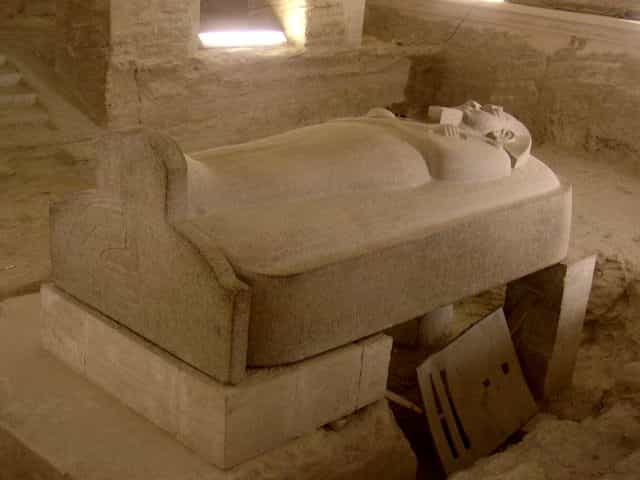 Merneptah was the fourth pharaoh of the Nineteenth Dynasty of ancient Egypt. His reign, of about ten years, elapses between 1213 BC and 1203 BC.

His birth name means ‘Beloved by Ptah, joy is truth’, while his pharaoh name means ‘The soul of Ra, dear to the gods’.

Merneptah is the thirteenth son of Ramses II, and fourth of his second wife Isis-Nefert (Isetnofret); He was the one destined for the succession due to the death of his older brothers.

He was married from his youth to Isis-Nefert II, and he also married Bint-Anat II. The community of Egyptologists usually agrees that Merenptah was the father of Seti II, as well as of the princes Khaemwaset, Isetnofret and Merenptah.

Probably, due to the advanced age of his father, unfit for the time, he exercised very important functions before reigning.

When acceding to the throne he was already old, since he was around sixty years old. He moved the capital of Pi-Ramesses, his father’s capital, back to Memphis, where he built a royal palace near the temple of Ptah, a palace excavated in 1915.

Apart from putting down a revolt in Syria, Merenptah carried out many military campaigns during his rule, fighting mainly against the Libyans who, with the help of the Sea Peoples, began to threaten Egypt from the west.

In the fifth year of his reign, Merenptah led a six-hour battle in which he achieved victory against the allied forces of the Libyans and the Sea Peoples in the city of Perira, probably located on the western margin of the Delta.

The account of this campaign against the Libyans and the Sea Peoples was written on a wall next to the sixth pylon at Karnak (Wall Stele), at the same time that it appears in verse on the Merenptah Stele.

At the end of this stele, Merenptah claims that he defeated all the invaders, killing 6,000 enemy soldiers and taking 9,000 prisoners.

The king probably died a natural death around 1203 BC, but they did not find his body inside his tomb, KV8. In 1898 they discovered his supposed mummy along with 18 others, inside the tomb-cache KV35, of Amenhotep II.

The mummy was taken to Cairo and analyzed by Dr. Elliott Smith. From this analysis he was able to verify that Merenptah suffered from osteoarthritis and arteriosclerosis, and that he was almost completely bald.

The overall look of his face resembles that of Ramses II, but the shape and dimensions of his skull coincide more with his grandfather, Seti I.

What does Tutankhamun's death mask represent?