What does Tutankhamun’s death mask represent? 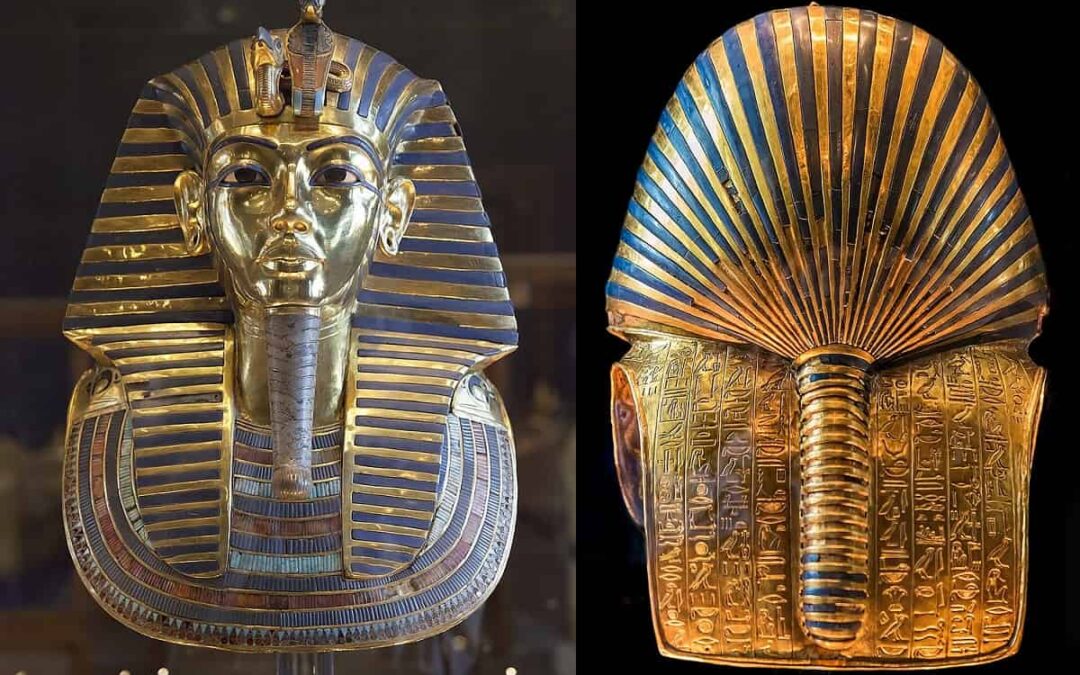 The Mask of Tutankhamun is a funerary mask made of gold and precious stones. It is considered the most recognized piece of Egyptian art.

The ancient Egyptians were characterized by making different objects for funeral rites, such as the same mummies, death masks, protective statues and all kinds of elements, since they believed in life after death.

Found by archaeologist Howard Carter in 1925 along with the rest of the pieces discovered inside the tomb (classified as tomb KV62 and the only one that has been found intact to date), it is striking for its perfection and preciousness.

Made by goldsmiths and dated between 1354-1340 BC, it is also considered the best-known piece of Egyptian art in the world.

The mask represents the face of the young pharaoh in an idealized way, as a “living image of Amun” (the pharaoh who belonged to the 18th dynasty and whose reign extended from 1336/5 to 1327/5 BC) and was found arranged on the face of the mummy to protect it.

Made with a polychrome technique and for which precious materials were used, among which we can find gold, obsidian, turquoise, glass, lapis lazuli, quartz and cornelian, it has a height of about 54 centimeters and a weight of 11 kilos.

Although Tutankhamun was not a notable pharaoh during his reign, barely 9 years old, the discovery of his tomb at the beginning of the 20th century and the wonders that were found in it has placed him on the front page of historical research since.

The funeral mask is made of pure gold and weighs 11 kilos. It measures 54 centimeters high, 39.3 centimeters wide and 49 centimeters deep.

It is made of two layers of high-caliber gold, which are between 1.5 and 3 millimeters thick. In X-ray investigations, the funeral mask was shown to contain two gold alloys: one 18.4 karat for the face and neck and the other 22.5 karat for the rest of the mask.

Gold not only represents the immense wealth of the pharaoh, but it is also used for its similarity to sunlight, so it would also provide the powers of the solar deities. Gold is a metal that does not deteriorate or lose its shine and the ancient Egyptians thought that it was the “skin of the gods.”

Tutankhamun’s mask covered the face of his mummified body, and as the archaeologist Howard Carter himself wrote in his diary when he found it, it has features of the god Osiris mixed with the sad but calm features of the young king, placid and beautiful, with his eyes open, looking at the skies.

This face is the same that was found in other statues and elements inside his tomb, particularly in the guardian statues of the mummified king.

This represents that King Tutankhamun reigned over Upper and Lower Egypt.

The ears of the mask are pierced to wear earrings, which is often reserved for children and women in almost all works of Egyptian art that we know.

In addition to this, on the solid gold cover of the mixture there are inlays of various precious stones, among them lapis lazuli- around the eyes and on the eyebrows; quartz- in his eyes; and obsidian- in the pupils.

Other precious stones in the funeral mask are carnelian, turquoise, amazonite; in addition to china and glass in different places, as in the necklace.

In addition, the mask has a protective spell engraved on its back, which corresponds to Spell 151B of the Book of the Dead, which provides protection to Tutankhamun invoking the gods Anubis, Osiris, Horus and Ra, during his passage to life after death.

Where is Cleopatra's tomb?