Home / The mummy with the golden tongue 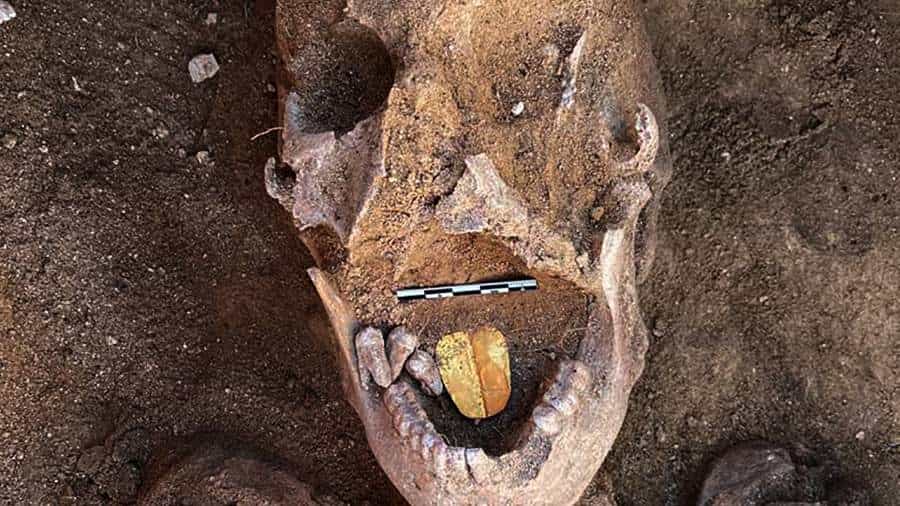 16 Egyptian tombs from the Ptolemaic and Roman times have been discovered in Alexandria (Egypt). The mummies are in poor condition, but among them one stands out whose false tongue is made of gold.

An archaeological mission of the University of Santo Domingo has discovered 16 tombs of some 2,000 years old in the subsoil of the temple of Taposiris Magna, in Alexandria (Egypt).

They are sarcophagi carved directly into the rock below, a type of burial that was popular during the Ptolemaic period (323-30 BC) and early Roman times.

The mummies have been found “in poor condition”, as announced by the Egyptian Ministry of Tourism and Antiquities, but they have given some surprises.

The most striking has surely been a mummy with a gold amulet in the shape of a tongue placed inside its mouth. This had a specific function, that of allowing the deceased to speak with Osiris -the god of the Hereafter-, and it is a rare find, which suggests that he was a very important person in life.

Other mummies wore funerary masks, necklaces, or were wrapped in cardboard, a material composed of papyrus and linen that was used to wrap the mummies and was decorated with images related to the afterlife.

The identity of the mummies

All these findings suggest that the necropolis was intended for people at the top of Egyptian society.

The fact that they were buried in such an important temple – dedicated to Osiris, one of the main deities of the country – and according to Egyptian tradition also seems to indicate that they were public figures.

Along with two of the mummies, papyrus scrolls have been found that are being deciphered and that could shed light on the identity of their owners.

The heads of some statues that, according to the researchers, represent the deceased have also been recovered.

The temple of Taposiris Magna was founded around 280 BC by Ptolemy II Philadelphus, the second pharaoh of the Ptolemaic dynasty, so it has a close connection with the royal family.

This place had already made the news in 2002 for the discovery of gold coins minted during the reign of Cleopatra, a discovery that led to suggest that the last queen of Egypt could be buried in this temple.

However, this possibility was ruled out by the archaeologist Zahi Hawass, who years later would be Minister of Antiquities.