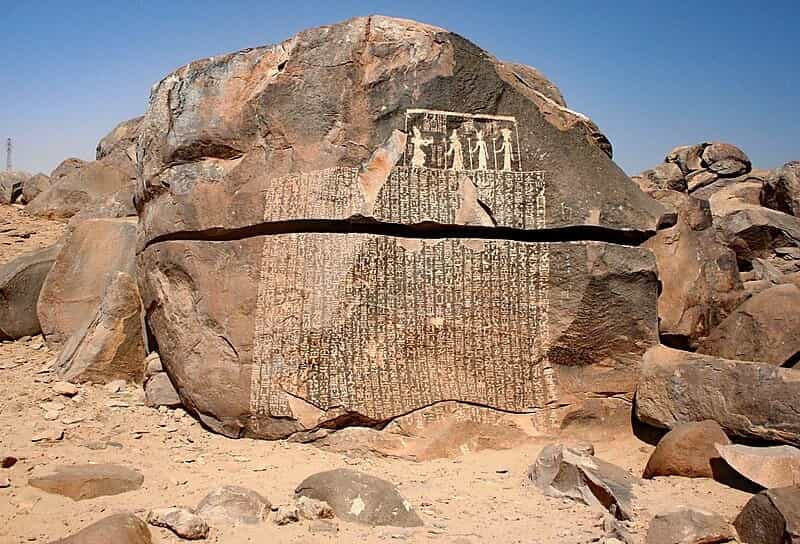 In 1889 the journalist and Egyptologist Charles Edwin Wilbour, who for about ten years had spent every winter in Egypt aboard a dahabiya (a typical Nile passenger boat with two sails) that he had converted into his home and library, visited Aswan and its surroundings.

But in that same expedition Wilbour also approached another island, that of Sehel, located in the Nile about 3 kilometers southwest of Aswan, before the first cataract of the river.

In it there are numerous archaeological sites and a temple, that of Anuket, the Egyptian goddess of water and the Nile falls. But the place was mainly a granite quarry used since ancient times and at different times.

For this reason, there are numerous inscriptions on the stones and boulders, left mainly by workers, but also by travelers who began or ended their journey to Nubia there. Some narrate historical events. And precisely Wilbour was going to discover one of the most curious of all.

The inscription is found on a rocky outcrop at the southern tip of the island, inscribed in a large block of natural granite whose surface was prepared by cutting it into a rectangular shape.

A large fissure, which already existed at the time the inscription was created, divides the rock into two parts. Some areas are damaged, making some parts of the text unreadable.

It is written in hieroglyphs arranged in 42 columns. In the upper part three deities are represented; Khnum (the creator, represented with the head of a ram), Satis (a goddess, personification of the floods of the Nile) and Anuket (goddess of water and waterfalls). In front of them Pharaoh Djoser brings them offerings.

The inscription was translated by various scholars, the first being Heinrich Kark Brugsch in 1891. However, today the version on which there is more consensus is that of Paul Barguet, scientific director of the Franco-Egyptian Center for the Study of the Karnak Temples, who examined and translated it in 1953.

The text recounts the seven-year period of drought and famine that took place during the reign of Pharaoh Djoser of the Third Dynasty, the builder of the Step pyramid who reigned around 2665-2645 BC.

The drought began in the 18th year of his reign, caused because the Nile did not flood the farmlands and therefore there were no crops.

The pharaoh then entrusted his vizier Imhotep to investigate where the god of the Nile was born, who was in charge of causing the flood annually.

This, after consulting the archives in the temple of Thoth in Hermopolis, informs him that the rise of the Nile is the work of the god Khnum, who resides in a sacred spring on the island of Elephantine.

Imhotep travels to the temple of Khnum in Elephantine and while praying to the god he has a dream. In it, Khnum is introduced to him and describes his divine powers.

He then promises the vizier to make the Nile flow again. Imhotep wakes up and writes down everything that Khnum has told him to tell pharaoh Djoser.

“I was grieving on my great throne, and those in the palace were grieving. My heart was in great pain, for the Nile had not arrived in time for seven years. The grain was scarce, the seeds were dry, everything that could be eaten was in short supply… Then I took pleasure in looking back and questioned the chief priest, Imhotep. Where does the Nile originate? I asked him, what god rests there, to support me? (Imhotep replied 🙂 There is a city in the middle of the water; the Nile surrounds it. Her name is Elephantine; Khnum is there”

Before the vizier’s account, the pharaoh orders priests, scribes and workers to restore Khnum´s temple and to once more make regular offerings to the god.

Furthermore, by decree it grants him the territory between Aswan and Tachompso, and a part of all imports from Nubia.

However, the Famine Stela does not date from the reign of Djoser, or even that of any of his immediate successors.

Researchers believe it was made during the time of the reign of the Ptolemies, the Greek rulers of Egypt after Alexander the Great, between 332 and 31 BC. That is, more than 2,300 years after the events that it narrates.

Specifically, it would belong to the reign of Ptolemy V (205-180 BC), and its creators would be the own priests of the temple of Khnum, who thus tried to justify their dominion over Elephantine Island and the surrounding regions.

For this they used a common motif in almost all the cultures of the Near East.

For this reason, for a time the inscription was considered a forgery of the priests. Today some Egyptologists believe that the facts it relates are true, others believe that they are fiction.

In any case, the stela is important because in it the pharaoh is mentioned by his Horus name, Netjerikhet, which allows researchers to relate those monuments that only have this name inscribed with Djoser.