Home / The discovery of a mural dedicated to Egyptian goddesses, buried under thick layers of bird poop 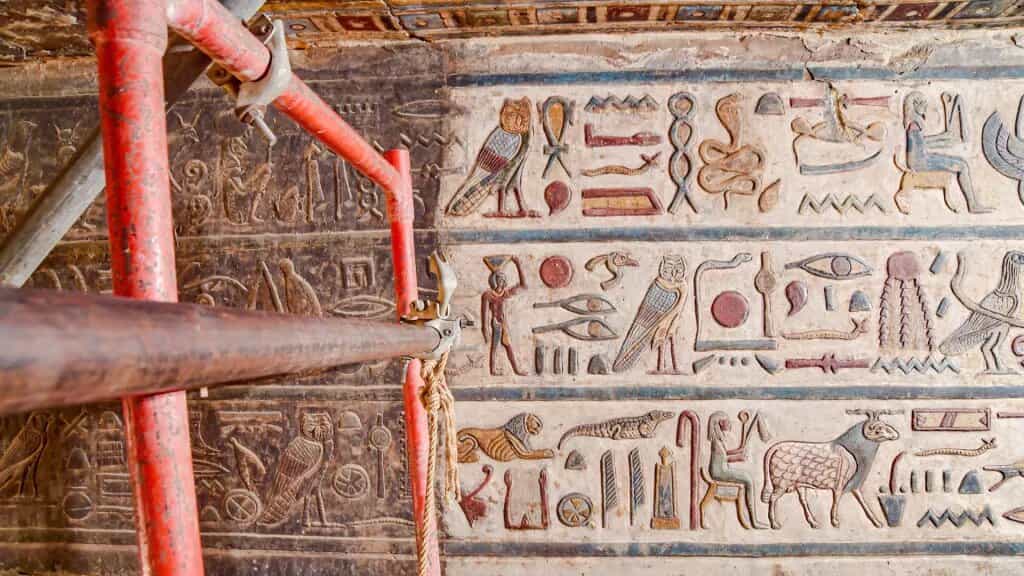 Forty-six representations of ancient Egyptian goddesses were found in a mural completely covered in bird dung in an ancient temple.

During ancient times, the ancient Egyptians built Esna on the west bank of the River Nile: the city that served as a center of power in Upper Egypt. While they were in office, public buildings and temples were decorated with ornate murals dedicated to gods from the sacred pantheon. Over time, the ancient ceremonial centers became covered in sand, dust, and animal feces.

Beneath a thick layer of soot and bird droppings, a team of archaeologists ‘unearthed’ a polychrome mural. In it, hieroglyphs were engraved in honor of the gods of water, fertility, and sacred animals. This was what they found…

The Temple of Khnum, as the site is currently identified, is one of the best-preserved examples of Egyptian sacred architecture. Located on the west bank of the River Nile, it was erected in the time of Pharaoh Ptolemy VI, during the second century BC.

Despite the rescue efforts made by the local government, however, some of the spaces are still run down.

On one of its walls, archaeologists from the University of Tübingen discovered forty-six representations of ancient goddesses worshiped two-thousand-two-hundred years ago. Live Science reports speculated that these paintings were used for at least four hundred years.

The leader of the study, archaeologist Christian Leitz, was surprised by the quality and state of preservation of the mural dedicated to the ancient Egyptian goddesses.

Despite the soot and fecal remains, it had retained its original colors and lines. Even so, the surface had to be cleaned with alcohol to make the colors shine even more.

In honor of ‘the Two Ladies’

The Tübingen research team discovered that the mural paintings depict two main Egyptian goddesses. The first is Nekhbet, symbolized by a vulture.

The second is Wadjet, a cobra-headed goddess with wings. Each represents Upper and Lower Egypt. Collectively, they are known as ‘the two ladies’.

Both were considered protection deities, as the authors explain:

“The glory of the color used in the representations of the Two Ladies, Nekhbet and Wadjet, which has now been revealed, was previously unknown to experts,” according to a statement published by the University of Tübingen.

In the mural’s original state, researchers were unable to study the paintings properly. However, when the soot and manure were removed, the mural shone in all its former grandeur. “What is extraordinary here are the colors of the paintings”, concludes Leitz.