Home / Omm Sety: The British Egyptologist Who Met Seti I 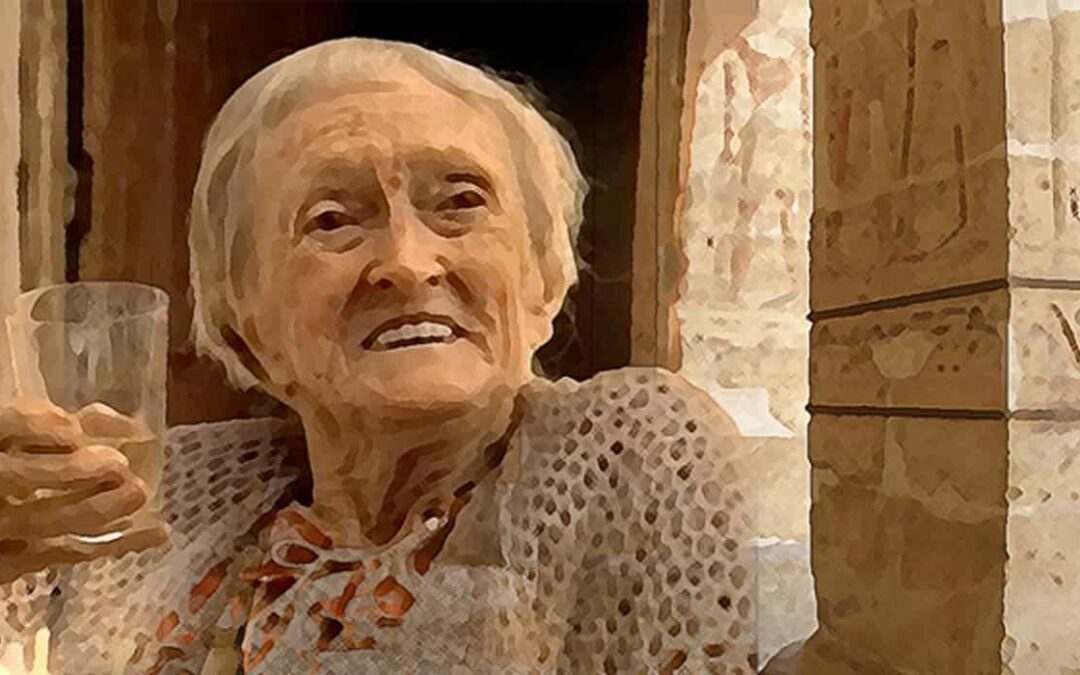 Dorothy Louise Eady, known as Omm Sety, dedicated her life to the study and preservation of the temple of Seti I at Abydos. This woman, respected by Egyptologists around the world, claimed until the end of her days that she was the reincarnation of an ancient Egyptian priestess.

Dorothy Louis Eady (1904-1981), better known as Omm Sety, has been one of the most controversial figures in modern Egyptology. This Briton spent most of her life caring for the temple of Seti I (the father of the great Ramses II) in Abydos and saying that she was the reincarnation of a priestess named Bentreshyt.

This extraordinary story began when, at the age of three, Dorothy had a serious accident at her London home. The little girl fell down the stairs and the doctor who came to help her could only certify her death. But an hour later, the girl had regained her life and was just playing on the bed. Years later she herself would affirm that “someone” returned from the remotest past to revive her.

I want to go home!

A year after her accident, in 1908, the girl began to have strange dreams in which she saw a large building surrounded by columns and lush gardens full of fruit trees. When she woke up, she would tell her parents in despair, “I want to go home!” Her parents did not understand anything about what was happening to her daughter and they did nothing but ask her questions that Dorothy did not know how to answer.

But it soon came to light what was tormenting little Dorothy. During a visit to the British Museum accompanied by her parents, when the family entered the room of Egyptian antiquities, the girl ran to kiss the feet of the statues to the astonishment of all, while exclaiming that these were her people and that she wanted to return to her house in Egypt.

But where did all this come from? Dorothy herself was shocked by what was happening to her, until one day, in a local newspaper, she saw a photograph of the Osiris temple in the city of Abydos, in Egypt. She recognized it immediately, since it was the place that, according to her, recurred in her dreams.

The visit of Seti I

At the age of 14, Dorothy had a real revelation that “dispelled” all her doubts. One night a figure dressed in a white tunic and a blue cape appeared to her: it was Pharaoh Seti I, the same monarch who ordered the construction of the Abydos temple.

From then on, the young woman, only ten years old, began to study Egyptology with the same Ernest Wallis Budge, curator of the British Museum, and she learned to read hieroglyphics.

For the next ten years, Dorothy received some messages every night of the full moon by means of automatic writing (a type of writing that does not come from the conscious thoughts of the writer).

According to her, her messages were dictated to her by a certain Hor-Ra, that revealed to her who she was in her past life. According to Hor-Ra, Dorothy was an Egyptian girl named Bentreshyt, raised from the age of three in the temple of Abydos. Her father was a military man and her mother was a modest greengrocer.

At the age of 27, Dorothy began working at an Egyptian public relations magazine, writing articles against colonialism and in favor of Egyptian independence.

There she met the young Egyptian Abd El Megid, whom she married. Shortly after, at the age of 29, determined to go in search of her past, Dorothy and her husband embarked in 1933 for Egypt.

The ship docked in the Egyptian port of Port Said, from where a train took the couple to Cairo, where the young couple settled. The couple had a son whom Dorothy named Seti.

She from that moment on was known, as was traditional in Egypt, as Omm Seti (Seti’s mother).Two years later, Abd el Megid received a job offer in Iraq, but Dorothy did not want to accompany him, so the couple ended up separating.

Dorothy moved with her son to the village of Nazlet El Simanm, near the Giza pyramids, and got a job at the Department of Egyptian Antiquities as a document writer, the first woman to do so.

She was hired by Dr. Selim Hassan, discoverer of the tomb of Queen Khentkaus I. Dorothy was in charge of proofreading, indexing and illustrating three of the ten volumes on the discovery.

She organized the Egyptologist’s library and continued to perfect her studies on hieroglyphs. She translated the Aegyptische Worterbuch encyclopedia into English., and even embroidered, together with the doctor’s wife, ten large rugs that recreated scenes from ancient Egypt. Nine of them are preserved today in the Wilbour Library of the Brooklyn Museum in New York.

Dorothy lived for twenty years in the Memphis area, working on various archaeological missions in Giza and Dahshur. She wrote numerous articles on the excavated monuments.

It is surprising to think that Omm Sety did not travel to Abydos, her ultimate goal, until 1952. Finally, in 1956, she was sent there permanently by the Egyptian Antiquities Service to work as a draughtswoman.

In Abydos, Omm Sety would finally find her purpose in her life. She lived until the end of her days in a modest adobe house next to the temple of Seti I, accompanied only by several cats, a goose, a donkey and the occasional snake.

When Omm Sety arrived at Abydos, the temple was in a very poor condition. Her job was to catalog and translate the engraved blocks from the temple of Seti I, both those scattered on the floor and those he had kept in storerooms.

“They presented me with a lot of fragments of written stones, there were more than 2,000, some very large and others very small. The job consisted of copying the inscriptions, cataloging them and, when possible, matching one with the other…”, Omm Sety would comment of her work in an interview for National Geographic.

With infinite patience, this woman managed to reconstruct the 2,000 blocks of reliefs that remained scattered on the floor of the temple. She was even able to locate the remains of the ancient garden that once stood in the temple and that she had seen so many times in her dreams.

Over the next few years, Omm Sety continued to work for the Antiquities Service, guiding tourists in the Seti temple and doing embroidery.

In fact, the Egyptian authorities of the time never considered her crazy, on the contrary, they even said that she was “indispensable for any archaeological mission or serious work in the Abydos area”.

Shortly before her death, Omm Sety participated in a couple of documentaries for television. One of them, for the BBC and the other, for National Geographic. Omm Sety died in Abydos on April 21, 1981.