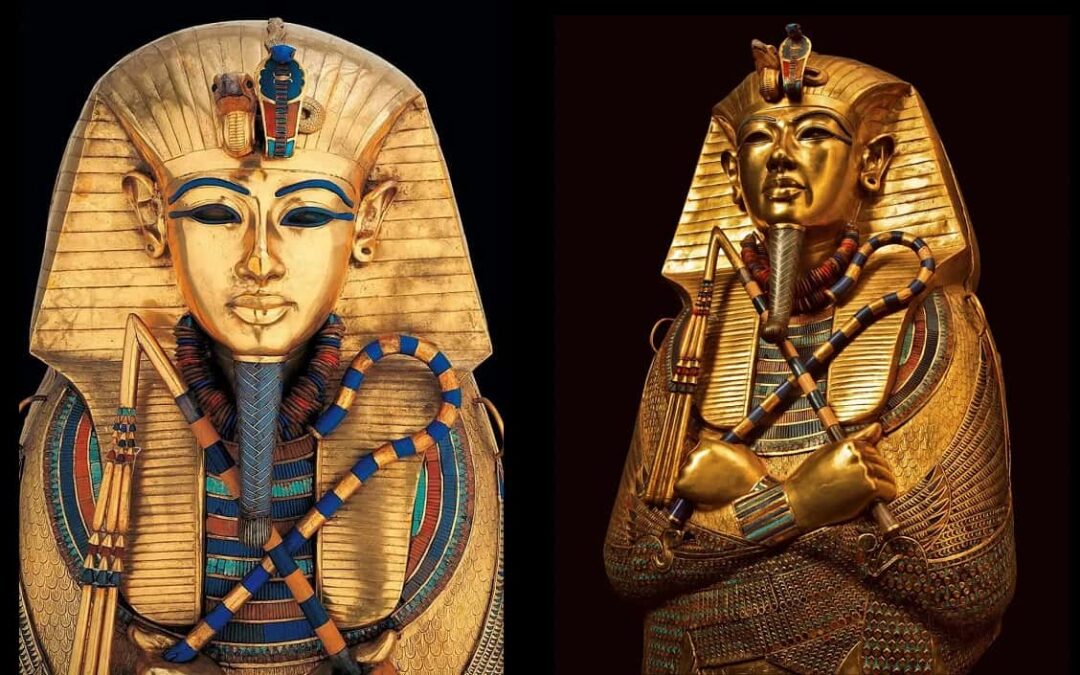 The innermost coffin of Tutankhamun is a stunning piece of ancient Egyptian art and craftsmanship. Made of solid gold, the coffin is adorned with intricate engravings, inscriptions, and inlaid semiprecious stones and colored glass.

The shape of the coffin is that of the god Osiris holding the sacred heka scepter and flail, with a vulture and rearing cobra protecting his forehead and divine beard made of gold inlaid with blue glass.

The body of the coffin is protected by deities of Upper and Lower Egypt with their wings. Weighing 110.4 kilograms, the coffin held the king’s mummy, which was covered with the iconic gold mask of the boy king.

This innermost coffin is the third of three mummiform coffins of Tutankhamun and was transferred to the Egyptian Museum Cairo soon after the discovery of the tomb in 1922.

The outer gilded coffin was left inside the tomb, but it was transferred to the Grand Egyptian Museum (GEM) for restoration and preservation and will be displayed alongside the two other coffins for the first time since their discovery.

Tutankhamun, also known as the Golden Pharaoh, was a young king of the 18th Dynasty of the New Kingdom whose death and intact tomb have captivated people for decades.

The tomb was discovered in the Valley of the Kings on the west bank of Luxor in November 1922 by British archaeologist Howard Carter, and it received worldwide press coverage at the time.

The king’s burial chamber was 6m x 4m wide and housed the king’s outermost rectangular-shaped quartzite sarcophagus, which was decorated with figures of the four deities of protection and safeguarding the sarcophagus and the king’s mummy.