Pectoral and Necklace of Princess Sithathoryunet 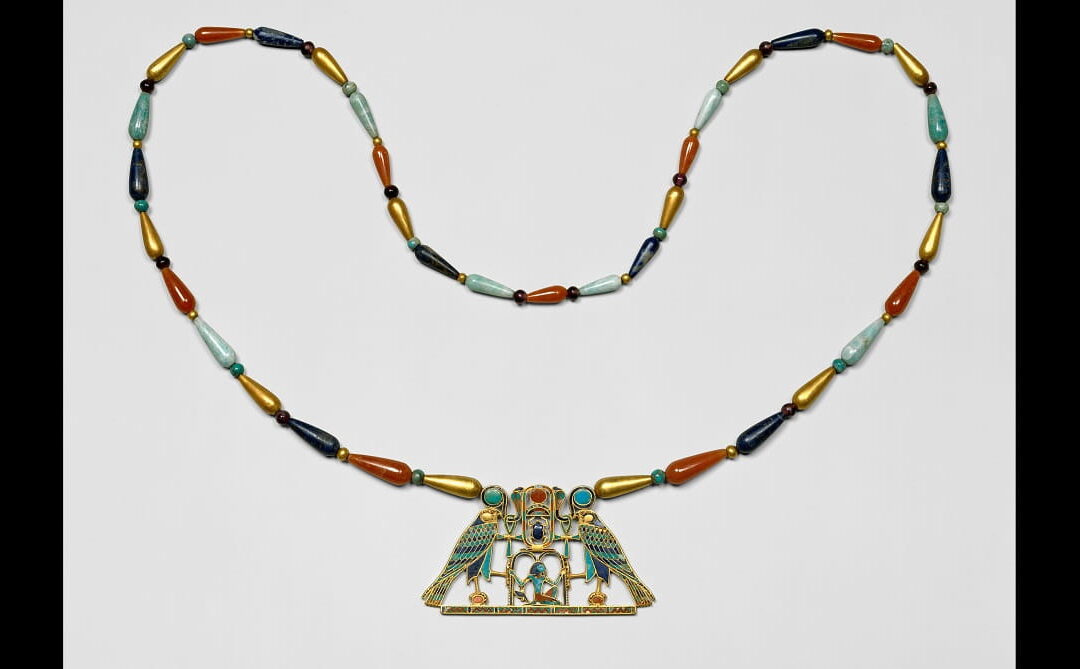 The pectoral of Princess Sithathoriunet is a stunning piece of jewelry made up of 372 carefully cut semiprecious stones and hieroglyphic symbols.

It was found in the princess’s underground tomb located next to the pyramid of King Senusret II at Lahun.

The pectoral, made in the cloisonné style, features a heraldic design full of symbolism. The base bar includes zigzag lines representing the primordial waters from which the primeval hill emerged.

The falcons, symbols of the sun god, each hold a circular hieroglyph meaning “encircled,” declaring the solar deity’s supreme power over the universe. The same hieroglyph, in the form of a cartouche, surrounds the throne name of Senusret II, Khakheperre.

Flanking the king’s name are two ankh hieroglyphs, symbolizing “life,” suspended from cobras whose tails are wrapped around the sun disk on the falcons’ heads.

These snakes represent Nekhbet and Wadjet, the traditional protector goddesses of the king. Supporting the royal cartouche is the kneeling god Heh holding two palm ribs symbolizing “millions of years.”

This design represents the king’s life and existence in time as part of a universe created and maintained by the supreme sun god.

Jewelry worn by royal women during the Middle Kingdom served more than just decorative and status-related purposes. It was also symbolic of the myths and concepts surrounding Egyptian royalty and imbued the wearer with superhuman powers.

These powers enabled royal women to support the king in his role as guarantor of divine order on earth. In this case, it is believed that the king himself benefited from the magical powers inherent in the jewelry worn by the female members of his family, which is why his name appears in the designs rather than that of the princess.

It is thought that Princess Sithathoriunet was the daughter of King Senusret II due to the close proximity of her tomb to his pyramid. The presence of items bearing the name of Amenemhat III in the tomb suggests that the princess lived during the reigns of three powerful rulers of Dynasty 12: Senusret II, Senusret III, and Amenemhat III.

This pectoral dates back to the Middle Kingdom, 12th Dynasty, and the reign of Senusret II, around 1897-1878 BC. It is now housed in the Metropolitan Museum.

The Colossal Statue of Amenhotep III and Tiye